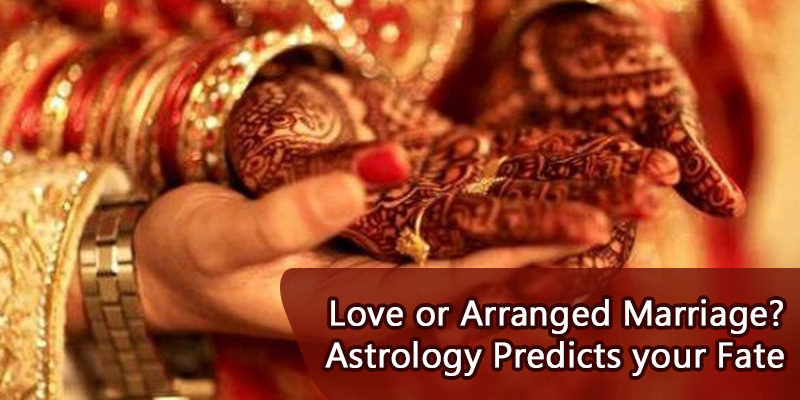 Everyone says marriages are made in heaven and rightfully so. As far as astrology is concerned, it is true. Natives would always be inquisitive to know if he/she would have a love or arranged marriage. At such a time, Astrosage is the best place to get this answer. A person on the verge of getting married would approach an astrologer with the question first as to when will I get married and secondly whether it will be a love or arranged marriage?

In this marriage system, the decision of parents is primary and that of the bride or groom is secondary. In our society, first of all, the bride’s father initiates the selection of the groom. Selection is done on the basis of health, education & Income of the groom. These are the major criterias for selection. Secondary criteria are the family and the social status of the parents of the groom. If these are favorable, matchmaking is done with the girl and marriage is finalized.

Love marriages are not new to India. In today’s modern world, there has been an increase in love marriages. This is because of the freedom given by society to the fair sex to get educated and also earn a living for them. This helps both the persons to mingle with each other and get to know eachother better due to their social interaction.

The Vedic astrologer at AstroSage will make a thorough study of the various planets and houses to give proper marriage predictions.

Let’s have a look at which planets and houses are responsible for love marriage.

Click Here to Know the Rituals and Rites of Tulsi Vivah

The strength of Mars should be examined while judging female horoscopes. If the 2nd, 7th & 11th house lords are connected with mars so the arranged marriage will be with the help of the brother. If with Mercury, it will be with the help of maternal uncle or relative, and if the planet is Jupiter so the person could be an elder from the family of the native.

To check for love marriage, we need to study the 7th House and its Lord:

The influence or positioning of planets like Venus, Mars or Moon on the 7th House would give you a marriage partner of your choice.

Next we need to focus on the planet Venus which signifies love and romance. We now study the association of Venus with Rahu, Moon, Mars, Lord of the ascendant, 5th, 7th and 12th House.

If Venus is found positioned in the 1st, 5th, 7th, 8th, 10th or 12th House, you would be leaning towards love affairs and as per the combination of the planets have a love marriage also.

The next planet we study is the Moon as it is the Karaka of our mind. Our acting and thinking depends on the position in the various Houses.

· If Moon is found to be under the aspect of the planets Venus or Mars, it gives interest in the opposite sex and could give marriage with your loved person.

· If the Moon is positioned in the 5th , 7th or 12th House, then chances are that you would marry a partner of your own choice.

For the third marriage, we have to consider the 8th house from 2nd i.e. 9th house from Lagna. So we need to analyse the condition of the 2nd house and its lord in the birth chart as well as in the Navamsa chart. Some people consider 9th house as the house of second marriage in astrology because 9th is the 3rd from 7th. They consider the second spouse to be a sibling of your first spouse. Some people also advise using the 11th house as the house of second marriage astrology.

Astrological Reasons for Delay in Marriage

As far as marriage is concerned, Venus and Jupiter are extremely important planets. Jupiter plays an important role in predicting the time of the marriage. While Venus’ weak position may bring delays in marriage whereas a well placed Venus will not only improve the chances of your getting married but it will also ensure you a happy married life.

What Are the Astrological Solutions for the Delay in Marriages?

Astrology not only tells the reasons for the delay in marriage but it also offers solutions for delays in marriage. Hence, the right approach is what we need to ensure if we have the maleficent planets that have been the cause of late marriage.

A proper analysis of the birth chart of a person that can help know the powerful astrological solutions for delayed marriage. It can help you to get married sooner and minimize the problems. Solutions for a late marriage revolve around the seventh house of the Kundali governed by the planet Venus.