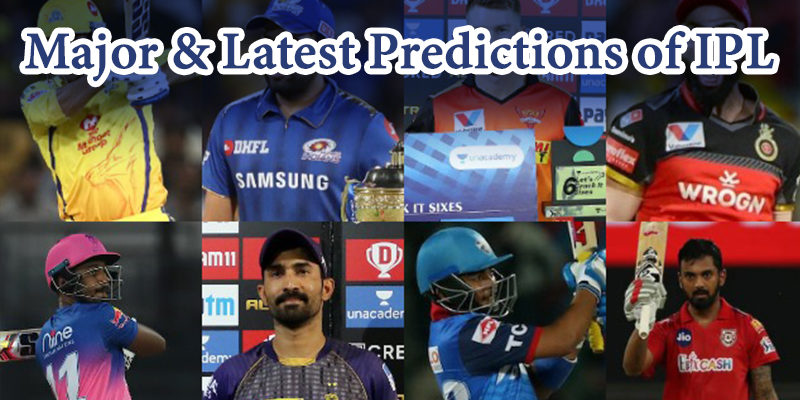 IPL, the grand festival of cricket lovers is back in the bay. The Covid situation was under control when the IPL dates were announced, but now that the IPL is on the threshold of commencement, Corona cases are not doubling but quadrupling. The news has come to the fore that, after some players and groundsmen of Mumbai’s Wankhede Stadium recently tested Corona positive, not one but 14 employees of Star Sports are in the grip of Corona infection now.

In the midst of these ever increasing cases of Corona, IPL’s commencement seems to be quite a task once again this year. Well, time will only tell how the matches will be played this year while keeping in mind the safety of the public, all the players and the people associated with the IPL. Having said and done everything, it can be assured that Corona terror will not let the excitement of the IPL fade. AstroSage understands your cricketing spirit and that’s why we have brought to you some exclusive predictions from 4 selected and well-known astrologers on our panel just before the commencement of the tournament.

Know More About this Season of IPL, Connect With World’s Best Astrologers On Call

Scroll down to get the next big predictions of IPL 2021 and find out which team will make it big , which player will strike a century this year and many others you need to know about IPL 2021. Let’s read what the best astrologers in town have to say.

First and foremost, we will put forth the predictions of Acharya Sunil Barmola.

Acharya Barmola says, “This season of IPL is going to be an exciting one if one looks at the Prashna Kundli this year. According to Prashna Kundli, there is a probability of a lot of upheavals taking place throughout this season of IPL and the venue of the matches may also get altered. Also, as Prashna Kundli suggests, there will be many disappointing situations in the IPL matches this year. Prashna Kundli’s ascendant, Gemini ascendant and Moon being in the eighth house shows that there will be frequent problems during the matches. Also, the dates fixed for the IPL match are very much likely to get postponed.

As per the Prashna Kundli, the conjunction of the planet Venus with the Sun, and most importantly Venus being the significator of sports, shows that the players may have to face a lot of problems during the matches. These can also result in the change of venues repeatedly. For instance, if the match is decided to take place in Mumbai, then suddenly it can be shifted elsewhere.

Winner – Prashna Kundli suggests that due to the presence of Chandra Revati Nakshtra, the winner of this year’s IPL can be Team Chennai.” – Acharya Sunil Barmola

Acharya Mragaank says, “ The year number(2021) is 5 (2 + 0 + 2 + 1 = 5) which comes under the governance of Mercury. Apart from this, this is the 14th season of IPL whose sum is also 5 (1 + 4 = 5) , again a number which gets ruled by Mercury. A total of 8 teams are participating in this tournament. 8 is the number of the planet Saturn. This good combination of number 5 and number 8 shows that this year’s IPL will gradually gain its popularity. With the influence of Mercury, the IPL tournament will win the hearts of the people and this year’s IPL will be seen mostly on social media. Apart from this, IPL will get more coverage from the media and the tournament will remain the talk of the town. While Mercury is considered to be quick and witty, Saturn is considered to be a disciplined and slow planet.

In such a situation, this nature will also be seen in the teams of IPL season 14 this year. Teams will perform in slow motion, but with consistency. This year’s IPL will be seen on more TV screens than the ground. This means that people will be better off going to the ground and watching the match rather than sitting at home and enjoying the match through live streaming or social media or on TV itself. Now let’s talk about which team can win the IPL season 14 title this year? So, according to my assessment, the chances of Team Chennai winning the tournament this year are quite strong. — Acharya Mragaank Sharma.

Next, let us go ahead and read Acharyaa Vinnie Arora’s IPL predictions.

She says, “This year too, IPL fever will be on the rocks. There will be enthusiasm in all the teams and each and every player will give their best. However, it is possible that this year the IPL could not get the necessary publicity which it has been getting every year. At present, where the Corona virus outbreak is spreading its wings, the IPL investors and promoters will need to try harder and more to make this game more popular in view of the prevailing circumstances.

Although, overall, the business of IPL will be good this year too, because even for the cricket lovers, the players of this tournament and the teams playing together will also be seen enjoying the IPL openly. Talk about winning, all the teams are going to win a lot, but according to my assessment, Team Punjab can win this season’s trophy this year.” – Acharyaa Vinnie Arora

Last, but not the least, let us go and read Acharyaa Kriti’s predictions.

“According to numerology, the sum of this year(2021) is five (2 + 0 + 2 + 1 = 5) and 5 is ruled by Mercury and number 3 will also hold an important significance due to the major transit of Jupiter this year. The teams which are in accordance with these numbers are Team Chennai – South Mangal, Team Delhi – North Mercury, Team Punjab – North West Moon, Team Mumbai – West Saturn, Team Rajasthan – North West Moon, Team Hyderabad – South Mars, Team Bangalore – South-East Venus, Team Kolkata-North-East Jupiter

In such a situation, according to my assessment, the victory of IPL this year can be attributed to Team Delhi because this team comes under the governance of Mercury and it is the time of year or simply Mercury. Apart from Delhi, the other team that is likely to win this year is Team Kolkata as this team is ruled by Jupiter and Jupiter will be in a strong position in the first half of the year. Apart from this, it is possible that the team can make its place in the Mumbai finals as it is ruled by Saturn and it is a planet that is compatible with Mercury. ” – Acharyaa Kriti

Furthermore, if you want to know more about IPL or your future, then you can go ahead and talk to Acharya Raman.

Disclaimer: We would like to add that the IPL Team names, logos, Marks and texts used are the sole property of IPL. These cricket information and predictions are provided for astrological, academic and research purposes only and don’t support any kind of illegal or immoral activities such as betting. Kindly do not carry out such activities and stay true to the law.