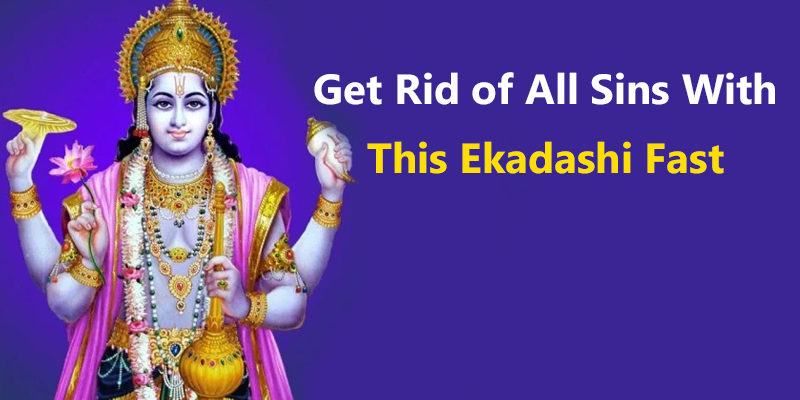 Papmochani Ekadashi fast opens the doors to salvation. Discover its Muhurat and other significances.

As the name suggests, Papmochani Ekadashi is the one which is supposed to wash off all of your sins.

There is a tradition of worshipping Lord Vishnu on this day. It is believed that one should not speak ill and lies on the day of Papmochani Ekadashi as it becomes difficult for the concerned native to acquire the prosperous results which flow in after observing the fast.

This Vrat is considered to be the most important for the liberation from the guilt of many sins including Brahmahatya(the amalgamation of seven types of sins from your previous birth), gold theft, drinking, violence, and foeticide. Each and every kind of sin gets washed off after the Papmochani Ekadashi fast and consequently, prosperity flows into one’s life.

In the current year, Papmochani Ekadashi will be celebrated on Wednesday, 07 April 2021 during Krishna Paksha. Apart from this, if we talk about the Shubh Muhurat for this event, then its Parna will begin at 13:39:14 and end at 16:10:59 on April 8. Hence, the duration will be 2 hours and 31 minutes.

Note: This Muhurat is valid for New Delhi only. Click Here to Find the Appropriate Muhurat for your City.

Each and every fast or festival has its own Puja Vidhi. Keeping this in mind, the necessary rites and rituals for Papmochani Ekadashi are mentioned below.

The Ekadashi which arrives during the Krishna Paksha of Chaitra month is known as Papmochani Ekadashi. This fast occupies a special place amongst all the fasts and festivals which finds a mention in the Hindu religion and culture, as it is capable of removing all kinds of sins and blemishes from one’s life. All kinds of sins of a human being get eradicated only by listening and reciting to the Vrat Katha of Papmochani Ekadashi.

As per a prevalent mythological legend, there used to be a beautiful garden name Chaitrath during the Puratan yoga. In this particular lawn, the son of Saint Chayvan, Medhavi used to sit for meditation. It was also seen that Devraj Indra, the king of Heaven used to relax here along with the nymphs and his fellow deities.

On one hand, Medhavi used to be an avid worshipper of Lord Shiva, while the nymphs followed Kamdev (the lord of passion and sensuality) with all their might. During a particular frame of time, Kamdev ordered a nymph named Manjughosha to break Medhavi’s concentration. Manjughosha, who possessed a great amount of beauty and dazzle ultimately succeeded in breaking the concentration of Medhavi with her beautiful songs, dances as well as beauty.

Saint Medhavi was taken aback and mesmerized because of her beauty. Very shortly, both of them decided to live together and hence they spent quite a few years together. One fine day when Manjughosha asked for Medhavi’s permission to go back to her world, he realized his mistake, that he had committed the grave crime of giving up on his ascetic life and austerity. This self-realization triggered his anger and he cursed Manjughosha to turn into a witch.

When Manjughosha heard about this, she fell on his knees and asked him for a way out of this curse. Medhavi was heartbroken after hearing Manjughosha’s plea and he asked her to observe the Papamochani Ekadashi and said that by keeping this fast all of her sins will be eradicated and she will turn into a nymph once again. But once he narrated all of this to his father Chyavan he said that you too have earned your fair share of sins and guilts, which is why now it will be necessary for you to observe the same Papmochani Ekadashi fast.

This is how both Manjughosha and Medhavi were granted redemption from their respective sins and curses by observing the fast of Papmochani Ekadashi.