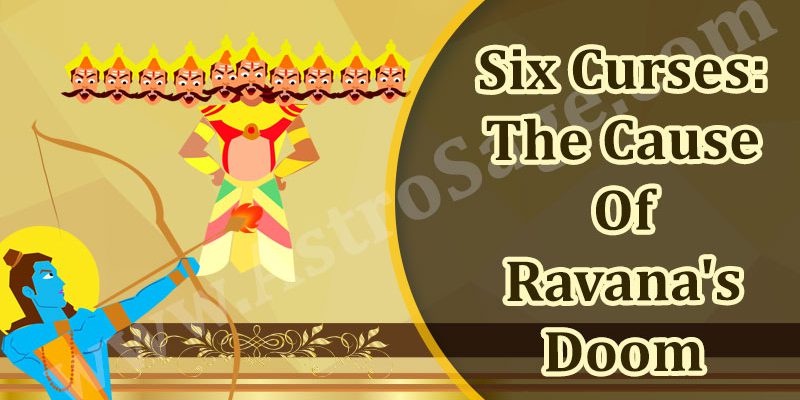 Dussehra is the commemoration of the victory of good over evil, and one of the significant Hindu festivals. This pious, religious celebration, is also known by the name Vijayadashami. It falls during the Aprahan Kaal on the Dashami (tenth day) of Shukla Paksha of Ashwin month. As most people know, mythology states that on this day, Lord Rama killed demon king Ravana as punishment for the abduction of Queen Sita, wife of Rama. However, not many know that Dashanana, a great scholar and an even more capable ruler, had six curses placed on him, that later became the cause of his end. We would often hear from our elders or through storybooks that Goddess Sita was the cause of Ravana’s death, but the truth is something else. Let us read on to find out what was the real reason behind the doom of one of the most learned men of his time.

The Curses Behind His Birth

Ravana and his brother Kumbhakarna were born as a result of a curse placed on the doorkeepers of Lord Vishnu, Jaya and Vijaya. When the Sanatha Kumara monks, who looked like young children because of their powers, came to Vaikunth to meet Lord Vishnu, the doorkeepers, in their arrogance declined them entry. Their insolence got them condemned to be born on Earth and expelled from the Lord’s abode. Lord Vishnu himself came outside to find out what the commotion was and made the doorkeepers understand the error of their ways. On realizing their mistake, Jaya and Vijaya started apologizing to the monks. The curse could not be removed. However, the monks told the doorkeepers that as Lord Vishnu himself came for their help today, thus he will come to Earth to send them back to Vaikunth.

Another story goes that once Narad Muni became too arrogant and claimed that he was the biggest devotee of Lord Vishnu. At this time, the Lord decided to test him and thereby eradicate his ego. Thus, while Narad was roaming in all lokas and praising himself, Lord Vishnu created a Maya Nagari (an illusionary city). When Narad came across this city, the King there gave him much respect and asked him to suggest an excellent husband for the princess. As Saint Narad explained the various incredible characteristics the girl’s husband will have, the thought entered his mind, that he was worthy of the princess. The only drawback was his looks.

Therefore, Narad went straight to Lord Vishnu and asked for the boon that he may look exactly like the Lord. However, instead of giving him a straight answer, the Lord said that he would cure Narad of his illness. Thinking that the Lord has given him what he wanted, he went to the Swayamvar ceremony of the princess, but she chose someone else. At that time a couple of Shiv Ganas came and not recognizing the Saint started making fun of Narad Muni, calling him a monkey. Saint Narad realized that Lord Vishnu has given him the face of a monkey instead and cursed the ganas for their misbehaviour. He told the ganas that they would take birth on Earth, expelled from Kailash, Lord Shiva’s abode, and will be beaten by monkeys.

Angry, the sage left the city to go back to Lord Vishnu and came across the newlyweds on his way. As the groom suddenly called out to him, Saint Narad recognized him to be Lord Vishnu. A livid Narad Muni cursed the Lord that “Just as I am roaming in the bereavement of a wife, so will you roam the Earth, bereft from yours.” At this, Lord Vishnu accepted the curse and showed the truth to Narad Muni, making him realize his mistake. Due to this curse, Goddess Sita, the avatar of Goddess Laksmi, consort to Lord Rama, the avatar of Lord Vishnu was taken from the latter in Treta Yuga.

Dashanana was the son of great sage Vishrava and his wife, the demon princess Kaikesi. As a result of the above curses, he was born with the Rajasik, Tamasik, and Bhakti (devotional) qualities. He was a prominent intellectual and had already become proficient in the four Vedas and six Shastras while still a child due to his sharp mind. Ravana was so adept that even today, the Ravana Samhita is considered best in Astrology. He performed many religious austerities to Lord Brahma, his great-grandfather and obtained many gifts from him. Afterwards, he carried out such severe tenacities for Lord Shiva, going as far as to cut off his heads to offer to Mahadev when he ran out of flowers. As a result, he became almost immortal due to his gifts from the Lords. Lord Brahma even endowed him with a little pool of Amrit (nectar of Immortality) in his navel.

Ravana was a great sage, a learned man, a Chakrawarthi king, a competent ruler, and so much more. However, one of the main reasons for his downfall was his ego and arrogance, due to which he was cursed multiple times. The curses that became the cause of his death are:

The first curse that started the downfall of Dashanana was from King Anaranya. Anaranya was a very mighty and majestic ruler, and the ancestor of Lord Rama. The story goes, when Ravana went on his spree to win the world, he fought a fierce war with King Anaranya and defeated the latter. As the King lay dying, he cursed Ravana that “one of my descendants will become the cause of your death.” As per Ramayana, Lord Rama took birth in the Raghu clan and killed Dashanana.

The second being to curse Ravana and pave his path to destruction was Nandi, the mount of Lord Shiva. Dashanana was one of the biggest devotees of Lord Shiva, and he went to visit the Lord on his abode at Kailash. The arrogant Ravana started making fun of Nandi’s bull form and called him monkey-face. A hurt Nandi cursed Dashanana that monkeys will destroy your entire clan. As we all know, Lord Hanuman and the unified army of monkeys destroyed Lankapati’s kingdom and most of his army.

The third person to curse Dashanana was the elder sister “Maya” of his wife, Mandodari. Maya was married to King Shambar of Vaijayantpur. Once Ravana visited Vaijayantpur and captured Maya in his trap. When King Shambar found this out, he arrested Lankapati. At this time, King Dasharath of Ayodhya also attacked Shambar, and in the ensuing war, the former won and the latter died. As a sorrowful Maya wished to die through Sati (the wife burns along with the husband on his pyre), the profligate Ravana asked her to return to Lanka with him. Livid, Maya cursed him that his death will come due to his impure thoughts for a pure, pious, and chaste married woman.

A tapaswini (a woman who performs tenacities) was the fourth person to curse Ravana leading to his doom. Once, the King of Lanka, Dhashanan went for a ride on his Pushpak Viman. On the way, he came across a beautiful lady. She was a tapaswini named Vedavati who was performing austerities to have Lord Vishnu as her husband. Lankapati started misbehaving with her, grabbed her hair and dragged her on the ground, forcing her to go to Lanka with him. Angry with this dishonour and breaking of her tenacity, Vedavati decided to leave her body. Before she died, she cursed Ravana that a woman will become the reason of his death.

Nalkuber, the son of his half-brother Kuber, was the next person to curse Ravana. The story goes that when Dashanana was out on his quest to win the three Lokas, he went to heaven or Swarg Loka. There, he saw a beautiful apsara named Rambha. The apsara tried telling him that she is bequeathed to Nalkuber, thus making her Lankapati’s daughter-in-law. However, overcome with his prurient thoughts for her, Ravana misbehaved with her. As soon as he got the news, a furious Nalkuber cursed Dashanana that anytime he touches a woman against her wishes, his head would burst into a hundred pieces. Due to this curse, Ravana was never able to come in contact with Sita despite his ill intentions, all the time she was with him in Lanka.

Dashanana’s sister Shurpanakha was the sixth person to curse him, the final straw. The beautiful Shurpanakha was married to Vidyutjihva, the Danava prince of the Kalakeya Danava clan. When Ravana was out to win the world, he had to fight against Vidyutjihva once, and the latter was killed in the war. Lankapati’s woeful sister cursed her brother that “I will become the reason for the downfall of you and your entire clan.”

Thus, even though Goddess Sita was a significant factor behind Ravana’s undoing, however, in actuality, these six curses paved the path to it.

We Hope That This Article On The Six Curses That Became The Cause Of Ravana’s Death Was An Interesting Read For You! Thank You For Being A Part Of AstroSage!