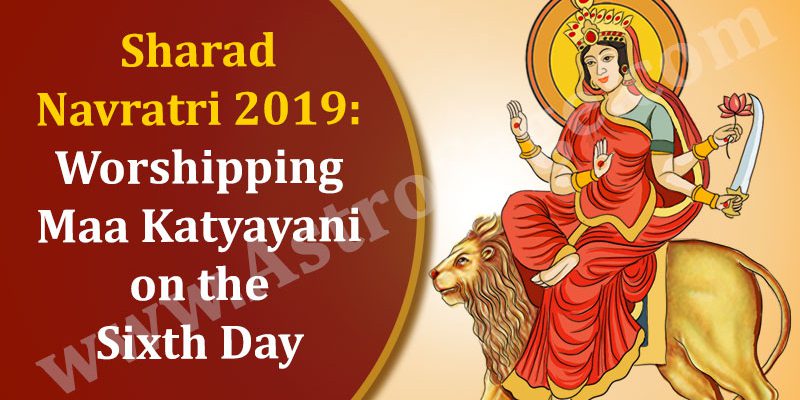 Maa Katyayani will be worshipped on the sixth day of Navratri! Know the description of the Goddess in this form, importance and the tradition of Bilva Nimantran during Durga Puja.

In the year 2019, the Navratri Sashti tithi falls on 4 October, Friday. A provision to worship Maa Katyayani on the sixth day of Navratri is followed from ages. Maa Katyayani is considered as the sixth form of Goddess Durga. According to mythological beliefs, Goddess Katyayani got her name due to her being the daughter of a sage. Talking about this incarnation of Goddess Durga, it is said that anyone who venerates the Goddess as per the rituals on the sixth day of Navratri attains happiness, prosperity and riddance from sorrows and illnesses.

Read in Detail: Glory of Maa Katyayani and Mythological Legend

Importance of Maa Katyayani in Astrology

Maa Katyayani holds high significance in both religion and astrology. Vedic Astrology states that the Goddess Katyayani represents the planet Jupiter. Therefore, devotees who worship the Goddess with a true devotion on the sixth day of Navratri get any dosha or malefic effect caused by Jupiter eliminated. Along with that, s/he attains her blessings and auspicious outcomes.

Maa Katyayani in her Form

Worshipping Maa Katyayani on this very day helps to gain spiritual and mental peace. For this, the devotees must carry out the Panchopchar Puja ritual so as to gain success on his/her efforts. The rituals to follow on the sixth day of Navratri are as follows:

Wear It During Navratri: Navdurga Kavach

Every year, Durga Puja is ritually commenced on the sixth day or Shashti of Navratri. It is believed that Maa Durga descended on the Earth on this very day. Hereby, as per its importance, the ritual of Bilva Nimantran Puja, Kalp Arambh, Akal Bodhan, Amantran and Adhivas is carried out.

The ceremony of Kaal Prarambh during Durga Puja holds high significance, as it is conducted early in the morning. In this, a pot or urn (Kalash) is filled with water and dedicated to the Goddess Durga as per the rituals and then established in front of her at the altar. This day is also known as Ghat Sthapana Diwas during Durga Puja, after which the devotees vow to carry out the rites and rituals and worship Maa Durga on the Maha Saptami, Maha Ashtami and Maha Navami.

Ritual of Bodhan During Durga Puja

The ritualistic custom of Bodhan also called as Akal Bodhan, is of great importance during Durga Puja. Bodhan means being awakened from sleep and is performed in the evening on the sixth day of Sharad Navratri.

During this ceremony, the devotees awaken the Mother Durga from sleep. As per the Hindu beliefs, all the deities remain asleep during the Dakshinayana period, and as this great festival of Durga Puja falls during that period, hence the Goddess is woken up from her “sleep”.

According to the beliefs, it is also said that Goddess Durga was first awakened by Lord Rama himself to slay the demon king Ravana with his reverence. In this case, since Lord Rama had untimely awakened Goddess Durga from her sleep, this act came to be known as Akal Bodhan.

During this ceremony, the devotees fill water in a Kalash or any other vessel on the sixth day of Sharad Navratri, and place it under the Bilva tree. In Hinduism, where Kalash Puja is associated with worshipping Lord Ganesha, the Bilva leaves are worshiped as one of the forms of Lord Shiva. Therefore, by placing the Kalash beneath the Bilva tree, the devotees awaken the Goddess from sleep and pray to her to seek her blessings.

It is only after completing this ceremony of Bodhan that the tradition of Adhivas and Amantran is observed. During this, devotees venerate Maa Durga while praying in front of her. After the Bilva Nimantran, the Goddess Durga is symbolically established at the altar, which is known as Devi Durga Ahwahan or Invoking Goddess Durga. This ritual is also known as Adhivas in some states.

Happy Navratri 2019 to all the readers from AstroSage! We hope that the blessings of Goddess Shakti Maa Katyayani remain on you forever.