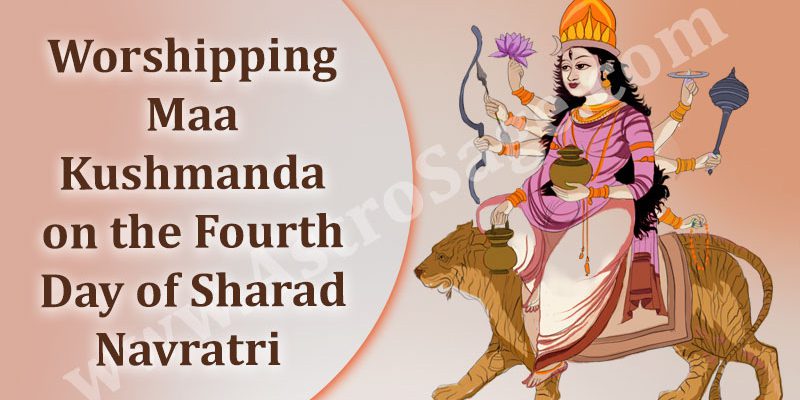 Today, i.e. on 2nd October, 2019, the fourth fast of Navratri will be observed. This day is dedicated to the Kushmanda form of Maa Durga and celebrated with great pomp and show across the country. On the fourth day of Navratri, there is a provision to worship Maa Kushmanda. This name of Maa Kushmanda is a combination of three words, in which ‘Ku’ means Miniature, “Ushma” means energy and “Anda” means Oval. According to the Hindu beliefs, Goddess Durga created the universe in her own oval, elliptical form, and hence earned the name Kushmanda Devi.

Importance of Maa Kushmanda in Astrology

According to Vedic astrology, Maa Kushmanda offers guidance to the father of the Universe i.e. Sun. hence, it is also believed that anyone who worships Maa Kushmanda by fasting on the fourth day of Navratri not only attains her blessings but gets rid of all doshas and afflictions caused by the Sun from his/her kundli.

Maa Kushmanda In Her Form

Worshipping Goddess Shakti in the form of Maa Kushmanda helps the native attain wealth, happiness and peace in life. The puja rituals for the fourth day of Navratri are as follows:

Wear It During Navratri: Navdurga Kavach

Happy Navratri 2019 to all the readers from AstroSage! We hope that the blessings of Goddess Shakti Maa Kushmanda remain on you forever.