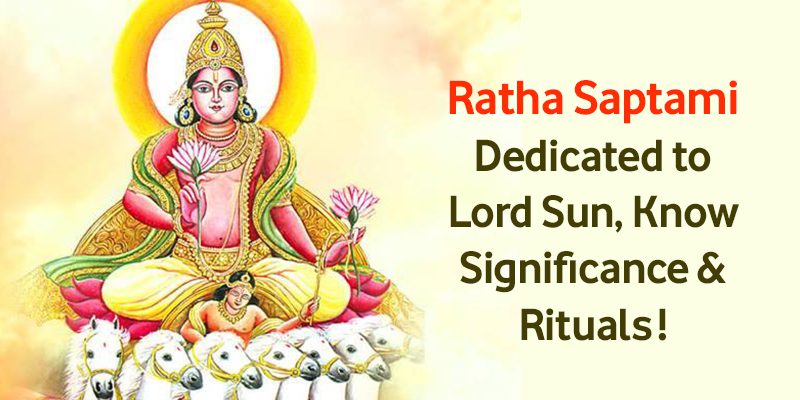 Ratha Saptami or Magha Saptami is dedicated to the Lord Sun. The seventh day of the Magha month is celebrated as Ratha Saptami because mythology claims that Lord Sun began using his chariot of seven horses on this day. With the beginning of the Magha Saptami, the Sun God mounts his regal chariot and begins his movement across the sky for the entire year. This year, this auspicious day will fall on 1 February 2020, Saturday.

Ratha Saptami is celebrated amongst the essential religious festivals. The day is commemorated throughout the country with much fun and frolic. Apart from Magha Saptami, the day is also known by the names Magha Jayanti or Surya Jayanti. On this very day, Lord Sun began the enlightenment of the Universe, and this tithi is also considered to be the birthday of Surya Deva.

As per the Hindu Panchang, this festival falls on the seventh day (Saptami tithi) of the Shukla Paksha (bright fortnight) of the Magha month, and as per the Gregorian calendar, it falls anywhere between mid-January to mid-February. Generally, the rituals for Ratha Saptami are performed two days after Basant Panchami.

On this auspicious occasion of Surya Jayanti, let us pray to Lord Sun that he continues illuminating the world with his warmth and splendour like he began doing on this day.

Natives believe that Magha Saptami marks the arrival of Summer, and hints towards changes in the climatic conditions of South India. Simultaneously, this is also a promising day for farmers to begin farming.

Charity and donations are considered especially favourable on Ratha Saptami. It is believed that doing charity on the eve of Surya Jayanti abolishes the sins and diseases of the devotees, and Lord Sun blesses them with longevity, prosperity, and good health. Taking a bath before sunrise is also considered a healthy tradition. People believe that bathing in holy rivers on this day delivers one from all diseases of the body, especially skin-related problems. Due to this belief, Ratha Saptami is also known by the name ‘Arogya Saptami’ meaning disease-free. On the other hand, this day is celebrated as Achal Saptami amongst saints.

The Best Guidance For Your Professional Or Business Life: CogniAstro Report

How is Ratha Saptami Celebrated?

Grand ceremonies and special rituals in temples and holy places of Lord Sun are a significant part of the celebration of Ratha Saptami. Magnificent celebrations are held on the day at Tirumala Tirupati Balaji Temple, Sri Manguz Temple, Mallikarjuna Temple, and shrines and temples in various regions of Andhra Pradesh, Karnataka, Tamil Nadu and Maharashtra.

It is believed that worshipping Lord Sun on the eve of Ratha Saptami delivers the devotees from their past and present sins, and they take one step towards Moksha. In addition to these, the Sun God also blesses people with longevity and good health.

Do You Have Raj Yoga In Your Kundali? Get Your Raj Yoga Report

We Hope You Have A Prosperous Ratha Saptami! Thank You For Being A Part Of AstroSage!