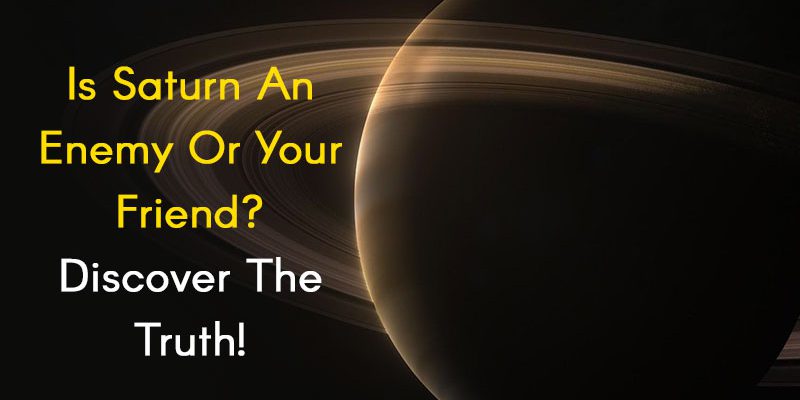 The very mention of Shani Dev makes us tremble with fear, but why is it so? Is Saturn really an enemy or a friend? There are many such questions related to Shani Dev, which many people are not even aware of even today, due to which there is a needless fear of Shani Dev in the minds of people. So let’s try to know today, how much is the fear of Shani Dev justified? To understand the detailed impact of Shani Dev or Saturn in our lives along with other planets in your life, you can order the AstroSage Brihat Horoscope right away.

Every time we hear the name of Lord Saturn, people often get anxious and nervous, because they believe that Shani Deva is an innately angry God who only punishes and curses the natives. So, is Shani Dev really a friend or an enemy.  Worry not as AstroSage is here with answers to these questions and more.

Who Exactly Is Lord Saturn?

Let us first begin the entire discussion with who Lord Saturn is? Sun is considered to be the Ruler of the nine planets (navagraha). The wife of Surya Deva is Sangya, and their children were Yama and Yami. However, Lady Sangya could not bear the lustre of the Sun, and therefore, she decided to perform austerity.

To ensure that Surya Deva does not notice her absence, she left her shadow, Chhaya to take care of the Sun, and their child was Lord Saturn. Thus, Shani Deva is the son of Lord Sun and Lady Chhaya and is often also known by the name of Chhaya-Putra (son of Chhaya or shadow).

The Relationship Between Sun and Saturn

As per Vedic Astrology, there is hostility between the planets Sun and Saturn. On the one hand is the Sun – the Lord of light and strongest during the day. On the other hand, is Saturn – the one who can see in the dark and is strongest at night. The story goes that when Chhaya-Putra Lord Saturn was born, his complexion was dark, due to which the fair coloured Sun refused to accept that Shani Deva was his son.

At this, the young Saturn, in his anger, eclipsed his father. As a result, there are often stressful undercurrents to the relationship between the two. However, the two are father and son, and where the Sun is the soul of the universe, Saturn is the Judge. They both play vital roles in the life of a human being.

From a religious perspective, Lord Saturn is the son of Surya Deva and Chhaya, as well as the favourite student of Lord Shiva. Mahadev is the one who made Shani Deva a judge and the punisher.

From an astrological perspective, Saturn is the Lord of the tenth and eleventh sign of the zodiac, namely, Capricorn and Aquarius. It remains exalted in the zodiac sign Libra and debilitated in the zodiac sign, Aries. Aquarius is its Mooltrikona sign. It represents the air element primarily and is also the significator of chilly winds.

If the planet Shani is unfavourably placed in one’s kundli, then it can cause diseases like cancer, paralysis, cold, asthma, fracture, and arthritis or rheumatism, as well as situations like accidents or jail. Shani Report by AstroSage sheds light on such factors and reveals the influence of planet Saturn on your life and its various aspects.

On the flip side, if the planet is favourably placed and debilitated, then it offers you positive results and makes you diligent. You are just, righteous, and impartial, as well as hardworking, which brings you success in your professional life. Although the promotion of such natives is usually delayed, it is assured. There is a stability to your living, and Lord Saturn inspires you to live your life to the fullest.

The Saturn Transit is an essential event because this planet spends the longest time in any zodiac sign. It remains posited for about two and a half years in each sign, which is why the transit period of Saturn is called Dhaiyya (Dhai = 2.5). The Saturn transit is the incident which creates the beginning, middle, and end of the infamous Shani Sade Sati. This is because of the influence of Saturn on a sign that persists for seven and a half years.

While Saturn is posited in one zodiac sign, and while it is in the signs before and after it. The two and a half year each for the three stages (before the sign, in the sign, and after the sign) constitutes the entire seven and a half years of the Sade Sati. Simultaneously, when Shani Deva is placed in the fourth or eighth house of a native’s birth chart, then it is said to be Saturn’s Panauti and Kantak Shani, respectively. AstroSage’s Shani Report reveals the influence of such transitory movements of Shani on your life, formation of favourable and unfavourable yogas in kundli and respective outcomes.

Saturn is the significator of democracy and represents the people. No matter how prominent the king or prime minister is, their fourth or tenth houses, Saturn’s effect on these is always taken into account while reading their kundli. These are majorly responsible for their importance in the eyes of the nation. Apart from that, since he is the Judge of the Universe, Saturn has particular authority over the judiciary system of any place.

Install Shani Yantra and curb the malefic effects of Shani

In the present time, although people are tied up with their Karma, they often knowingly-unknowingly end up doing some misdeed. This wrongdoing then ends up becoming a problem for them as Lord Saturn gives them the relevant results of their deeds during its major period, period, Sade Sati, or Dhaiya. As a result, people are often scared and think that Lord Saturn is only cursing them. Whereas the truth is that Shani Deva is an impartial judge who only offers you results according to your Karma, and directs you towards the right path.

Lord Saturn is a teacher who takes a strict exam and makes you a great personality. He refines you and after making you burn through the adversities of life, makes you a diamond from a piece of coal. Due to the contradiction in the natures of the Moon and Saturn, we take into account the transit of the latter from one’s Moon Sign. Saturn, in such a situation, creates such conditions mentally, due to which the native feels as if difficulties are surrounding them.

Wear Saat Mukhi Rudraksha and Get Blessed From Lord Shani

However, they need to realize that he is not the enemy here. Instead, Lord Saturn is your true friend, who genuinely wishes well for you. He always wants you to become a prominent figure. Saturn creates such situations in front of you so that you understand the moral values of life, and your character develops so that you can progress in life. On the whole, he wants you to follow the right track and puts obstacles in your current path to steer you on to the correct one. Following effective Shani remedies offered by Shani Report can help you overcome such obstacles and appease Lord Shani with your devotion.

Remedies To Receive The Blessings Of Lord Saturn

If you want Lord Saturn to be promising to you, and wish to receive positive outcomes from him during this ongoing worldwide pandemic, then you can perform the exclusive remedies given below:

We Hope That This Blog Will Help You Escape The Baseless Fear Of Lord Saturn! Thank You For Being A Part Of AstroSage! Stay Safe & Healthy!