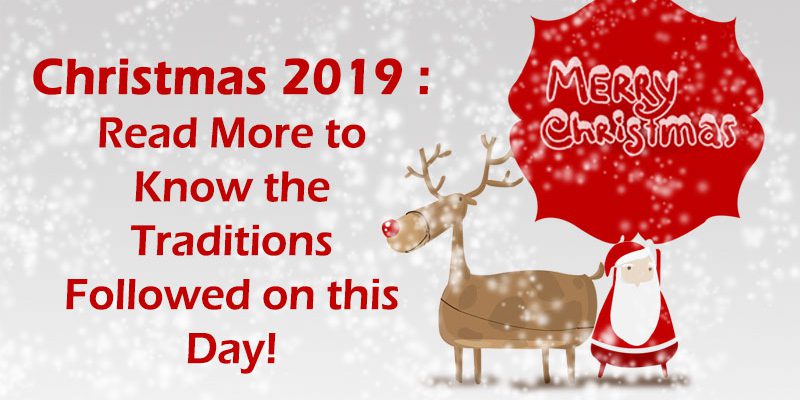 This Christmas, know how to obtain blessings from the Lord so as to make your festive season more merrier.

Undoubtedly, Christmas is the most pious day for the followers of Christinaity. People all over the world celebrate this day with great joy and fervour. The celebratory status of Lord Jesus Christ is not unknown to any of us. He is often regarded as the saviour of mankind. Over the years it has been proved that he was the true owner of this title. The festival Christmas marks his birth anniversary, which is why it is celebrated with such vigour in the entire world.  In the modern era, where the dynamics of culture and religion is changing, natives belonging to the other communities and religions have also been seen getting engaged in the festivities of Christmas. For many, it is a joyous day which inaugurates the festive season, as the New Year arrives six days after the Xmas celebrations are over. Nevertheless, people meet and greet their near and dear ones on this day and enjoy a hearty meal together. Christmas Trees are decorated extravagantly and carols are sung by natives on this day. The younger lot also eagerly wait for Santa and his gifts, which adds more delight to the celebratory day. Let us now have a look at the various aspects associated with this festival  which hallmarks the arrival of the season of joy!

Christmas Day in the Pages of History

As it is known by all, the birth anniversary of Jesus Christ is celebrated as Christmas Day by the followers of Christianity. Lord Jesus happened to be one of the most important spiritual leaders of Christianity, whose teachings have left a great impact on the people of his time. Even in the current time too, his preachings are very religiously followed by Christian religion and culture. It is believed that more than 2000 years ago, Jesus Christ was conceived by mother Mary, through the holy spirit. At the time of delivery, Mary along with her husband was unable to find any inn as they were travelling. As a result, she gave birth to a baby boy in a stable, who later came to be known as Jesus Christ. First and foremost, the news of Jesus’ birth reached the shepherd community who belonged to the lower strata of the society. This indicated that Lord Jesus was born as the savior of mankind to help those who are poor and needy.

However, the date of his birth was much debated upon until the time when the Bishop of Rome, Pope Leo I merged the birthday of Jesus Christ with the Roman festival Saturnalia, a day on which the Sun God was venerated by the Roman folks. The idea behind this was to stop the Romans from worshipping the Sun God, which is why Pope Leo I described Jesus Christ as a ‘new ray of light’. Hence, his birth anniversary is celebrated with great fervour all over the world as Christmas. Even before the celebrations of Christmas took place, the winter solstice took place during this time of the December month. In most of the European countries, this happened to be the time when they would leave behind the toughest days of the winter season. They would take part in drinking and feasting socially and spend the winter nights together. The arrival of a festival added a feather to the cap and made their celebrations even more joyous.

Get The Most Detailed Kundali Report Ever: Buy Brihat Horoscope Report

To keep the spirit of Christmas alive, people take part in many activities and traditions which we will talk about in the next section of this blog. Let us now focus on the two primary customs which are never forgotten by the natives, no matter in which part of the world they live in.

It is believed that this tradition of bringing Christmas Trees to one’s home and decorating it during the festival of Christmas originated in Germany. Many people used to hang tree branches and twigs outside their homes to ward off evil energies and forces. Natives then thought of ushering in some decorated trees to their interiors. Some even state that the first ever Christmas Tree came into existence in the year 1419. Ever since then people have been bringing and welcoming Christmas Trees to their homes which are considered a symbol of fertility.

The myth associated with Saint Nicholas gave birth to the legend of Santa Claus. Beliefs state that Nicholas was a bishop in a small town named Myra, located in modern Turkey. He is said to be the one who helped young spinsters to cross paths with their dream husbands. In a secretive manner, he used to drop bags full of money at their doorsteps so that their parents did not find any difficulty to pay dowry to their respective husbands. People have not forgotten this gesture of Saint Nicholas, which is why they exchange gifts on the day of his birth anniversary. It is also believed that the mythological figure, Santa Claus was also a modified version of Saint Nicholas who provide gifts to children on the day of Christmas.

Get Predictions based on your Birth Chart

Apart from the ones mentioned above, there are also some other traditions which are also not forgotten by natives on the day of Christmas.

We hope that you like this article of ours on Christmas 2019. Wish you a very merry Christmas. Thankyou for staying connected with us!!