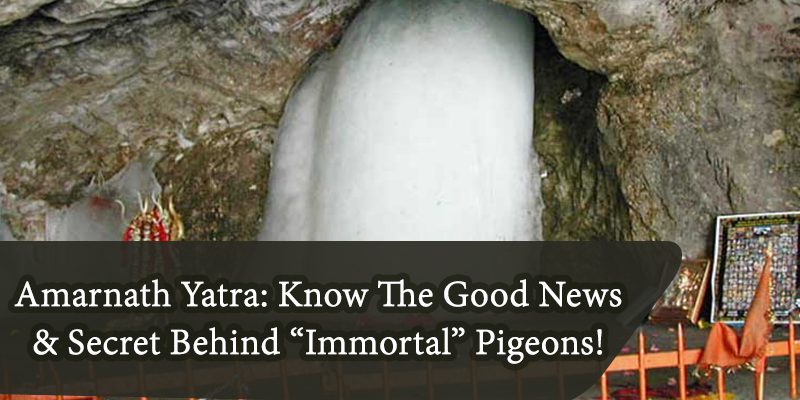 Great news for the devotees who are visiting the biggest Hindu pilgrimage site Amarnath is out! This year, the Amarnath Yatra will begin on Tuesday, 23 June and conclude on 3 August. Just like last year, this yatra will be concluded on the day of Shravan Purnima (Raksha Bandhan). The registration for Amarnath Yatra will start from April 01.

As compared to 2019, the Yatra will be accomplished in 42 days this year, hereby indicating a reduction of four days while keeping in mind the safety of devotees. To be a part of this journey, people first need to get themselves registered, medically examined and follow a lot of other steps. So let’s move on and get you updated on how to register to be a part of Amarnath Yatra, things required for it and the secret behind the pair of pigeons that is always sighted at Amarnath Cave.

Things To Keep In Mind While Travelling To Amarnath

Devotees preparing to go on Amarnath Yatra have to show their health certificate. Also, pilgrims with a deep desire to visit the holy place have to seek medical advice before traveling. This year, people below the age of 13 and above 75 years of age will not be allowed to travel since the route to Amarnath is way too difficult and the weather remains extremely cold. These are some of the things devotees should keep in mind while preparing to go on a pilgrimage to Amarnath.

It is important for the devotees to remain physically fit to endure a harsh climate and path. Eating well and exercising well can benefit you tremendously in this case. Avoid any activities that harm the environment during the journey. Avoid wearing slippers and take trekking shoes with you. Do not take any shortcut, as it can be dangerous.

Settled in the lap of Himalayas, Amarnath is said to be the most pious shine. It is believed that this is the place where Lord Shiva preached about immortality to Goddess Parvati. Considered one of the main shrines of Lord Shiva, Amarnath is situated at an altitude of 13 thousand feet above sea level. The prominent feature of this place is the natural Shivling made of ice in the cave, which is known as Swayambhu Himani Shivling and Baba Barfani.

One of the most special facts about this Himling is that just like the visibility or size of the Moon, the shape of the ice keeps on changing. One can witness its full shape and size on the day of Shravan Purnima, whereas it gradually gets smaller by the day of Amavasya. Every year, lakhs of devotees visit this pilgrimage to witness the Holy Him Linga.

Secret of A Pair Of Pigeons At Amarnath Cave

It is widely stated that devotees witness a pair of pigeons moving around at the Holy Shrine even to this day. This sighting came as a surprise since the harsh weather and icy-cold environment make it nearly impossible for these birds to survive. There is a mythological story associated with it.

It is believed that when Maa Parvati asked Lord Shiva the reason behind his immortality, Lord Shankar decided to reveal the secret by narrating the Amar Katha in detail. He found Amarnath Cave to be the perfect place since he wanted no living being to listen to his secret. In a hurry:

After he entered the Holy Amarnath Gufa with Maa Parvati, he took the Samadhi and created Kalagni to ensure no other living creature is around. When he was reciting the secret of immortality, a pair of pigeons overheard the narrative, thus becoming immortal.

We hope that the devotees visiting Amarnath to witness the grandeur of Baba Barfani in 2020 travel safely and attain His blessings.