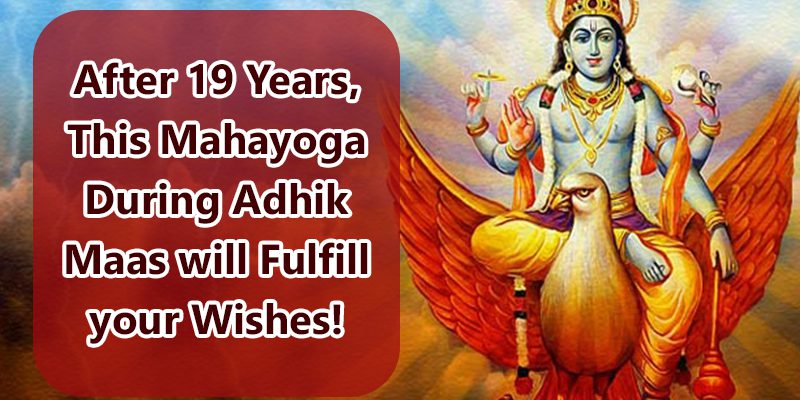 According to the Indian system of astrology, a lunar month increases in the Panchang(s) so as to strike the right amount of balance between Solar and Lunar years. Usually, the phenomenon of Sankranti or the event of Sun changing zodiac signs, taking place every month, helps the lunar months to keep running smoothly. When two Sankrantis or Sun transits take place during a period of one month, then a ‘Kshay’ month arrives and the month during which any Sankranti doesn’t occur comes to be known as ‘Adhik Maas‘.

Now, after a period of 19 long years, this Yoga of Adhik Maas is beginning on Friday, 18 September, 2020 with the Uttara Phalguni Nakshatra and it is quite an auspicious Yoga in itself. Such a Yoga is believed to bring in prosperity, happiness and provides instant results in our endeavours.

Adhik Maas : When and How?

As it has been mentioned above, a lunar month increases in the Panchang(s) after every three years, so as to strike the right amount of balance between Solar and Lunar years. This is also known as Adhimas or Malmas.

A typical solar year consists of 365 days, 15 Ghadi, 22 Pal and 57 Vipal. While the lunar year is of 354 days, 22 Ghadi, 1 Pal and 23 Vipal. In this manner, there is a difference of 10 days, 53 Ghadi, 21 Pal (i.e. about 11 days) every year in both the years. To strike the right balance with these differences, a lunar year comes with 13 months instead of 12 months. In fact, this situation arises on its own, because the lunar month during which a Sankranti or Sun’s transit does not occur, comes to be known as ‘Adhik Maas’.

It is believed that donations made during Adhik Maas along chanting and meditation yield ten times more results than worshipping the Lords on regular days. This is the reason why people start appeasing the Lords by performing all types of Pujas and worship they can with a devoted heart and mind.

Now, the question which arises in our mind is that if this month is so pious and holy, then why does it arrive only after every three years? Why is it hailed as such a holy month? Why is this one month called by three distinct names? Many such questions keep hitting our minds. So, with this blog today, let  us take a look at all the things which should be known about the Adhik Maas.

In this way, with the efforts made during Adhik Maas, a person can cleanse himself/herself from all the sins and imbibe a new sense of energy after every three years. According to Astrology it is stated that taking part in religious and spiritual activities -Yoga, meditation during this period can help a person to get rid of all the negative Doshas that are present in his or her Kundli. All the ups and downs which are prevalent in life come to an end gradually and one can move towards leading a happy and peaceful life.

Things to Avoid During Adhik Maas

In the domain of Hinduism, it is considered inauspicious to perform any holy activities during the period of Adhik Maas. It is believed that because of being an add on month(Adhik), it is polluted in nature. So auspicious ceremonies which are an inherent part of Hindu religion and culture like Namkaran, Grihapravesh, Yagyopavit along with the purchase of valuable items are avoided during this month. This month has been named Mal-Maas because of being impure in nature.

However, there are certain specific days which are considered auspicious to buy and purchase things during this year’s Adhik Maas. In between this period of more than 25 days, you can buy items like clothes, jewelry, property, vehicles etc. Let us now know about those auspicious Yogas during which things can be purchased.

Sarvarthasiddhi Yoga: This Yoga is said to be the best for attaining success in all kinds of work and for the fulfillment of each and every desire.

Dwipushkar Yoga: In the world of astrology, Dwipushkar Yoga is considered to be very special. It is believed that any work done in this Yoga yields double of its results.

Apart from this, readers can also check out the list given below to buy things in accordance with auspicious days.

Worship Goddess Lakshmi along with Lord Vishnu During Adhik Maas

Usually, the followers of Hindu religion and culture spend the days of Adhik Maas by devoting themselves completely to fasts, Puja-Paath, meditation, Bhajan, Kirtan etc. as per the laws laid down by scriptures, apart from Yajnas or Hawans, the recitation, chanting and reading of Shrimad Devi Bhagwat, Sri Bhagavata Purana, Shri Vishnu Purana, Bhavishyottara Purana turns out to be greatly beneficial. The primary deity associated with Adhik Maas is Lord Vishnu, which is why it would also be beneficial if natives keep reciting the Mantras associated with Lord Vishnu all throughout this while.

It is believed that Lord Vishnu himself blesses the devotees who keep chanting the Vishnu Mantra during the period of Adhik Maas and not only frees the native’s life from all sins, but also fulfills all kinds of wishes of the devotee. But readers should also keep in mind that along with venerating Lord Vishnu, worshiping Goddess Lakshmi will also yield blessings and fruitful results, because on the full Moon which falls during the Ashwin month, Goddess Lakshmi descended upon this Earth. This full Moon is known as Sharad Purnima, which is why people do not forget to worship Goddess Lakshmi on this day.

So, in this manner, worshiping Goddess Lakshmi along Lord Vishnu during this month ensures the attainment of wealth, happiness and prosperity in this Maha Yoga, and natives will definitely be blessed with unbeatable glory and invincibility.