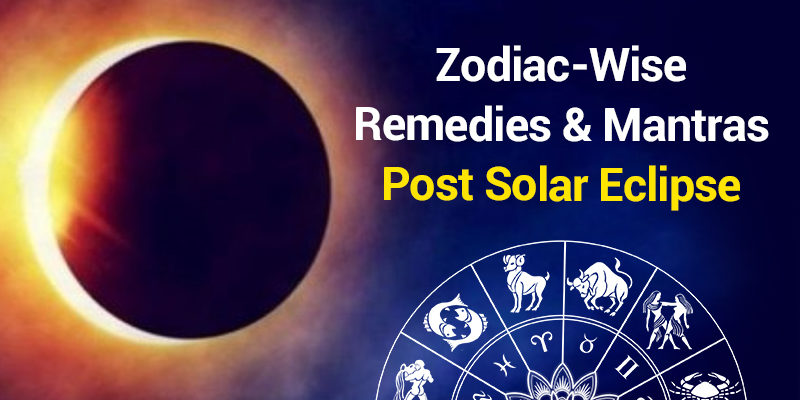 Things to be done after Solar Eclipse

We have already made you understand Solar Eclipse’s impact on different zodiac signs through our previous blogs. The thing to be kept in mind is that Solar Eclipse may not have immediate effects but its impact can be observed within the span of six months, and therefore, it becomes extremely important to know certain remedies which can be performed immediately after Solar Eclipse to save ourselves from the ill effects of Solar Eclipse and march ahead toward progress.

The Sun is just like a soul in our body and therefore, the occurrence of Solar Eclipse is inauspicious for us. There is a need to enhance positive energy to protect ourselves from the malicious effects of Solar Eclipse because the entire atmosphere gets polluted which indirectly starts affecting us.

Although the Sun is the ruling lord of Leo, its impact is felt by the natives of all other zodiac signs. Now, let’s know some special zodiac-wise remedies to get rid of the bad effects of Solar Eclipse.

Special Remedies To Ward Away The Ill Effects Of Solar Eclipse

Taking a bath, giving donations, and performing meditation hold immeasurable significance during the eclipse. In this very context, we are suggesting some simple zodiac-wise remedies and Mantras to eliminate the malefic effects of Solar Eclipse.

Over and above, donating things associated with Surya Dev and reciting Surya Mantra will prove to be highly beneficial. If the Sun is stationed in a debilitated position in your horoscope, then make arrangements for Surya Shanti Puja by a learned Brahmin. On the other hand, if the Sun is positioned in an exalted state in your horoscope, you should recite Surya Gayatri Mantra on the evening of Solar Eclipse day.

We hope you may be successful in evading the ill effects of Solar Eclipse by performing the above-mentioned remedies and can achieve splendid success. You will also get rid of health-related ailments and earn due respect.