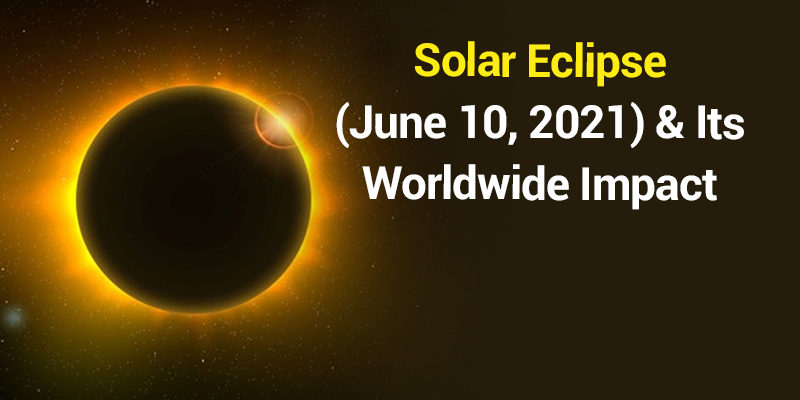 Solar Eclipse is a geographical event and is a matter of curiosity for all human beings. Although everyone is eager to have a glimpse of the Solar Eclipse, it is not advisable from a religious point of view. Those who try to look at the Solar Eclipse with naked eyes are likely to lose their eyesight so, they are advised to avoid this. In this blog, we are going to give you the details regarding Solar Eclipse occurring on June 10, 2021.

Annular Solar Eclipse: When & Where?

As we have already explained above that this eclipse will not be visible in India. Since it is a ring-shaped Solar Eclipse, it will occur from 1.42 PM and last till 6.41 PM on Amavasya Tithi in Jyeshtha month during Vikram Samvat 2078 under Mrigashira Nakshatra. This Eclipse will take shape in the Taurus zodiac sign. However, it will be seen in Canada, Finland, Ireland, Iceland, Russia, Morocco, Austria, Denmark, China, France, Greenland, Germany, Norway, Netherlands, Poland, Romania, Spain, Switzerland, Portugal, Sweden, England, America, Ukraine, Uzbekistan, etc.

Solar Eclipse Along With Special Occasions

Solar Eclipse occurring on June 10, 2021, is falling in special conjunction. On this day, there will be an occasion of Shani Amavasya, which marks the birth of the son of Lord Sun. Along with this, Vat Savitri Vrat is to be observed on this very day. This Vrat is basically observed by married women with due rituals and absolute devotion for the long life of their husbands. Performing worship is strictly prohibited during the Eclipse, but it is not occurring in India and hence, its Sutak Kaal will not be taken into consideration and worship can be carried out with due rituals. Especially, the worship of Shani Dev along with Surya Dev will be highly fruitful on this very day.

Solar Eclipse as per Astrology

The Sun is the benefactor of soul and health and therefore, the diminishing effect of Lord Sun is in no way healthy. Especially, at present, an epidemic like Corona has affected the world badly, and in such a scenario, the sinking power of the Sun and the presence of Saturn in Samsaptak Yoga can flare up the disease once again. Those countries that fall under the Taurus zodiac sign need to be extremely cautious.

In Vedic Astrology, due importance is always given to Solar Eclipse, but it is also said that where it is not visible the effect is also not felt. Since it is not going to be visible in India, so there won’t be any direct impact but wherever in other parts of the world it is visible, its effect would be clearly seen and this includes the neighboring country i.e. China. Even America, the most powerful country in the world, can not escape from its impact. So, indirectly, India would also experience its impact.

Now, we can clearly say that the impact of the Solar Eclipse will be experienced by most of the countries of the world. Due to this, on one hand, there can be a war-like situation in some counties, while on the other, the epidemic can also stretch its feet. In view of this, we should be ready to safeguard ourselves from such a situation.

Taurus, which is ruled by Venus, is the zodiac sign of the earth element. In such a situation, problems of earth and water may intensify and there are chances of tremors and Tsunami. During the eclipse, Saturn and Mars will be in the opposite position and this will flare up tensions between the nations which may take the shape of a cold war.

This Eclipse may escalate the tensions among America, China, and other countries. However, China will have to face its ill effect leading to health problems among its citizens and its economy will be jeopardized. It has to work hard to set its fiscal house in order.

China may try to incite India to cover up its failure and escalate tension at the border. It may have the support of friendly countries but Russia will stay aloof in spite of being its friend.

To appreciate the sovereignty and independence of India, some countries would support India, and thus, its image will enhance. This time will bring some special changes in the communication sector.

This eclipse will also impact the communication sector and there will be a strong race among countries to launch a satellite but some will face failure in the mission. Share market will also be badly affected and the prices of wheat and other agricultural items will also shoot up.

The countries where the eclipse would be visible, have to face economic, strategic, and geographical challenges. The economy which is under pressure due to Corona Pandemic may shatter further. The economic crisis at the world level will also affect the Indian economy and thus, the prices of essential commodities may go up.

The Sun is the soul and breath for human beings and therefore, the natives of all zodiac signs should chant Mantras and perform special worship.

These predictions are based on your moon sign. For a more personalized prediction, connect live with an Astrologer on call or chat

During the eclipse, recite the Surya Dev Mantra – ॐ अचिंताय नम:। / oṃ aciṃtāya nama:। as many times as possible and after the eclipse, wear orange coloured clothes.

Chant the Mantra – ॐ वसुप्रदाय नम:।/ oṃ vasupradāya nama:। to attain the grace of Lord Sun. Along with this, the Mantra of Lord Shiva should also be recited.

Chant the Mantra –  ॐ आदित्याय नम:।/oṃ ādityāya nama:। to please Lord Sun and wear a pendant of Lord Sun made of copper.

Avoid Donating These Items On Saturday