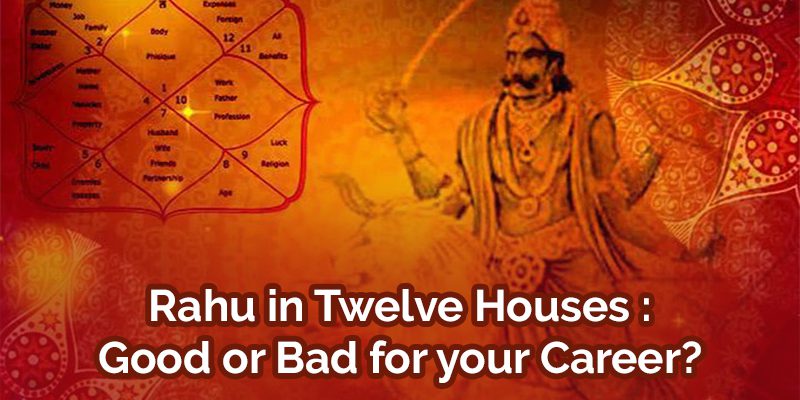 The conventions of astrology state that Rahu is neither a planet nor a heavenly body. Also, according to astrology, Rahu and Ketu signify two points of intersection of the orbiting paths of the Sun and Moon, which lie opposite to each other (at 180 degrees or degrees) relative to the Earth.Both of these planets are considered to be shadow planets(Chaya Grah) as any entity that has the capacity to influence human life are regarded as planets. One of the many aspects that they influence in a human being’s life is his/her professional life, which is the most important area of one’s life. If you wish to know some specific and personal details about your career, then you can get a copy of AstroSage’s CogniAstro Report for Professionals.

These two are only intersection points and hence are called shadow planets. Both of them transit through zodiac signs at opposite speeds, at a difference of 6 degrees i.e. 180 degrees, which is not the case with other planets. It takes 18 months to move through one zodiac and about 18 years complete transiting the entire zodiac belt.

Rahu is a miraculous planet and its influence can either make a person hallucinate or earn a sufficient amount of knowledge. While being posited in various houses of one’s Kundli, it can impact your career and professional life in various ways. Through this blog today, we will aim to explain how it propagates various kinds of professional results, while remaining seated in all the 12 houses of one’s Kundli or horoscope.

Let us take a look at the results now!!

When Rahu remains placed in the first house, a native becomes efficiently skilled in making transactions, fulfills his/her desires and ambitions with the influence of others, is determined but under-disposed, under-performing, pain-tolerant. Such a native also earns his livelihood by working with female partners and also betting.

When Rahu remains placed in the second house of a native’s Kundli, then such a person tends to stay away from his/her family members and becomes inflicted with various kinds of misery. He or she also lies occasionally, is arrogant, safeguards his or her wealth religiously, earns money in foreign countries, loves travelling, is a bit unkind in nature but also takes interest in relics, royal and under wealthy at the same time. But many times, Rahu in this house provides the native with an unprecedented amount of wealth.

Rahu in third house governed natives are supremely powerful, makes money with the help of muscle power, highly influential, generally attains an expatriate status, has great physical strength, has royal ties, earns wealth via enemies, is a good businessman, a spiritual person and also the one who can make the most out of his/her fortunes. Because of this, the person tends to be skilled, leads a luxurious life, is a scholar and witnesses the inflow of prosperity in his/her life.

When Rahu remains posited in the fourth house of one’s Kundli, then such a person earns money by travelling, usually settles abroad, is devoid of the company of friends, gets associated with lowly people, earns money through debating and also faces the dearth of a son and relatives. The person also tends to lead a happy life by getting involved in jewellery related business deals and remains at the peak of success in between the 36th and 53rd year of his or her life.

Rahu in the fifth house provides an increment to the fortune of a particular native. He or she tends to understand the Shastras or the scriptures really well but ends up serving in a low paying job. The person is usually seen performing his or her work with great diligence, taking interest in consuming more and more knowledge, and is inclined towards religious stuff and activities. The concerned person also makes the mistake of wasting the hard earned wealth of his/her family. Rahu in fifth house induced natives tends to keep switching their jobs on a regular basis. Such people have great interest in academics. If you or your child is facing problems in selecting the right course after class 10th, then it is recommended to get a copy of the CogniAstro report.

When Rahu is present in the sixth house of a person’s Kundli, then such a person can turn out to be mighty, powerful, scholarly, lead a happy and long life, but can also be an unsuccessful conqueror of his/her respective renemy or get associated with animal husbandry. Such a person often gets his/her work done with the company of lowly people, achieves great things, beholds the reputation like that of a king, is an enemy slayer and enjoys many kinds of leisures and comforts. The concerned person can earn his livelihood from all these activities mentioned above.

When Rahu, the shadow planet secures the seventh position in one’s Kundli, then such a native tends to be spendthrift, has a bitter tongue, hot tempered, greedy, clever and incurs losses in his/her business. At the end, such a native gets into partnership with his/her life partner or someone from the opposite gender and runs a business venture to make a living.

Rahu in the eighth house makes a native the beholder of a petite body structure and he/she occasionally keeps earning gains and losses. The native remains in the possession of wealth but there is a dearth of happiness and luxury in his/her life. Such a person earns a livelihood through the wrong means. Also, the native gets into partnership with women and carry out certain trade ventures or gets enrolled in a job. They can also get involved in tasks which have some foreign connections.

When the planet Rahu’s presence is noticed in the ninth house of the Kundli or birth chart of any person, then the person gets associated with writing and printing work and dedicates his/her life to social causes. Especially, such a person is associated with aquatic activities and his/her fate blooms after the age of 37 years. But luck never ceases to support such a person and they can get things done with help of their luck factor.

If the planet Rahu remains posited in the tenth house of any person’s birth chart or horoscope, then such a person tends to be very arrogant and wealthy at the same time, occasionally nurtures feelings of jealousy in his/her mind, executes things as per the directions of the life-partner, wish to possess the wealth of other people, is mighty, intelligent, knowledgeable, touristy, well acknowledged by royalty and attains his/her livelihood by associating with drama/poetry. Such a person often avails benefits from the government sector.

When Rahu, the shadow planet takes nest in the eleventh house of one’s Kundli, then such a native tends to be attractive, has a dusky complexion, practices Scriptures, is a scholar, hard working, a business person, earns an establishment through royal patronage and avails benefits from it as well. He/she gets enrolled in a job or business ventures which deals with things like food, clothing, ornaments, money, animals, vehicles etc. Such a person earns monetary benefits easily.

Last but not the least, let us talk about Rahu in the twelfth house which makes a native a working professional. But at the same time, such a native also finds it difficult to avail many profits if he/she is associated with business. Additionally, such people appear to be hardworking, foolish, paranoid, somewhat mentally unstable, insidious and lowly. Their only source of income continues to be the foreign connections.

On a concluding note, we would like the readers to know that the predictions given above with regards to the planet Rahu and its position in twelve houses can only provide you with generic kinds of results . If you wish to know customized and personalized results about your career, business and professional status, then your birth date, time and place of birth would be necessary to come to conclusions which will be exclusively tailored for you.

Thank You so much for connecting with AstroSage. Stay safe and stay healthy!!