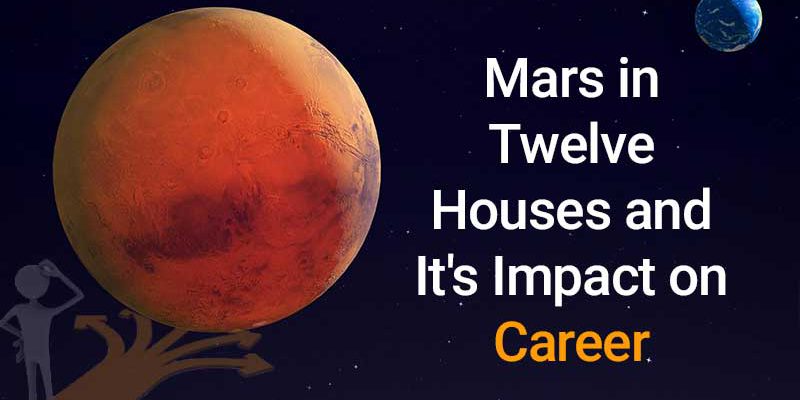 In the realm of astrology, the planet Mars is considered to be the significator of might as per the Kaal Purush Kundli. The planet is also known as the minister of all Navagrahas. It has governance over aspects like might, energy, courage, self confidence, patience, patriotism, strength, blood, firmness, ambitions, the ability to undertake challenges, anger, hatred, excitement, lies and knowledge about weapons or armoury. Through this blog today, we will tell you how the planet Mars works out in various houses and its impact on your career and profession specifically. On this note, we would like to tell you about the  CogniAstro Career Counselling Report which you can avail to make yourself successful and prosperous in your respective fields.

The planet Mars is the ruling Lord of Scorpio and Aries zodiac signs. It remains exalted in Capricorn and debilitated in Cancer. It also has lordship over Mrigashira, Chitra and Dhanishta Nakshatras.

The basic characteristics represented by this planet are fertility and rejuvenation. Nevertheless, this planet is said to be inauspicious, cruel, deadly, etc. Being determined by the fire element, Mars provides vitality to all living beings and is a provider of encouragement, enthusiasm and courage.

Now, let us now move on to find out how Mars performs in various houses in the Kundli.

Mars is the significator of land. This is the reason why those natives who have Mars posited in their ascendant house tend to remain forever young and also provide the person with immovable properties. Along with this, such a native also receives immovable properties as a part of their family heirloom. Usually natives with an ascendant Mars are successful and possess riches. They also happen to take an interest in feels like Medical and Engineering and make great progress in them. The concerned individuals also remain successful in earning money on account of their hard work and generally remain in a position to take their business and trade ventures forward.

Natives who have Mars posited in the second house generally happen to be the eldest child of the house. Mars in this house enables a native to acquire wealth and riches from his or her in-laws which further helps the person to take his or her projects forward. However, seeds of fury remain implanted in such a person’s behaviour and they value their Independence religiously. Success and riches become available at their disposal. Unfortunately, such a native can also be a victim of some kind of addiction and multiple hurdles may be encountered by them in the academic field.

Mars in the third house makes a person courageous and mighteous. Such an individual can create their own path of success on account of their hard work, diligence and might. If Mars remains posited in the third house in the Kundli, then the native can lay hands on a government job, after successfully clearing a competitive exam. Such a native also stays away from undertaking loans. You may pave the way for profits for many but it is not necessary that you will get the same in return. You will create a special space for yourself in the society on account of your abilities. Acquiring a technical degree is what interests you the most. You can also join a service as an Engineer. If you try, then you can definitely avail a government job. You can join such a service where arms and weapons are used extensively, that is you may either join the police or Army. On the economic front, you will remain prosperous and there will be no dearth of money. With great diligence, you will solve the economic problems that remain a part of your way.

Mars in the fourth house enables a person to enjoy a prolific economic status. The native owns a house of his/her own and gets enrolled in a respectable government job. People with Mars in fourth house can also land up in a favourable profession after successfully clearing a Competitive exam. Also, joining the police force or army is a probability. The concerned individuals usually stay in a foreign land. So, you should keep looking for job opportunities made available abroad. Mars in the fourth house also helps a native to acquire the patronage of the government or senior officials.

Mars in the fifth house makes a person excel in the field of sports. No matter whatever sports they play, they are bound to earn a good name because of it. Also, there are great prospects of such an individual becoming a doctor. The person is very fond of travelling and also of betting at the same time. You may also have to incur losses in this. It is advised not to take any decision in your business without discretion. Keep in mind, if you join the army then stay connected with sports, as this will definitely provide you with success.

Mars of the sixth house exerts immense power in the native and he/she always emerges victorious. If such a person wants to pursue a career in politics, then success is definitely on the cards. You can fulfill your desires with the help of your strong will power and hard work. On account of a competition, you may also get a job. You can become a good surgeon or doctor and earn a lot of money. If you want to make a career in sports, then you are likely to make a great name.

When Mars remains positioned in the seventh house, it enables a person to become a successful businessman. Upon working hard with diligence, he or she also becomes worthy of earning name and fame in the society. However, this position of Mars is not quite profitable for making economic advances. This may be the reason for such natives making unnecessary expenditures. If Mars is situated in your seventh house and you adhere to partnership in business, then your business partner may be the reason for your downfall. Hence it would be better if you keep working while maintaining a prudent state of mind.

When Mars remains positioned in the eighth house, then the native may have to work with supreme diligence constantly, so as to remain at the receiving end of economic prosperity. The economic influence of Mars while it remains posited in this house cannot be regarded as positive. There are also chances of you acquiring riches through multiple ways. You may earn money in a secretive manner and also get involved in some secret tasks. If Mars is present in a malefic manner or it is negatively influencing your Kundli, then your hard work may fail to bear the fruits of success.

The native will acquire name, fame and prosperity in business due to Mars’ presence in the ninth house, but will not feel comfortable despite the inflow of such positivity. If you are a doctor and Mars is in your ninth house, then this yoga will prove to be very favourable. You will definitely receive respect and earn a good name. For occupations like Engineer, Goldsmith, Blacksmith, etc. Mars can be regarded as a beneficial significator.

When Mars remains present in the tenth house, then you can pursue a career in the field of Electronic Engineering. If you are engaged in trade ventures which deal with armoury and Uniforms, then a good amount of revenue can be earned. You may also join the police force and also try your luck in the medical field. Mars in this house also makes you proficient in the knowledge of surgery. This is also a good position for lawyers. You can even acquire an important place in the field of politics. Such natives have full knowledge on the art of diplomacy and possess great political management abilities.

The eleventh house is also hailed as the house of profits and Mars in this house also becomes the reason for acquiring benefits by many. But this can only happen once you put your investments to use in your business. The traders buy the land with money, after that the land is divided into pieces and they can be sold to make profits in large amounts. Mars situated in the eleventh house makes you patient and courageous. As a matter of fact, you can change your fortunes with your actions when Mars remains posited in this house.

Mars in the twelfth house generates some hot headedness in natives. Also due to Mars’ presence here, people often think of seizing the wealth and property of others. You will also be less inclined towards religious activities. If you are associated with them for some reason, even then you tend to focus less on the importance of religion. Such a native also gets associated with foreign lands and those tasks which have some foreign connections.

This is how the planet Mars impacts your career and other aspects of your profession. The descriptions given above are only regarding the position of Mars in various houses and its connection with one’s career as well as business. For more specialized results, your Kundli needs to be assessed with regards to your name, place, date of birth and many other crucial information.

We hope that you will appreciate this blog. Stay healthy and stay safe!!