Sushant Singh Rajput starrer Chhichhore is hitting the theatres on 6 September 2019, and promises something fun, endearing and heartwarming for the viewers. It is a Hindi movie starring Shraddha Kapoor in the parallel female lead, and Varun Sharma, Prateik Babbar in the supporting cast. The movie is directed by the Dangal famed director Nitesh Tiwari, and showcases the lifestyle and attitude of the youth from 1992 till the present. Chhichhore revolves around a bunch of seven friends who learned the importance of friendship and loyalty in their college life, and how much effort they put in to save the son of Sushant Singh Rajput and Shraddha Kapoor’s son after they both grew old.

This has been stated that only the theme song of Chhichhore costed around 9 Crs. to make. It would be interesting to watch how well this movie will do at the box office. To get a detailed insight, we have brought to you astrological analysis of this movie based on the principles of Vedic Astrology, where the Prashna Kundli is analysed and movie predictions are given.

Chhichhore: Pointers As Per Astrology 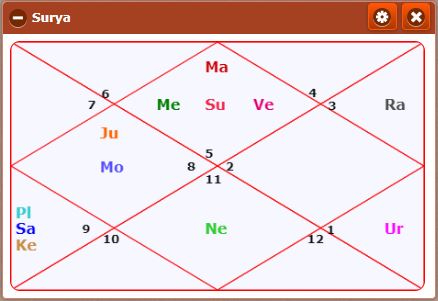 Now let’s check the prospects of these three planets viz Mercury, Jupiter and Ketu in the above kundli for future prospects.

We wish all the best to the full star cast and crew members.