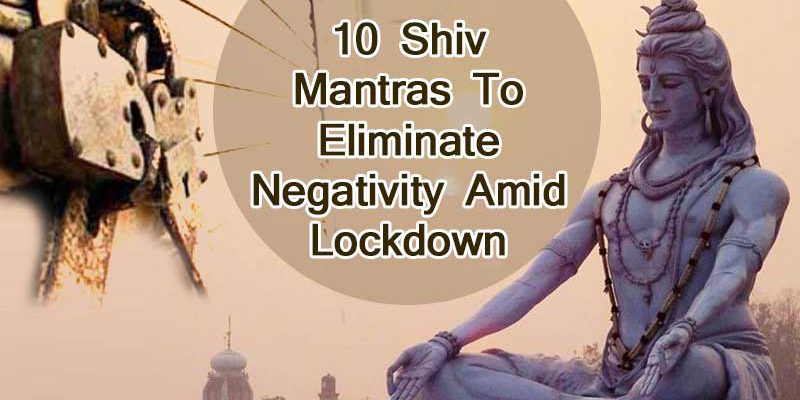 As we all know Lord Shiva is widely popular for his fierce and calm avatars. He completes the dire wishes of his devotees whenever asked for a boon with a pure heart. One of the primary deities of Hindu religion and culture, Shiv Ji is also known as ‘Adiyogi’. In such times when the whole world is fighting deadly Epidemics such as Coronavirus, chanting powerful Shiv Mantras can help to build  and strengthen mental health and infuse a sense of positivity in our lives.

Natives belonging to the spiritual as the well as the materialistic realms, all of them worship him heartily. Meanwhile, Shani Dev, Sage Kashyap and Ravana happen to be Lord Shiva’s primary disciples. Since he treats all the elements of this Universe equally, the list of his followers or devotees remain inflated as compared to other divine beings. Residents of all the three worlds offer great reverence to Lord Shiva and offer him prayers devotedly.

Generally, Lord Shiva is also referred to as Bholenath. Many also believe that he pays visit to his devotees, upon being called earnestly. On this note, we would like to give away some Mantras, which can be taken into account to appease Lord Shiva. The recitation of these Mantras ensure the endowment of Lord Shiva. The meanings and benefits are provided in the upcoming sections of this blog.

It is believed that the recitation of this Mantra provides liberation from the shackles of birth and death. Reciting it continuously helps to eradicate the persistent difficulties of life

Explanation – We worship the three eyed Lord Shiva who takes care of the entire Universe and its residents. We offer our prayers to Lord Shiva to offer us salvation from the shackles of death.

Explanation : By reciting this Stuti/laudation, we hope that Lord Shiva provides me redemption and safeguard me from all kinds of nightmares, negative thoughts, ill omens, wrong companionship, fear, anxiety, disturbance, planetary defects, disease and all sorts of negativity.

Devotees chant this Mantra so as to obtain salvation from all kinds of sins committed by them. This recitation provides one with self strength and also cleanses one’s soul.

The recitation of this Mantra appeases Lord Shiva greatly and all kinds of negative energy are removed from a person’s life. It also ensures mental and physical strength.

This happens to be the Beej Mantra of Lord Shiva. Its regular recitation helps one to appease the Lord. Chanting this Mantra also safeguards one from untimely death.

This Mantra is considered to be the most powerful and it is with the recitation of this Mantra that Lord Shiva can be most easily appeased. One should start reciting this Mantra from Monday onwards.

Given below are some popular Mantras associated with Lord Shiva. The recitation of these Mantras becomes helpful in removing obstacles and difficulties from life.

This happens to be the most popular Mantra associated with Lord Shiva. It is believed that on one has been able to measure the power, beheld by this Mantra. Some scholars deny its vigour, because of the fact that it is not a Panchakshari Mantra. Namah: Shivay is considered to be the actual Panchakshari Mantra of Lord Shiva. However, your feelings or intentions are considered to be the most important while chanting Mantras, which is why many of the troubles come to an end when one chants this Mantra with a devoted heart and mind.

This Mantra associated with Lord Shiva is also considered to beget many auspicious outcomes. As per astrological considerations, the due desires of one’s heart gets fulfilled with the recitation of this Mantra and problems remain at bay. adding to this, a person’s societal stature also increases and he/she is granted recognition in the society, after successfully reciting this Mantra.

Wealth and prosperity flows into one’s life with the recitation of this Mantra. If one keeps reciting it regularly, then he/she doesn’t encounter problems in accumulating wealth. Also, it ensures the prosperity of one’s household.

One is granted redemption from various diseases, if he/she keeps reciting this Mantra of Lord Shiva. Along with this, if you are being hunted by any kind of fear, then it can also vanish with the successful recitation of this Mantra.

Even the most serious of illnesses can be cured with the recitation of this Mantra.

So, above given are the important Mantras associated with Lord Shiva. The regular recitation of this Mantra helps one to obtain the benediction of Shiv Ji. Of all the other Gods and Goddesses, Bholenath is the one who remains all prepped to safeguard his devotees from all kinds of dangers and problems, which is why he is hailed as the custodian of this Universe, in the realm of Hindu culture and religion.