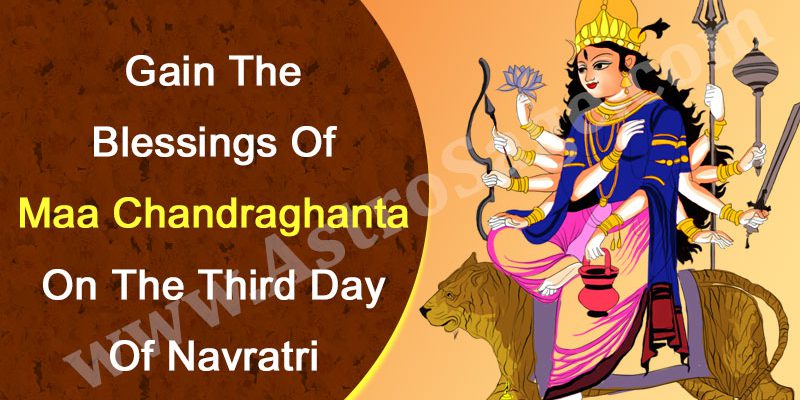 The third fast of Sharad Navratri is observed today, i.e. 1 October 2019, Tuesday. On this day, Maa Chandraghanta is worshipped with true devotion. It is believed that whosoever worships the Goddess according to the rituals and rites attains courage and valour. Also, with the blessings of the Goddess, all the sufferings and illnesses in one’s life goes away. Let us know through this article the special importance of worshiping Maa Chandraghanta:-

Worshipping Maa Chandraghanta On The Third Day Of Navratri

On the third day of Navratri, Maa Chandraghanta is venerated. As per the beliefs, this form of the Goddess eliminates all the pain and sorrows in one’s life, as this divine form of the Goddess is known to be an epitome of welfare and peace, and offer courage and valour to the devotees.

Maa Chandraghanta in her Form

It is believed that the mere worship of Goddess Shakti in the form of Maa Chandraghanta brings spiritual and intellectual strength to the natives. The puja rituals for the third day of Navratri are as follows:

As we have already said that there is a provision for worshiping Maa Chandraghanta especially on the third day in Navratri. It is believed that on this day, the agile and fickle minded devotees of Maa enters the Manipur Chakra. As a result, by the grace of Maa Chandraghanta, the native gains seraphic experiences, which gives him a sense of pleasure in spite of all the sorrows.

Followers of Hinduism also celebrate Sindoor Tritiya, also known as Saubhagya Teej and Gauri Teej, on the third day of Navratri. The festival of Sindoor Tritiya is celebrated with great fanfare mainly by women in many states, including Bengal and Bihar. It is believed that this day represents Goddess Parvati, the married form of Maa Chandraghanta, due to which women greet each other by applying the Sindoor or Vermillion.

Happy Navratri 2019 to all the readers from AstroSage! We hope that the blessings of Goddess Shakti Maa Chandraghanta remain on you forever.