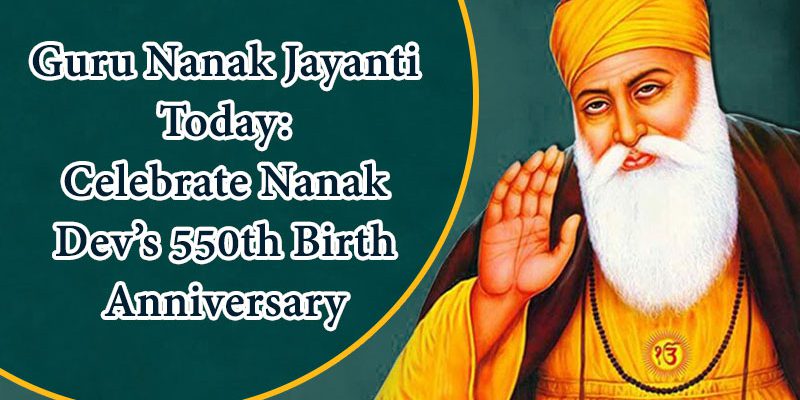 Every year, the full moon or Purnima Tithi of Kartik month is celebrated as the birth anniversary of Guru Nanak Dev, the first religious leader of the Sikh community. It is believed that Guru Nanak Dev Ji was born on 15 April 1469 in a place called Talwandi Raibhoy, which is now currently known by the name Nankana Sahib. This place happens to be a big city located in the Punjab province of Pakistan. Since Guru Nanak Dev was born in this place,  it was named after him and later came to be known as Nankana Sahib. Among the historical and religious places for the followers of Sikh religion,  Nankana Sahib happens to be a prominent one. Sikh community people from all over the world visit this place to obtain the blessings of Guru Nanak.

In the current year, i.e. 2019, Guru Nanak Jayanti will be celebrated on Tuesday, 12 November. Thus, it will be celebrated all over the world today. The Sikh community people take part in the Nanak Jayanti celebrations with great joy and fervour. Just like the festival of lights, Diwali occupies a special place in the hearts of Hindu people, in the same manner, Sikh people also celebrate Guru Nanak’s birth anniversary just like a grand festival. On this day Shabad-Kirtan and majestic programs are organized in Gurdwaras all over the world. On this occasion, Guruvani is recited in various places and Langars are organized to provide food to the poor and needy.

History states that Guru Nanak Dev was extremely intelligent and spiritual from his early days, which is why legends associated with Nanak Ji’s childhood and life are quite popular all over the world. From his very childhood, he seemed disinterested towards the material pursuits of life. Unlike the other children of his age, he remained inclined towards spirituality rather than focusing on studies and sports. Only at the age of 7-8, he used to answer questions which was considered very difficult by the teachers too. The miracles shown by him from his very childhood granted him the enlightened one. During his lifetime, he opposed many religious and superstitious evils. He gave many sermons to the people, which carried the essence that God is one and his worship is for the followers of every religion.

Get Predictions based on your Birth Chart

The principles or sermons inaugurated by Guru Nanak Dev were not only popular among the followers of Sikh religion, but also followed by many others in the current century too. By following the teachings, a person can not only make his/her life successful, but can also achieve every kind of happiness in life. Following are the teachings of Guru Nanak:

Get Your Free Kundli Here

Every year, some special tasks and rituals should be followed during Guru Nanak Jayanti, which are mentioned below.

We hope that you will appreciate this article of ours. We wish you a very happy Guru Nanak Jayanti. Thankyou for staying connected with us!!!