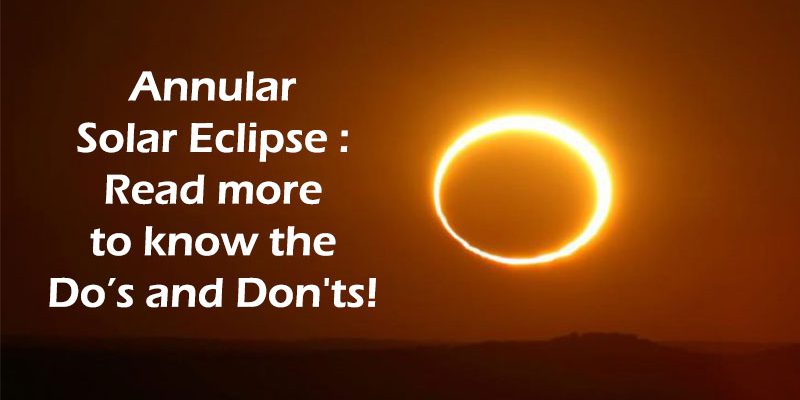 Annular Solar Eclipse – Read more to find out the remedies to observe on this day to avoid falling prey to its harmful repercussions. Additionally, get complete information about its Sutak Period here.

A celestial event like Solar Eclipse is given much prominence in the realm of Hinduism. Ours is a culture which gives prevalence to many fasts, festivals and events. The Solar Eclipse is also one of them. Most of the people are seen making efforts to know the exact time and date of Solar Eclipses of a particular year as there are many things which should be kept in mind during the occurrence of such a celestial event. From the religious point of view too, astrologers recommend to observe certain remedies which should be observed on this day. At the same time, it is also advised to avoid the commemoration of certain tasks while the Solar eclipse is taking place. In the year 2019, three Solar Eclipses are scheduled to take place, out of which two have already taken place previously. The third is yet to take place on 26 December 2019, which will be annular in nature. Most of its visibility will remain active in India, Australia and some other Asian countries. In India too, seleactive parts particularly the South Indian part will bear witness to this annular Solar Eclipse. Let us now have a look at the timings of the upcoming annular Solar Eclipse.

As it is mentioned several times, Solar Eclipse, also known as Surya Grahan in Hindi is of great importance to the followers of Hindu religion and culture. It takes place when the Planet Moon comes between the Sun and Earth and inturn covers a significant portion of the Sun. What follows after is what we call Solar Eclipse. Since the eclipse will be partially visible from our country, we should take the astrological impacts into account and observe the necessary measures which will be mentioned in the upcoming sections of this blog.

As per the Hindu Panchang, the third and annular Solar Eclipse of 2019 will occur on the Amavasya Tithi of Paush month. Further astrological calculations suggest that it will take place in the Sagittarius zodiac sign  while the Moola Nakshatra is going on. In such a situation, it can be said that natives who are under the governance of this particular sign and Nakshatra can remain at the receiving end of adverse outcomes. Sagittarius zodiac sign is ruled by the planet Jupiter, while the Moola Nakshatra is governed by the cruel Ketu. In order to keep the negative repercussions of this Eclipse at bay, it is advised to pacify the ruling Lords of the concerned zodiac signs and Nakshatras. Accordingly, one should wear Guru Yantra  and Ketu Yantra to pacify Jupiter and Ketu respectively.

The Sutak period during any eclipse can be described as the time which is regarded as highly inauspicious to carry out certain tasks and activities. The same has been said because it is believed that negative results come to the forefront if any auspicious activity is performed during the concerned time frame. Usually, the Sutak Kaal or period begins right before the eclipse and concludes when the Eclipse comes to an end. Natives should take a proper bath after the completion of the Sutak period. Here, readers should know that the Sutak kaal or period is not taken into account in the case of children, elderly people and those who are sick. Let us now have a look at the Sutak Kaal Timings for Annular Eclipse 2019, which is mentioned below.

As we all know, there are certain things which should be kept in mind when the Annular solar eclipse occurs. Let us carefully take a look at the Do’s and Don’ts of Solar Eclipse.

Special Things To be Kept in Mind by Pregnant Ladies

The duration in which the eclipse takes place is very sensitive for pregnant women. Hence, they are advised to remain very cautious. Such women should avoid stepping out of the house and not perform activities like embroidery, sewing, cutting, knitting or chopping vegetables and fruits. The performance of such risky activities may generate threats for the unborn baby residing in the wombs of the respective women, which is why they are advised to maintain the necessary precautions.

We are hopeful that you will like this article on Annular Solar Eclipse. Thankyou for staying connected with AstroSage!!