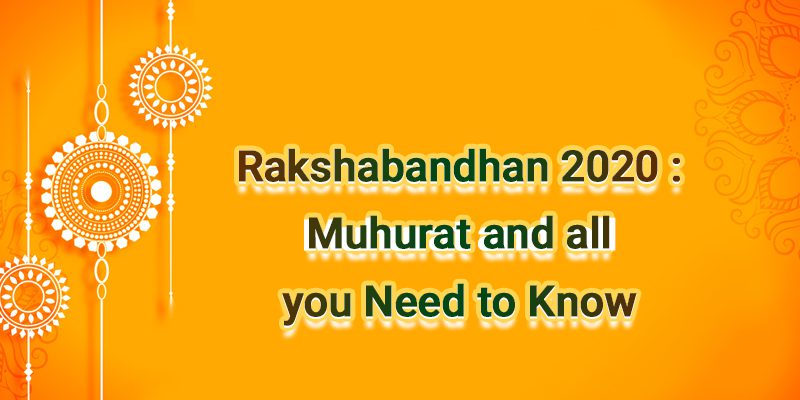 Raksha Bandhan marks the celebration of the bond which exists between a brother and the sister. Despite the unending quarrels and sibling rivalries, no brother and sister can stop themselves from celebrating Raksha Bandhan. If you wish to know your bond with your brother or other family members, then go ahead and give a call to our expert astrologers.

The day is an epitome of the love which exists between siblings and sisters pray for the long life of their respective brothers and in return a brother promises to take care of his sister and stand by her through the thicks and thins of life. Moreover, if you wish to know about the crucial aspects of your own life, then you can order a copy of AstroSage’s  Brihat Kundali.

Now it is known to all that sisters conduct the Tilak in accordance with a Shubh Muhurat ties the Rakhi on their brothers’ wrist and the brothers, in turn, give them protection and blessing. But have you ever thought why we keep repeating these traditions each and every year and how they came into prominence in the first place? Why is it so necessary to put a Tilak on the forehead and tie a rakhi on the wrist. If you are also wondering about these questions now, then you have arrived at the right place as we will be providing you with the correct answers to these burning questions. Along with this, we will also be telling you the auspicious Muhurat to tie Rakhi in the year 2020 and gifts which the brothers can select for their sisters according to their zodiac signs. So without any further delay let us get going.

Note : This Muhurat is valid for New Delhi area only. Click here for the Muhurat in your city!

Things to be Kept in Mind While Tying Rakhi

This festival of Raksha Bandhan is known by many names in different parts of the country. In Uttaranchal it is popularly known as “Shravani”, while in Rajasthan this festival is known by the name of Ramrakhi and Chudarakhi. Here, people tie this sacred thread of silk with raw milk and only then do they proceed for their meals. The people of southern part of India i.e. in Tamil Nadu, Kerala and also Orissa, celebrate Raksha Bandhan as “Avani Avitam”.

Why is Tilak Put on the Brother’s Forehead?

As it has already been mentioned, on the day of Rakshabandhan, sisters apply a Tilak on their forehead with Kumkum, sandalwood or saffron after tying a Rakhi on their brothers’ wrist. Some people also use rice in Tilak. But have you ever wondered why  this particular tradition is carried out. There are both scientific and religious reasons behind applying Tilak.

Tilak is considered to be the epitome of love, respect, victory and might. It should always be applied on the centre part of the forehead as this space is regarded as the location of the sixth sense or fire wheel. It is from this place that power and energy are transmitted throughout the body. According to science, applying Tilak with a pressure on the middle of the forehead increases one’s memory and self-confidence, strengthens decision-making abilities, increases intellectual and logical abilities and also increases strength and intelligence.

Overall speaking, it can be said that the benefits acquired after applying a Tilak can prove to be useful for a brother to save his sister. Hence it is considered quite important for a sister to apply Tilak on her brother’s forehead. This basically means that a sister is preparing her brother so that he can protect her in the future which is why it becomes a responsibility of the sister to apply Tilak on her brother’s forehead on the day of Raksha Bandhan.

Why are Rice Grains Used Along with the Tilak?

While talking about Tilak it also becomes necessary to bring to your notice the rice grains which have been put on a brother’s forehead along with the Tilak. Readers should know that of all the grains rice is considered to be the most auspicious and pious one to be offered to the Gods and Goddesses. It is believed that if raw rice grains are used along with the Tilak then it brings an inflow of positive energy in a person’s life. It also ensures the eradication of negativity from the person’s life.

We hope that you will appreciate this blog of ours on Rakshabandhan! Wish you a very happy and prosperous Rakhi!!