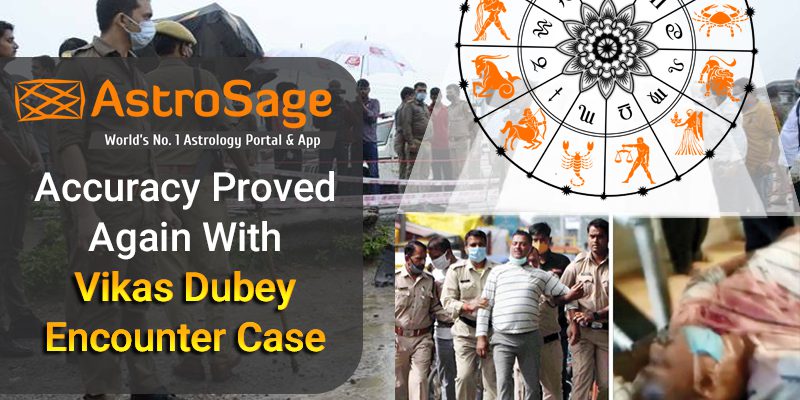 When no one knew the whereabouts of Vikas Dubey: AstroSage revealed the date of his arrest.

When no one knew what would happen after Vikas Dubey’s arrest – AstroSage gave out accurate predictions about his encounter.

Yes, 1000 per cent accurate prediction! Such a prediction which is difficult to predict even by an astrologer after evaluating the stars! But WE DID IT! Actually, a large section of the country believes Astrology to be mere superstition and owns no authenticity. Such people should carefully read two big predictions made by astrologer Acharya Raman Ji in the last four days on AstroSage, the country’s largest online astrology portal. The sole reason for people’s trust in AstroSage is the scientific approach and accurate predictions, which was proved yet again by Acharya Raman’s two articles.

The first article was written on July 6, when the entire country was questioning about Vikas Dubey’s whereabouts and asking ‘Where is Vikas Dubey and when will he be caught’. On this, Acharya Dubey gave out predictions based on his astrological calculations. You can read the article by clicking the link below:

But speaking about a specific part of this article, it was clearly written,

And this happened! The prediction came to be 100% true, and Vikas Dubey got arrested in Ujjain on 9 July, morning.

But after this, a question arose in everyone’s mind that whether or not Vikas Dubey will be punished by the court. Acharya Raman wrote an article while investigating the answer to this question. This article was published on AstroSage on July 9. You can read the article by clicking the link below:

Read: Breaking News: With Vikas Dubey Arrest, Astrology Reveals What’s Next For Him!

The main prediction in this article was:

“…Vikas Dubey is currently undergoing an inauspicious period to the point that his life is at stake.”

In this article, Acharya Raman further clarified and wrote:

“It is also predicted that something can happen in this case in the coming 14-15 days, that will take people by surprise. Taking a hint from it, it can be said that before September, a major mishap can happen in Vikas Dubey’s life.”

Every sensible person understood that this big accident is nothing but an encounter.

Acharya Raman Ji proved his authenticity by providing two major predictions accurately. With this, AstroSage once again proved that predictions offered are made entirely on the basis of astrological evaluation and not emotions.

Interestingly, Acharya Raman wrote a detailed article about how certain incidents such as police arrests and encounters can be predicted on AstroSage. This article can prove to be extremely helpful and important for students pursuing their career in Astrology. You can read the article by clicking the link below:

AstroSage has time and again proved its genuineness and dependability with such predictions. We try our best to maintain a scientific perspective while providing our audience with astrological articles and predictions. After the predictions made in these two articles turned out to be true, several people shared their comments on Facebook, Twitter etc. where they stated that they have been a part of AstroSage from a long time back and witnessed almost 90 per cent of the predictions coming true. This is really encouraging for us.

Hypocrisy and Fraud have taken over the domain of astrology, due to which any amateur claims it to be fake and deceptive without any knowledge or know-how. However, AstroSage constantly tries to keep the viewers and readers in light by highlighting the astrological calculations behind every prediction. AstroSage strongly opposes fraud amateurs and deceptive astrologers and urges all of you to develop a logical perspective towards Astrology rather than believing it to be a superstition. Thank you for giving so much love to AstrroSage. We hope to maintain a scientific approach towards our predictions through our articles.