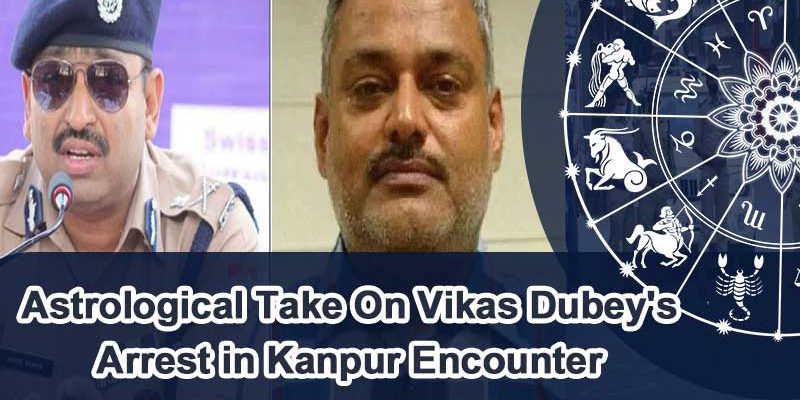 Today, Vikas Dubey has emerged as the most-wanted criminal in Uttar Pradesh. The police team that went to capture him was ambushed, during which Dubey’s companions attacked the team with modern weapons. In this, eight police personnel were martyred during the service.

Kanpur Shootout Accused Still On The Run From Police

It has rarely been heard before that a criminal has attacked the police personnel in and caused major damage to the force. Many days have passed since this incident and Vikas Dubey’s house, as well as his cars, has been demolished by the police. However, his whereabouts are still unknown.

Considering the seriousness of the case, several teams of police are raiding places all over the state to catch the infamous Vikas Dubey. In such a case, AstroSage has taken the help of astrology and tried to shed light on the whereabouts of Vikas Dubey and after how long he will be caught.

After seeking Astrologer Acharya Raman’s view on this, this is what he evaluated and predicted:

“This is the first attempt ever made by me to peek into this type of matter astrologically, and I am more concerned about the criminal being caught rather than what’s right or wrong, I wish Vikas Dubey should get caught by the police at the earliest and get the death penalty.”

I resorted to the Prashna Kundli on the date 4th July 2020 at 19:20 minutes. Below is the said horoscope. 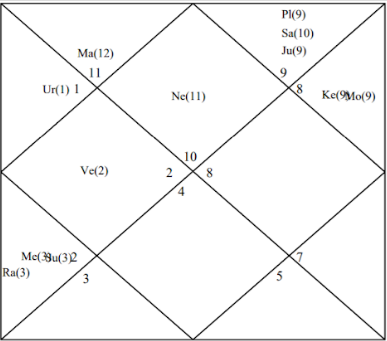 Here we will consider Lagna as the absconding criminal. The sub-constellation of the Lagna is Mercury. Mercury is retrograde at the time of question, in the fifth house and in the constellation of Rahu. Rahu is also creating a conjunction with the Sun and Mercury, and the planets Jupiter and Moon are aspecting it. That is, Rahu will give out the fruits accordingly and is himself transiting in the sign of Mercury.

The sub-constellation of Ascendant in the horoscope is Mercury, which is in the fifth house, that is, the twelfth from the sixth house. It clearly indicates that Vikas Dubey is far away from the clutches of law. Rahu is also the sub-constellation lord of tenth, eleventh and twelfth house. In such a case, Rahu’s relationship with the twelfth house indicates that he will certainly go to jail, but the question is when?

When Will Vikas Dubey Get Arrested?

If we look at Ketu, it is seen posited in the Sagittarius sign. Except for the Moon, Saturn and Guru are not only in retrograde motion but have delayed pattern and effect on an incident. Saturn’s repetition in the ruling planets twice is showing that Vikas Dubey will not be caught soon. On the other hand, the Lagna Nakshatra is the Moon and he is with Ketu in the 11th house.

Currently, Saturn is undergoing its Antaradasha and will turn direct around mid-day on 29 September 2020. Saturn is the lord of Ascendant and in the twelfth house. On September 4, the Antara of Saturn will end and the Antara of Mercury will begin. Rahu is the 11th cusp sub lord.

Therefore, it is predicted that Vikas Dubey will either get arrested or encountered by the Police Force by either 8th or 9th. In such a case, it is evident that we may have to wait until Saturn gets direct.

To Connect With Acharya Raman Ji On Call, CLICK HERE

Good Luck To The Police Force.

Note:  AstroSage has made an effort to know when Vikas Dubey will be arrested through this astrological assessment. This analysis is completely based on astrology. In this case, how accurate is our prediction can only be known after Vikas Dubey’s arrest.  In such a situation, we hope that Vikas Dubey will be soon put behind the bars. At the same time, we also express our condolences to the family of all the police personnel who were martyred during this encounter.