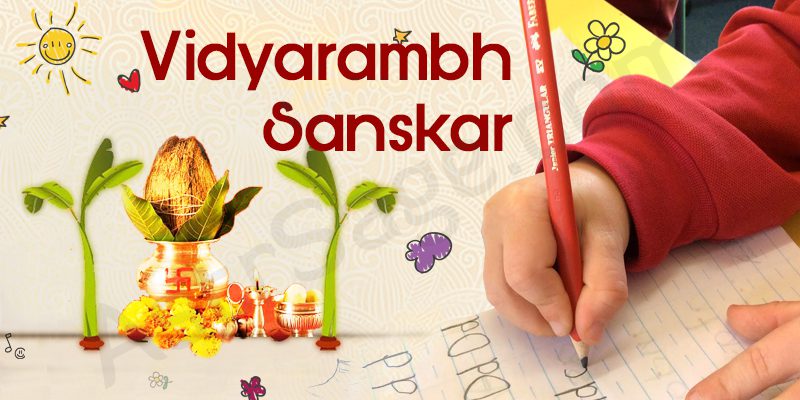 In India, every person spectates and becomes a part of many Sanskar ceremonies during his lifetime. Every Sanskar has its specific relevance. One such Sanskar which has supreme importance is Vidyarambh Sanskar. Knowledge and education have an important place in every tradition. However, the Hindu religion keeps them on the supreme pedestal. This is the reason why Vidyarambh Sanskar ceremony is commemorated when a child sets foot on the fifth year of his life.

The child gets to develop an inclination towards knowledge and studies along with other hobbies and the parents also realise their duties with the help of this ritual. This article will explain intricate details about Vidyarambh Sanskar.

Right Age To Solemnize The Ceremony

Vidyarambh Sanskar commemorations are so that the child develops a liking for knowledge and studies. According to astrology, the fifth year of a child’s life is the appropriate time to organise the ceremony. In contemporary times, people would start educating their children before the auspicious and accurate age. Considering instances like these, it is appropriate to say that no matter when you begin to teach your child, it is essential to start the ceremony with Vidyarambh Sanskar.

However, the CogniAstro Report for 10th class students has become a key in eliminating several problems for both students and parents in today’s era. With the help of this report, students can choose the right career path based on their personality and glorify their future.

Knowledge and education have always been an inherent part of Indian psyche. The presence of ancient universities like Takshashila and Nalanda have proven this over and over. In ancient times, students from various parts of the world used to come to India only to gain knowledge from these popular universities.

Considering the importance of knowledge, the Indian society has made provisions for children to develop a fondness and curiosity for learning. Through this sanskar, an attempt is made to generate academic interest in the child’s mind. Parents offer prayers during this Sanskar so that the child can attain proper social and ethical qualities.

Everyone is aware of the importance of knowledge and education in a person’s life. An educated person contributes generously to the society and helps to improve it. The more a community is educated, the less nuisance it will bear. However, the information solely gathered from books cannot be given the status of ‘Knowledge’. The actual knowledge is the one which enhances your conscience and develops your intellect. The facts mentioned above increases the relevance of Vidyarambh Sanskar in the social context so that with the help of this Sanskar, the child can appropriately use his conscience and knowledge.

However, choosing the right stream or course after 12th can be a challenge, and to resolve this problem, 12th class students can resort to CogniAstro Report. At the same time, the CogniAstro Career Report can also emerge as a one-shot solution for rising problems in the job and business.

Things To Keep In Mind During Vidyarambh Ceremony

The child should be given flowers, akshat or rice and roli or sacred red thread to offer in front of an idol or picture of Lord Ganesha while chanting mantras.

Lord Ganesha is also the guiding force of one’s conscience. One should pray and wish the positive development of the child’s conscience from him. Along with that, prayers should be offered for rapid growth of the child’s intellect.

Get the Most Detailed Kundli Report Ever with Brihat Horoscope Predictions

The child should be given flowers, akshat or rice and roli or sacred red thread to offer in front of an idol or picture of Goddess Saraswati while chanting mantras.

Maa Saraswati is considered the Goddess of knowledge, art and compassion. During the puja, wish for the child to gain the blessings of Devi Saraswati and his/her interest in knowledge and art remains intact.

After offering prayers to Lord Ganesha and Goddess Saraswati, worship the equipment used in school to gain education (ink, pen, pad). Observing their importance, bless these tools with mantras so that their initial impact can motivate and benefit the child.

During Vidyarambh Sanskar, the child is given a quill to hold for the first time. Dhriti is considered the Goddess of quill and represents virtues like interest and curiosity. A person will grow and develop if he possesses the interest and zeal for knowledge.  If the zeal is missing, then the person will remain unsuccessful in life. Without procuring an interest in something, one cannot prosper in life. During Kalam Pujan, prayers should be offered to Goddess Dhriti so that the child’s interest and curiosity towards knowledge keep increasing. Prayers are also offered so that the child gains academic success.

The child should offer akshat, flowers and roli to the quill placed in the altar.

During the ceremony, the guardians should pray to Goddess Dhriti to bless the child with intellect and focus to gain success towards the attainment of knowledge.

The quill and the inkpot are incompetent without each other. One can write with a quill, only when it is filled with ink. This is why Dawat Pujan is performed after offering prayers to the quill. Pushti is considered to be the dormant Goddess of Dwat (inkpot) and represents ‘concentration’. It is important to offer prayers to Goddess Pushti because a focused mind can understand things quickly. The inkpot is also worshipped with Roli, incense, akshat and flowers after tying a roli on its neck.

The child should offer puja materials such as rice, thread and flowers to the ink pot while mantras are being chanted.

The parents should pray so that the child is blessed with great concentration power under the guidance of Goddess Pushti.

Prayers are offered to the slate (Patti) after the pen and inkpot. The usage of the quill (or any other writing equipment) and inkpot depend on the availability of paper or slate. The Goddess of Slate is Tushti and represents hard work and industriousness. One needs to work hard to attain good knowledge. Although many people have the blessings of interest, curiosity, and concentration power, however, the absence of industriousness and devotion can block their path of knowledge. In order to possess these qualities, one offer prayers to Goddess Tushti.

The child should offer the Puja items to the sacred slate while mantras are being chanted.

The guardians should wish that power of Tushti will keep the child industrious and that he shall become hardworking at every step of his life.

A teacher is necessary for the dissemination of knowledge. A teacher removes darkness from his pupil’s life just like a lamp with the luminescence of knowledge. During Vidyarambh Sanskar, the child offers prayers to its teacher. This Sanskar adds to the level of respect a student has for his teacher. The teacher also be committed to teaching the right things. According to Hindu Shastras, a teacher’s position is greater than Lord Brahma. One places their teacher on such a pedestal because it is only through the Guru that we acquire knowledge about this universe.

If the guru/teacher is not present in the ceremony then once can offer prayers to a coconut instead while chanting mantras.

In this ritual, one offers prayers for the development of good virtues in child. Also, they ask that he/she understands the lessons that their teacher teaches and flourishes in future.

Know Which Career is Appropriate for you, Get CogniAstro Report for Grade 12th

The child should write “ॐ भूर्भुवः स्वः / oṃ bhūrbhuvaḥ svaḥ” on the slate or a piece of paper. The teacher can write down the mantra first and the parents can help the child to overwrite on it. The teacher can also hold the child’s hand and make him/her write this mantra. In this mantra, Om is the supreme name of the Almighty, ‘bhur’ means hard work, ‘bhuvah’ means patience and ‘swaha’ means conscience. The child writes these words because they represent virtues which are extremely important to acquire in order to succeed in life. The auspiciousness of the ritual increases if the Guru/Teacher conducts it.

The child offers flowers and akshat to the slate or paper where “oṃ bhūrbhuvaḥ svaḥ” is written, and those present, chant the mantras.

Astrologers believe that any the knowledge gained that is not expressed or put to use, loses its importance. During Akshar Pujan, the child is made to imbibe this virtue. In the first phase of attaining knowledge, the parents try to invoke the virtue of curiosity and expression in the child.

During the last phase of this ceremony, mix the items required for the special offering or havan. Now the child makes five offerings of this mixture. During this time, one should pray that the energy produced by the yagna purifies the child’s character and fulfils his mental development.

After the special offering, one should carry out blessings, immersion, and acclamation to commemorate the yagna successfully. With the distribution of Prasad, the Vidyarambh ceremony comes to an end.

We hope to benefit you with this article about one of the Hindu sanskars, Vidyarambh Sanskar.