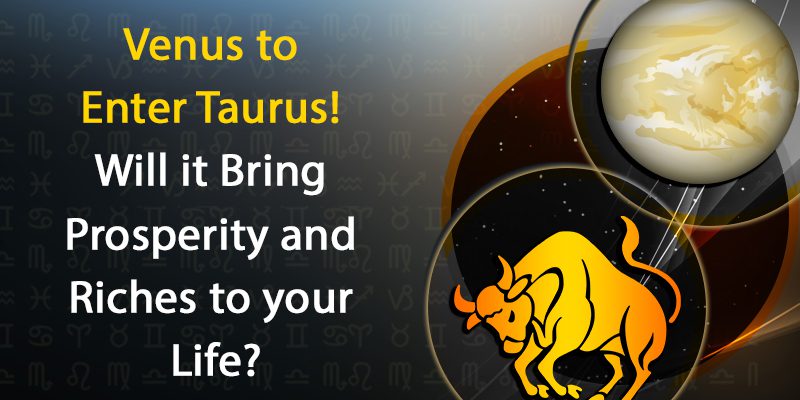 On Saturday, 28th March 2020, the planet Venus will move into its own zodiac sign, Taurus at 15:36 in the afternoon. In the realm of Vedic astrology, the planet Venus is considered to be the significator of all kinds of prosperity and riches.

Needless to say, it occupies quite an important status in the domain of Vedic astrology. The same planet also governs aspects like money and sensuality. It has been said that each and every aspect of our lives come under the governance of planets. Venus is very much stated liable for the marriage prospects of male natives. At the same time, Jupiter or Guru is considered responsible for the marital alliances of female natives.

Get the Best Career Options with CogniAstro Career Counselling Report !

If the planet Venus is auspiciously situated in a person’s Kundli, then the concerned native acquires happiness and splendor in his/her life. On the contrary, when Venus adorns a debilitated state, natives come into terms with many kinds of problems. The Taurus zodiac sign is determined by the earth element, and along with this, readers should also know that, it happens to be the own zodiac sign of Venus. In such a situation, the desire of happiness will increase in people due to this celestial phenomenon taking place in the sign of Venus.

Let us now have a look at the transit predictions for all the twelve zodiac signs.

The planet Venus will move through your second house to take a nest in Taurus zodiac sign ultimately. Along with being the ruling lord of your second house, the morning star also rules over your seventh house. Due to this particular planetary movement……Read More

The transit of Venus is specifically noteworthy for Taureans because it is taking place in your zodiac sign only. Venus is also your zodiac lord and also rules over your sixth house. When the morning star moves into your first house, your health may experience some ups and…….Read More

The transit of the planet Venus is quite crucial for you and it will enter your twelfth house. For your zodiac sign, the morning star is the ruling Lord of fifth as well as the twelfth houses. Under the influence of this planetary movement, your expenses will increase all of a sudden. Consequently……Read More

The transit of Venus will take place in your eleventh house and the same planet also happens to be the ruling lord of your fourth and eleventh houses. Venus’ presence in its own house will bring bouts of monetary happiness for you. You will……Read More

The tenth house of Leo natives will host the transit of Venus, who is primarily transiting into Taurus. For your zodiac sign, the governor of love also rules over your third and tenth houses. Now coming back to this transit of Venus…..Read More

The morning star Venus is the ruling lord of your second and ninth houses. During its stay in Taurus primarily, it will move through your ninth house, which is also known as the house of your luck. The result of this planetary movement will……Read More

For Scorpio natives, this transit will prove to be quite beneficial, since Venus is the ruling lord of your seventh house and it will move back to its own sign, during its transitory motion. The same planet is also………Read More

The transit of Venus will take place in the sixth house of your zodiac sign. This means that the morning star will remain posited in its own house. Along with being the ruling Lord of the sixth house, Venus also governs your eleventh bhava. This position of Venus is not……Read More

The transit of Venus is a crucial celestial phenomenon for your zodiac sign because it happens to be Yogakaraka planet for you. During its transitory movement, the significator of love will enter your……Read More

This transit of Venus will bring bouts of happiness and prosperity to your life. Also, you will be granted access to many kinds of comforts and luxuries. The morning star will move to enter your fourth house, which……Read More

For the last sign of the zodiac circle, the planet Venus happens to be the ruling lord of your third and eighth houses. This transit may bring some ups and downs in your life, which is why you are advised to remain somewhat……..Read More