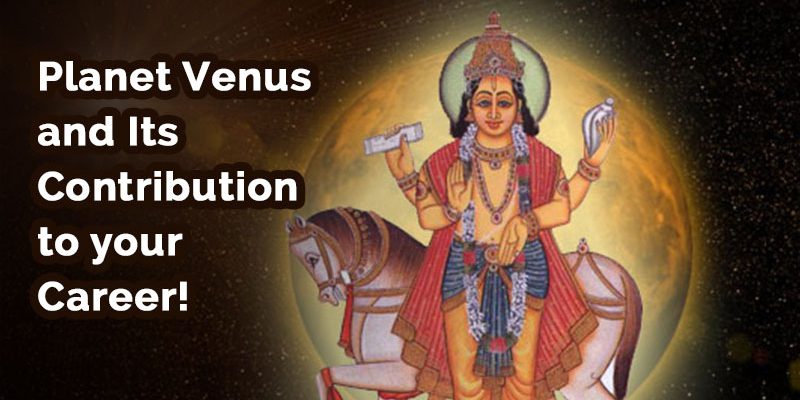 In the domain of astrology, Venus is considered to be the most resplendent planet of the solar system.  rules over the zodiac signs Taurus and Libra. It attains its special powers when it remains posited in the zodiac sign Libra. Pisces is its exalted sign and Virgo happens to be its debilitated sign. The planet is also considered to be the significator of husband and wife relations, love affairs and prosperity in one’s life. It also leaves a significant impact on one’s career. You would be pleased to know that the AstroSage Special CogniAstro Report for Professionals can be availed to get a clearer picture of one’s career.

If it is positively situated in a person’s Kundli or birth chart then he or she can lead a very wonderful luxurious and comfortable life. Those who remain under the planet’s influence tend to be very attractive and also kind hearted at the same time. Venus’  influence brings the luxury of a house and vehicle in one’s life. The brightness and radiance of Venus is quite different and unique from other planets. By paying homage to Venus and observing remedies to strengthen it, happiness and opulence can be found in abundance. Female natives influenced by the planet Venus very often win beauty pageants. There are some planets as well, which support such young women to take their career forward, but as the ruling planets for other contestants start prevailing over them, they may get kicked out of the race. In such a case, Venus plays a very important role for them.

Nevertheless, let us now go on to discuss what significant impacts can the planet Venus bring into the professional lives of natives, thereby getting posited in all the twelve houses or Bhavas.

Venus situated in the first/ascendant house makes the native fond of art, interested in music, dance and painting and he/she has close ties with the top officials. Generally, Venus in the first house makes one’s fortunes stronger thereby bringing happiness into the lives of people.  If you wish to know more about your career, then you can get a copy of our CogniAstro report for Professionals.

Venus when remains seated in the second house provides riches and economic prosperity in abundance. It also inspires the concerned native to start a business venture along with his/her life partner. The individual is attractive to look at and leads a comfortable life. He/she gets associated with works which are related to magnificent and beautiful things, confectionery, popular things, jewelry, earthen goods, agriculture, animals, poetry recitation, etc.

Venus in the third house makes a native quite a miser, he/she is also lazy, a painter, a scholar and is fond of traveling. It also shows the accumulation of spiritual deeds and denotes business ventures related to abroad. Also, such a person trades and works in social media, entertainment, online, other services.

When Venus is present in the fourth house of a native’s Kundli, then it represents his or her personal life or romantic affairs. Along with this, such a person also gets associated with some foreign based trade ventures along with their siblings. Such an individual also is associated with jobs or business ventures related to Media, Textiles, furniture, artistic stuff, cars, architecture, land, vehicle, horse, lake, river, sea, drain, pond, etc.

When Venus remains positioned in the fifth house and under such a condition, a native represents social issues or else proves to be a very good politician. The individual also gets easily associated with artistic activities, entertainment and makes a career out of hall and party business, romance, love, movies or any other entertainment mediums. The native also pursues a career in materialistic arenas like Sports, Opera, drama, music dance, Share Market, Betting, Match fixing and Lottery.

If Venus is situated in the sixth house of the Kundli/Birth chart, then such a person pursues a career in politics, judiciary proceedings, works for communal harmony and labor organizations in the country, and also some tasks related with the nation’s Defense and Military. Such a person is associated with health, medical services and becomes health workers such as a nurse, dentist and doctor. Also, Married natives who are on the lookout for a perfect career for their children can use our CogniAstro Report for 10th and 12th Standard respectively.

If the planet Venus is situated in the seventh house of one’s Kundli, then such a native gets associated with the field of spirituality and makes a career out of it. Creativity and maternal family members are also two other aspects which assists him/her in career formation. Land and property related business ventures also contribute to the success of such people.

If Venus is situated in the eighth house of the Kundli, then such a person possesses long life expectancy, but also a bitter tongue. He/she also remains under a debt . Such a person does business and jobs related to Mining, Coal, Speculative trade, Lottery, esoteric subjects and spiritual things.

When Venus is situated in the ninth house of one’s Kundli, then such a native attains his livelihood by doing religious work, government service and sports related work and spends his life in a happy manner.

If Venus is situated in the tenth house of the Kundli, then such a person gets involved in business, prosperity, earns respect from the government, gets appointed as a senior official, does horse riding, athletics, social service, agriculture, powerful works, teaching, presidency, etc.

When Venus remains seated in this house of the Kundli, then such a native gets associated with gemstones and white coloured objects professionally. Along with this such a person also becomes associated with knowledge, Share Market, Music, Films and also collaborates with his/her friends for charity and can make a career out of them.

If the planet Venus is situated in the twelfth house of the Kundli, then such a person is closely associated with Philanthropy, charitable or Rehabilitation institutions, prison, refugee camps and hospitals etc. These people with the planet Venus seated in this house get work done which are related to criminals, spies, secret forces and secret enemies, takes ground level jobs and are also associated with the Ministry.

So, this is how the planet Venus and its position in twelve houses can affect your professional life. The predictions given above are of generic nature. If you wish to know customized and personalized results, then your birth date, time and place of birth would be necessary to come into conclusions.