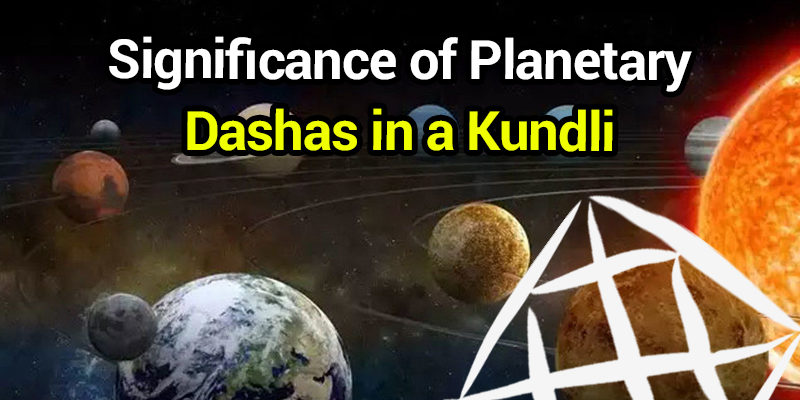 Planetary Dashas, as we know, have been given an important place in Vedic astrology and it is believed that whatever happens in our life is possible only because of the Dasha of a particular planet manifesting its effect.

Whether an event will take place or not, the confirmation of the occurrence or not of that event in the horoscope depends the most on the dominant Mahadasha, Antardasha and Pratyantar Dasha at that particular time. While the placement and positioning of good planets opens the doors of happiness, prosperity and progress in life, the condition of inauspicious planets creates a lot of problems in life. These auspicious and inauspicious planets can take various positions on each horoscope.

In the realm of astrology, any prediction is made on the basis of the Dashas because the transit of the planets and the occurrence or non-occurrence of any event in the horoscope is tested on the basis of the conditions coming into being at that time and in the future. Hence, the planetary Dasha is quite important and has a huge impact on our lives. In what kind of direction will we move in our life, will we go on the right path or can we follow the wrong path, will we be healthy or diseases will surround us or will we progress in our career or will we have to face failure? All this comes to us as a result of the influence of some planetary conditions.

Significance of Dashas in Astrology

Dashas are very important under Vedic astrology and they are able to show the complete sequence of all kinds of situations, good and bad, that take place in the life span of a person. When good times will come in a person’s life and when bad times will come, when he will progress in life and when he will have to suffer, all this is possible only due to the effect of the conditions.

Vedic astrology believes in the principle of karma and reincarnation, that is, according to the Karma/actions we have attributed in our previous lives, according to the same actions, in the present time, we get pain and happiness in life and in providing those pains and pleasures. Hence, Dashas play an important role. If we get good results in the Dasha of a particular planet, then we also get bad results in the Dasha of any particular planet. All this is the result of the deeds done in our previous births, which the planets bestow upon us in their special conditions. This is the reason that planetary Dasha is most important and effective in the life of any person.

Is Luck Favourable or Unfavourable? Raj Yoga Report Reveals It All!

Types of Dashas in Astrology

Various types of Dashas have found a mention in Vedic astrology, of which the most important and popular one is Vimshottari Dasha. Apart from this, there are many other Dashas like Ashtotri dasha, Yogini dasha, Jaimini dasha, Kalachakra dasha, etc.

The Vimshottari Dasha, as we have spoken about before is considered to be the first and most accurate in Vedic astrology, is considered to be of 120 years, in which all the nine planets have a special Dasha period. This is a Nakshatra based dasha i.e. the Nakshatra in which the Moon is situated at the time of birth, the birth Mahadasha of the lord planet of that Nakshatra is received by the person at the time of birth and in the same way the Dasha sequence proceeds. If a person is born in Kritika, Poorvashadha or Poorva Phalguni Nakshatra, then the Sun/Surya Dev is the lord of all these three Nakshatras, then that person will go through the Mahadasha of the Sun at the time of birth. Given below is the list of the asha period of all the planets, then it is as follows:

The order of Mahadashas is as per above Dasha description i.e. if a person is born in Punarvasu Nakshatra which is the Nakshatra of Jupiter, then that person will get Mahadasha of Jupiter at the time of birth and post that Mahadasha of Saturn will start.

The Mahadasha of Rahu will be the final dasha according to the Mahadasha and it’s period increases by 120 years in this sequence.

After Vimshottari Dasha, Yogini Dasha is also given a significant amount of importance. This is also a Nakshatra based Dasha which lasts for 36 years and after 36 years the same Dasha Karma gets repeated again. Some people also call it Ashta Yogini Dasha. In this Dasha also, their planetary Dasha has been named according to the influence of different planets. This Dasha is calculated on the basis of all the 27 constellations/Nakshtras and a particular planet in its time gives auspicious or inauspicious results to the person.

The names of Yogini Dasha are considered to be Mangala, Pingala, Dhanya, Bhramari, Bhadrika, Ulka, Siddha and Sankata respectively and their Dasha sequences are also in increasing order from each other. The effect period of these Dashas are given below:

Any Bhogya period of the above dashas occurs for 36 years and after the end of 36 years, this sequence is repeated again i.e. after 8 years of crisis, then Mangala Dasha starts again and then the same sequence continues. The different directions of Ashta-Yogini Dasha can be understood as follows:

First of all, Yogini Dasha is known as Mangala. Its total duration is 1 year and the ruling planet of this dasha is the Moon. This Dasha is considered to give auspicious results and mainly the person gets blessed with happiness, wealth, good fortune and prosperity in this Dasha.

After Mangala Yogini Dasha, the next dasha is named Pingala. The ruling planet of this Dasha is Surya Dev and it lasts for 2 years. This dasha is also considered favorable and during this Dasha, a person gets freedom from troubles and gets progress in life along with getting happiness and wealth.

This is the third Yogini Dasha, also known as Dhanya and has a duration of 3 years. The ruling lord of this Dasha is Dev Guru Brihaspati. This is considered to be a very auspicious Dasha and during this Dasha period, the person gets all kinds of wealth and grains and the person grows progressively in life.

Bhramari Yogini Dasha is the fourth Dasha in the order of Ashta Yogini Dasha. The duration of this Dasha is of total 4 years and its ruling lord is Mangal Dev or Mars. Due to the influence of Mars in this Dasha, a native tends to remain irritated. During this Dasha, there is an excess of anger inside the person and he/she has to face many kinds of troubles. There are chances of loss financially and the person may get confused in this duration.

Bhadrika is said to be the fifth Yogini dasha. Its duration is 5 years and the lord of this Dasha planet Mercury. In this dasha, a person gets good results from his/her good deeds. The enemies of such a person tend to disappear and the troubles in life begin to end. If there are any problems and obstacles in the life of a person for a long time, then in this condition they get removed.

Ulka Yogini Dasha comes sixth in the list of Yogini Dashas. Its total duration is 6 years and the lord of this direction is Shani Dev. This Dasha makes a person work very hard and his/her work also gets delayed very often. Success comes only after hard work and diligence. For this reason, there is more rush and busyness in life and delays in work start and some kind of troubles also have to be faced.

The seventh dasha in the order of Ashta Yogini Dasha is Siddha Yogini Dasha. Its total duration is 7 years and its ruling lord is Venus. This is considered to be a very auspicious Dasha. In this dasha, the person gets all kinds of material comforts. He gets the benefit of clothes, jewellery, money and food grains. Love and attraction increase in the life of the native. The wealth of a person increases and there are no shortages in life. Overall, the person makes good progress.

The last and eighth dasha in the Ashta Yogini Dasha Chakra is the Sankata Yogini Dasha. Its total duration is 8 years and its owner is Rahu Maharaj or the shadow planet Rahu. This Dasha induces sufferings and is not considered auspicious. In this Dasha, a person has to face difficulties and some problems arrive in his life.

These Dashas provide results according to their nature and position, provide good and bad effects and on the basis of the deeds done in the previous birth of the person, they get auspicious and inauspicious results.

Shani Report: Know The Impact Of Saturn On Your Life

Dasha Phal According to Different Houses of Horoscope

If any planet is a Yogakaraka in a horoscope, then any planet forms Raj Yoga.If you also want to know that according to the position of the planets in your horoscope, if there is any Raj Yoga in your horoscope, then you can get its success in the condition of the planet that creates that Raj Yoga. You can also easily know from AstroSage’s Raj Yoga report tha Raj Yoga is being formed in your Kundli and what will be its effect.

Because of the influence of this Dasha, the position of the planet itself is the most important. If the planet is exalted, it gives respect to the person. On the other hand, being in an inauspicious position leads to physical problems, mental stress, financial loss and many types of problems. It is necessary to see in which Nakshatra this person was born, in which position the lord of that Nakshatra is from the Dasha lord planet constellation. If he is a close friend or an acquaintance, he gives very good results, but if he is an extreme enemy, he does not shy away from giving bad results.