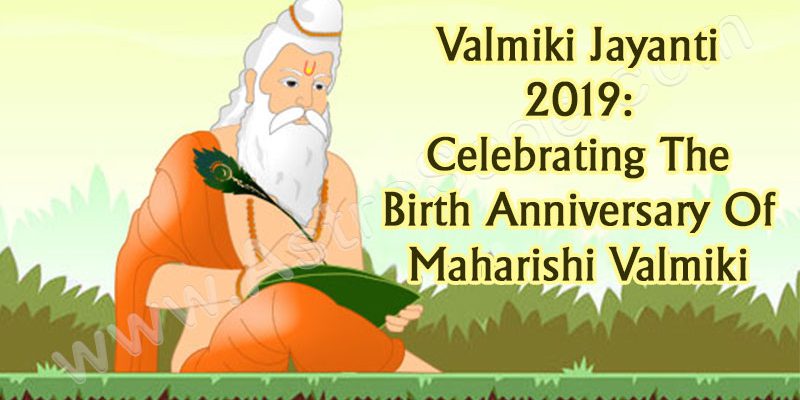 Valmiki Jayanti, also known as Pargat Diwas, is widely celebrated by Valmiki religious groups all around the globe. This day commemorates the birth anniversary of Maharishi Valmiki, the great philosopher and Indian poet, who was the creator of the ever-epic Ramayana. In the year 2019, this day is observed on 13 October and falls on the Purnima or Full Moon day during the Ashwin month according to the Hindu Lunar Calendar. Below is the auspicious muhurat during which you can carry out the worshipping rituals and venerate the great sage.

Note: The above timings are mentioned as for New Delhi, India.

Valmiki Jayanti commemorates the birth anniversary of the great poet and sage Maharishi Valmiki. He is famously known as the author of Ramayana and popularly called as the Adi Kavi. He is believed to be an avatar of God himself, and hence revered by the devotees. He is depicted as the one wearing a saffron-colored robe with a paper-quill in the hand.

As per the mythological legend, he was known as Ratnakar, the ferocious dacoit. However, Narada Muni advised him to perform the penance. After innumerable years, his penance bore fruit, and he attained the name Valmiki, the one born from the anthills. In the epic Ramayana, the Maharishi took Maa Sita in after she got banished by Lord Ram, helped her get on her feet and nurture Luv & Kusha, her and Rama’s twins.

The festival of Valmiki Jayanti falls on the Purnima during Ashwin month. In the year 2019, Sharad Purnima falls on the similar day, and hence, the coincidence is regarded as an auspicious one. Devotees on this day can fast to attain desired results, and women wanting to have kids must also observe the fast. Any auspicious task can be performed on this day.