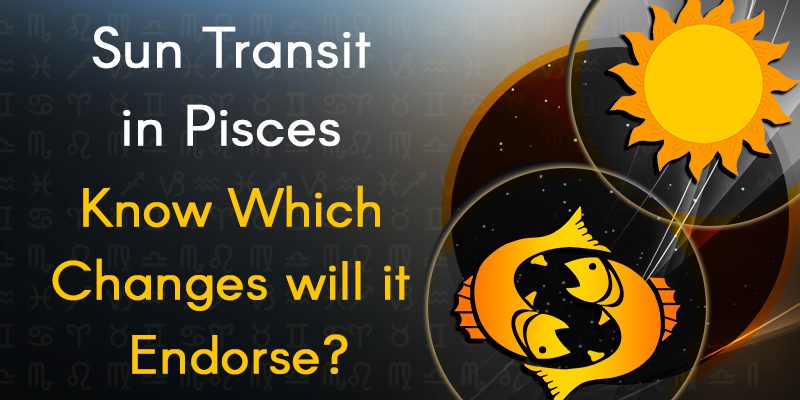 On the 14th March, 2020 which is Saturday, the royal planet Sun will move out of Aquarius and take a nest in the last sign registered under the zodiac circle, which is Pisces. On this day, the planet Sun will enter its friend Jupiter’s zodiac sign at 11:45 AM at noon.

For Immediate Problem Solving and Queries, Ask a Question Now

The transit movement of Surya Dev is known as Sankranti, which is why when it moves into Pisces, the celestial event will be known as Meen Sankranti. The zodiac sign Pisces happens to be determined by water and Sun represents the fire element. As per Vedic astrology, the planet Sun is considered to be the King of all the nine planets (Navagrahas).

Get Detailed Life Report Based On Your Kundli: Brihat Horoscope

If the planet Sun is situated in a strong condition in one’s Kundli, then the person possesses all kinds of honour, praises and reputation in the society. But if the Sun is not situated in a strong position in the Kundl, then the concerned person has to face many troubles and difficulties in life. However, in order to strengthen a debilitated Sun, some remedies have been mentioned in Vedic astrology. You can adopt them to get rid of the troubles persisting in your life. Let us now know how the Sun transit (Meen Sankranti) will affect the folks of all the 12 zodiac signs:

For natives belonging to the zodiac sign Aries, the royal planet Sun happens to be the ruling lord of your fifth house and it also maintains amicable relations with your…..Read More

For Taureans, the planet Sun happens to the ruling Lord of your fourth house and during its transitory movement, it will move through your eleventh house, which is famously known as the house of….Read More

For natives belonging to the zodiac sign Gemini, the planet Sun happens to be your fourth house’s ruling lord and during its transit duration, the royal planet will move through your…….Read More

Chandra dev or the planet moon is the ruling Lord of your zodiac sign and it maintains great and friendly relations with the now transiting planet, the Sun. So the royal planet rules over your second house and will transit into your…..Read More

The transitory movement of the Sun is specifically important for your zodiac sign because the royal planet happens to be your sign’s ruling Lord. During its stay in Pisces, Surya Dev will move through your….Read More

For those who are born under the zodiac sign Virgo, the planet Sun happens to be the ruling lord of your twelfth bhava, the house of expenses. During its stay in the zodiac sign Pisces, the…..Read More

For Librans, Surya Dev is the ruling lord of your house of profits, which means the eleventh house. During its stay in the zodiac sign Pisces, the planet will be seen occupying your…..Read More

For the natives belonging to the zodiac sign Scorpio, the planet Sun is the ruling lord of your tenth house, which is also hailed as the house of profession or “Karm”. During its transitory motion, this planet will move into your…..Read More

Sagittarius, the ninth sign registered under the zodiac circle will witness the transit of sun taking place in their fourth house. The same planet also happens to be the ruling lord of your……Read More

For the ones born under the zodiac sign Capricorn, Surya Dev is the ruling lord if your Ayu Bhava, which means that the eighth houses, the significator of life expectancy. According to Vedic astrology, the Sun is free from……Read More

Surya Dev is the ruling lord of your seventh house and during its transit in the last sign of the zodiac circle, its presence will be witnessed in your second house. Under the influence of this planetary movement, both you and your life partner’s……Read More

For the last sign of the zodiac circle, Surya Dev or the planet Sun will move to your first house, which is why this transit will prove to be quite crucial. You will also remain under the optimum influence of this……Read More