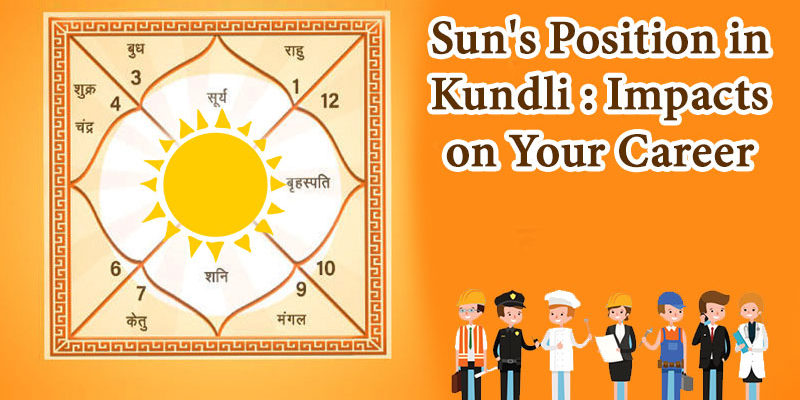 The Sun is known as the king of all the planets and the energy on the whole earth comes all the way from this planet. This is the reason why the planet Sun is always considered to be revered on earth. According to astrology, the position of the Sun in the horoscope of a person reflects a lot about the person, so the position of the Sun in the horoscope is considered important. It is said that the Sun situated at an auspicious place in the horoscope brings all the happiness, honor, fame, success in career, etc.
In such a situation, in this special article of ours today, we will know how does it impact one’s career.

The planet Sun is considered to be the king of all the Navagrahas and it is the sole source of energy that is distributed among the entire Universe. This is the reason why the Sun is kept on a certain pedestal and hailed for its fostering qualities. Also, with the help of the position of the Sun, you can choose the right career field for and some further help can also come through you with the help of the CogniAstro Career Counselling Report.

As per the science of astrology, the position of the Sun in one’s Kundli or birth chart tells a lot about a particular person; its state is considered to be very crucial. The Sun is also considered to be the soul of this Universe it is the sole significator responsible for one’s establishment and position.Its main factors include strength, sharpness, safe space, respect, honor, ambition, wickedness, old age, father, man or mortal, worship, fire, cowardice, mother’s children, etc.

Speak With World’s Best Astrologers On Call & Know Everything About This Week In The Context Of  The Career, Finance, Health Etc.

The royal planet also leaves a commendable impact on our career in many different ways. Its presence in one of the twelve houses brings forth many changes to our professional life, which in turn also creates some ups and downs which we have to face in our working career. However, when our Kundlis are being analyzed, then it is also extremely important to take into account the birth details, the aspection, conjunction and transit of various planets and their relations with one another. Let us now take a look at how the Sun can leave an impact on your career while it remains posited in all the 12 houses of one’s Kundli.

As we all know, the Sun is determined by the fire element and its presence in the first house is considered to be auspicious. The same also makes a person possess good health and also a royal personality. It may also be the cause of less hair density and eye problems. Experts and scriptures of astrology suggest that a person can also prove to be a very successful politician for a living and also becomes an influential personality of the society. Along with this, he or she does not hesitate to commit a courageous task, and gets agitated easily. The person’s body temperature usually remains high and he or she doesn’t usually care about prestige and reputations. The person has a supreme will power and tends to be timid sometimes and usually doesn’t get involved in fights and conflicts. Such an individual is also very well established in the society.

The Sun is the governing body of aspects like self respect which determines aspects like fire, armory poison and when it remains posited in the second house, the planet becomes the cause of separation and differences between the members of a household. According to Mansagari text, such an individual does not believe in being dependent on anyone to get their tasks done. The person can also earn their fortune by getting associated with trade ventures which deal with Iron or Copper. Most of them are seen joining their family business ultimately.

As per ancient texts of astrology, the presence of malefic planets in the third house makes a person courageous and mighteous. Since the luminary planet, Sun is not categorised as a malefic planet, its presence makes a person diligent and hardworking. He/she becomes efficient to cope up with stress and difficulties. Professional life is what interests such a native the most. This means that they can pave the way for success by getting enrolled in a job rather than initiating a business venture. The presence of the Sun in the third house is not considered auspicious for one’s siblings.  However, differences are likely to come into the forefront with respect to the aspection of other planets and their position as well as if it gets conjuncted with them.

When it comes to the position of the Sun in the fourth house, the divine beings are of the view that such an individual is graced with a royal position or a government service and attains the benediction of the Gods. However, many scholars do not consider the Sun in the fourth house to be auspicious because it remains in a  weak state in this house.

The fifth house is the representative of children, mental state, mindset, education, childhood, grandparents etc. As per the Kaal Purush, it is hailed as the ruler of the fifth house. Therefore, the position of the Sun in the fifth house provides one with a son or fewer children, courage, intelligence, sharpness, etc. Sun is not considered to bring forth auspicious results in the fifth house. If Mercury and Guru are conjugated with the Sun in this house, then the natives may turn out to be retarded. Such an individual also comes out as a successful business person. As the years pass by, the person’s efficiency in business increases.

The presence of the Sun in the sixth house can provide one with economic success as well as a pleasant and respectable personality. It may also cause eye diseases when a particular native enters his or her 28th year. As per astrology, it is considered auspicious for the Sun to remain present in the sixth house but some difficulties may crop up for the maternal family members of concerned individuals. According to the Fal Dipika, Sun the sixth house enables a person to lead a royal life. He or she attends prosperity, fame and is admired by everyone and also outshines his or her enemies easily. Some of them also serve or get enrolled in higher administrative posts. At the same time the Sun is also capable of giving away some diseases when it remains posited in the sixth house.

According to texts and astrologers, the Sun in the seventh house is not considered good for one’s marital life. According to the Faldipika, the seventh house Sun makes the native an officer and also a treasury businessman. Such a native follows some sinful instincts, becomes ill due to excessive physical intimacy and suffers from health problems. The Sun of the seventh house induces some kind of nervousness in one’s personal life and gives away success in business. Such a person can get associated with gemstones.

According to the Faldipika, a person possesses long life expectancy, benevolence knowledge about astrology, attains unexpected gains in life and generally tends to lead a very simple life. Also, such a native remains inflicted with several kinds of diseases and eye disorders in particular. The Sun is the ruling Lord of the fifth house and determined one’s eyes. While being posited in the eighth house, it makes the native capable of acquiring a large amount of wealth. Such a native also earns some secret wealth. However, most of the money earned through questionable sources enable them to face wrath of the government.

According to Kaal Purush Chakra, a person is fortunate, independent-minded and also a high-ranking official in the government sector due to the presence of Panchmesh Sun(ruler of fifth house) in the ninth bhava. Due to this placement, a native will turn out to be ambitious and passionate. Such an individual may also be clever, interested in performing virtuous work, deprived of paternal affection at a young age and is blessed with virtuous children. Very often, he/she can adopt his/her father’s occupation and the position very well depends on the father and his post.

The Sun remains in a ‘Digbali’ state when it remains posited in the tenth House. So when the sun remains present in this house, it makes a native disciplined, hard working, aware of his/her position and reputation in the society as well as the beholder of some imperialist qualities. When the Panchmesh Sun and remains present in the tenth House of a person’s Kundli, then it creates a Raja Yoga. Because of this, success comes following into the concerned individual’s life. Some also receive the endowment and patronage of some superior officials. Success can be easily achieved if he/she gets involved in government work and diplomacy. The individual attains praises just like a king does and leads a courageous, healthy and disease free life.

The planet Sun in the eleventh house provides a native with the ability to get engaged in a royal service, making him/her possess wealth, courage and intelligence and also the talent to outshine enemies on account of their own intelligence. Due to the placement of other planets, the person can also be rich, have a beautiful wife/husband, possess some amount of political influence and can also become a great achiever. The Sun present in this house enables the inflow of a good amount of wealth, both in terms of job and business.

The presence of the Sun in the twelfth house is not considered to be much auspicious. According to the Shastras, such individuals love to go out for hunting sprees occasionally, taking out animals and birds. Usually, the native also lives in a foreign country and follows its cultures and traditions. Sun in this house helps a native to acquire success in a foreign land and also provide some others with opportunities to visit a foreign country.

AstroSage has many professional reports which can help natives from various walks of life to attain professional success. Check out the list of reports given below.

Connect with Acharyaa Sunil Barmola on call/chat to know more about its impact.

Thankyou so much for connecting with AstroSage!