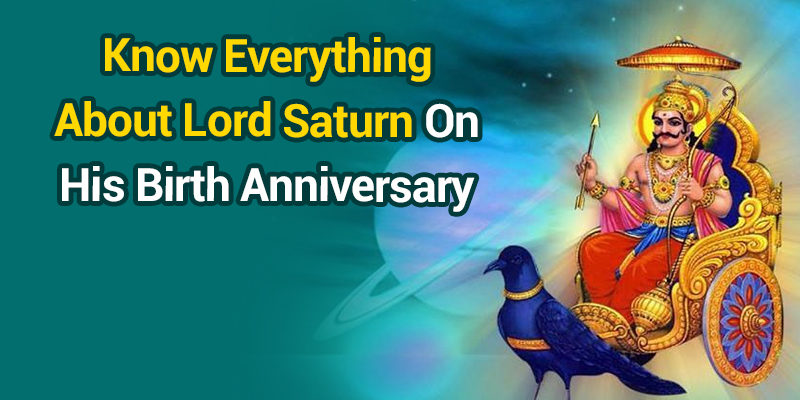 Shani Jayanti will be celebrated today, i.e. on June 10, Thursday. Lord Shani was born on the Amavasya Tithi or New Moon Day in the month of Jyeshtha, which is why Shani Jayanti is celebrated on the day of Jyeshtha Amavasya. This year, the Solar Eclipse is occurring on the day of Shani Jayanti, and therefore, its significant impact will be seen on the lives of the natives and the economy of the country in the era of Corona. Let us know about interesting facts related to Shani Jayanti and find out more about planetary yoga.

Usually, Shani or Saturn is deemed as a planet delivering unfavourable outcomes, but it is fascinating to know that this planet is titled as the God of Justice in Hinduism. According to astrology, Shani Dev seems to be fair in his approach and known as the one playing the role of a Justice or Judge in the lives of natives. It delivers results according to one’s Karma or actions, i.e. good actions lead to favourable results, whereas malicious acts can result in unfavourable outcomes.

Speak With World’s Best Astrologers On Call & Know Everything About Saturn & Its Impact On Career, Finance, Health Etc.

Saturn is the ruling lord of Aquarius and Capricorn zodiac signs. Known as a cruel planet, Shani Dev dons a dark complexion and has a Vulture as his mount. It is said that anyone who worships Lord Shani with a devoted heart attains his blessings. So let’s move ahead and read in detail the Puja rituals, the significance of this day, and ways to please him.

250+ Pages Personalised AstroSage Brihat Horoscope Throws Light On Various Aspects Of Your Life Due To Impact Of Saturn!

According to the Purnimant Panchang, Shani Jayanti is celebrated on the Amavasya Tithi in the Jyestha month.

Ask Any Question: We Will Address All Your Concerns

According to religious beliefs, Shani Dev was born on the New Moon Day or Amavasya tithi of Jyestha month. In Vedic astrology, Shani Dev or Saturn is considered to be the benefactor of Karma or actions and justice. On the auspicious day of Shani Jayanti, a flock of devotees can be seen swarming across major Shani temples, performing Shani puja rituals and praying for a blissful life. One attains the outcome of his/her actions as per his/her intentions. Anyone performing good deeds does not have to face the wrath of Shani. However, in view of the nationwide epidemic, we would advise you to avoid going to public places. Perform all religious activities like puja etc. at homes and do not invite people.

How Lord Shani Was Born?

There are different beliefs and stories regarding the birth of Shani Dev. According to a legend, Shani Maharaj is the son of Lord Surya and his wife Chhaya. Surya Dev was married to Sangya, the daughter of King Daksha. Sangya stayed with Lord Sun for a few years after their marriage, but couldn’t bear his bright glorious light for much long. Because of this, Sangya left her Chhaya or shadow with Lord Surya and went to perform the penance herself. After some time, Chhaya gave birth to Shani Dev.

Why Is Saturn Hailed As The Best Amongst Navagrahas?

According to the religious scriptures, the mother of Lord Shani Chaaya performed a harsh penance to appease Lord Shiva while nurturing Lord Shani in her womb. Due to her mother being pregnant, Lord Shani had to face the severe after-effects of the penance, resulting in his complexion turning black.

Seeing his dark complexion, Lord Surya refused to consider Shani as his son. Angered by his father’s insult, Shani Dev performed the harsh penance to please Lord Shiva. Seeing his sincerity, Lord Shiva blessed him and placed him as the “Best” amongst all the Navagrahas. Not only humans but gods will also fear your name.

Tips To Appease Saturn or Shani

In order to venerate Lord Shani, the day of Saturday is usually considered an ideal day. In Hinduism, several remedies are carried out to please Shani Dev. let us shed light on some of them:

Before performing the above remedies, you are advised to get your personalized Shani Report. Through this report, you will get a detailed insight into the favourable and unfavourable influence on Lord Shani in your life.