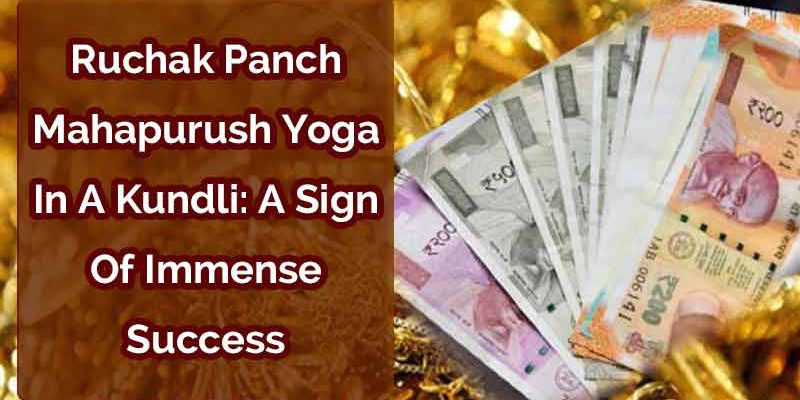 Everyone wants to live a royal life and get blessed with the presence of Raj Yoga in their kundli. It is actually an astrological conjunction formed by the exclusive placement of planets which blesses one with all kinds of prosperity and happiness in life. On this note, AstroSage has come up with an opportunity to get a detailed insight about the formation of such yogas in your kundli by rolling out the “AstroSage Super Summer Sale”. Find out best deals and offers on such astrology reports and find out what’s in store for you.

In ancient times, the kundlis of the Kings were analysed, and based on the evaluation, discoveries such as which king is more powerful than the other, more capable and successful in attaining the highest level of fame and love from his subjects. The presence of Raj Yogas in their kundlis played a major role since its formation in a kundli can make one reach the heights of success.

This second verse or shloka of Brihajatakam’s Aashraya Phaladhyaya sheds light on the Raja Yoga formed in a kundli. According to it, if a planet is in its highly exalted state and being aspected by its friendly planets, the chances of Raj Yoga forming are high. In such a situation, that native attains immense wealth and becomes prosperous. If the planet is posited in an inimical sign, then that native can be devoid of wealth, comforts and good health, can become doubtful, troublesome, can suffer a lot, face humiliation, can become sinful and inferior. That is, if the exalted sign is in a strong position and being aspected by friendly planets, the native is bound to attain prosperous results and lead a royal life.

Today, in this article, we will discuss one such Raja Yoga, which is capable of eradicating all kinds of sorrows and obstacles and blesses one with prosperity, might, fearless and immense wealth.

What is Ruchak Panch Mahapurush Yoga?

The above verse of Jataka Parijat states that if Mars, Mercury, Jupiter, Venus and Saturn are in their exalted sign, Mool Trikona sign or own sign and placed in the Kendra or Angular house from the Lagna, then the Mahapurush Yoga is formed. Mars is responsible for Ruchak, Mercury for Bhadra, Jupiter for Hansa, Venus for Malavya and Saturn for Shash Yoga. Out of these, today we will only talk about Ruchak Yoga.

Ruchak Panch Mahapurush Yoga is created by Mars. This yoga is formed when Mars is either in its exalted zodiac sign Capricorn, Mool Trikona sign Aries or its own sign Scorpio in the Kendra or Angular house of the kundli.

According to the Manasagari, if Mars is in the Kendra from the Lagna and positioned in its exalted or own sign, only then that the Ruchak Panch Mahapurush Yoga is formed. But if Sun or Moon are situated with Mars, then the great Mahapurush Yoga gets cancelled. Therefore, one fails to attain the fruitful results as well.

One can find out more about this Mahapurush Yoga in the chapter 24 of the Saravali and in the 68th chapter of the Panch Manush Vibhagadhyaya of the Brihat Samhita, which is composed by Varah Mihir ji. You can also find out more about the formation of several Raj Yogas in your kundli through your personalised Raj Yoga Report.

Just like the name, Panch Mahapurush Yoga offers magnificence and grandeur in the lives of natives, thus making him/her a “Great Human” or “Maha Purush”. Such a person encounters no harm in his/her life, flies high and becomes popular. Any native having Ruchak Panch Mahapurush Yoga in his/her kundli lives a special and extraordinary life. He/She doesn’t feel scared to face the upcoming challenges in his/her life but faces them bravely. Such a person leaves all of his/her struggles behind and moves forward in life. All of this is attained by the grace of the planet Mars because Mars has been entitled as the Senapati or Commander of the Navagrahas and known to be a source of energy in life.

A person born in Ruchak Panch Mahapurush Yoga is blessed with a strong physical build and blessed by Maa Lakshmi. This means he/she faces no such shortage of money and takes good care of his/her body. His/Her body exhibits a radiant energy, and he seems proficient in chanting and reciting mantras. Also, such a person possesses a good character, lives a king-size life full of leisure and comforts and behaves nicely with people. He/She is successful, impresses everyone with his/her well-sculpted, soft body and succeeds in dominating his/her opponents. Any native blessed with the presence of Ruchak Panch Mahapurush Yoga faces his/her opponents bravely as well as the challenges and obstacles coming in way. One of the main qualities of such a native is that when the situations demand, he/she can renounce the workday pleasures or necessities. Such individuals attain longevity and enjoy all kinds of pleasures in life.

The below mentioned Shlika is significant when we talk about Ruchak Panch Mahapurush Yoga:

If we look at this verse, we can find out that the native becomes physically strong if the Ruchak Panch Mahapurush Yoga is present in his/her kundli. Such a native possesses an energetic and powerful personality, good nature and commendable character. She/He attains immense fame and popularity, gets blessed with wealth and materialistic pleasures and immensely skilled in chanting or reciting mantras. Their opponents encounter no chance to stand in front of them. Such a person seems to be patriotic and love his/country to bits. She/He is influential and keeps a hold on her/his life, which helps her/him establish a different image of her/himself.

It is worth noting here that the formation of this yoga in the birth chart determines its effect, but if Mars is posited in a debilitated or inflicted state in the Navamsha or Varga Kundli, then the native fails to attain full results of this Yoga. Any planet behind the formation of Raj Yoga in a kundli definitely marks an impact when undergoing its Dasha or Antardasha. On the other hand, whenever such a planet undergoes its Mahadasha or any benefic planet undergoes Antardasha or Pratyantar dasha in its Mahadasha, then such a native gets blessed with benefits and leisure. Raj Yoga Report sheds light on such planetary dashas in your birth chart and reveals their impact on your life.

Let us focus on the Ruchak Panch Mahapurush Yoga forming in one’s kundli, and know how to identify its presence. Below is such an example: 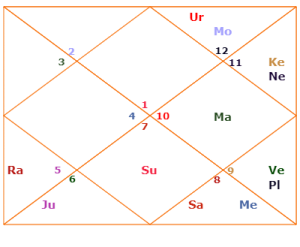 This horoscope belongs to the Aries ascendant, whose lord is Mars and placed in the Kendra or Angular house, i.e. tenth house, from Lagna with its exalted sign Capricorn. In this manner, a powerful Ruchak Panch Mahapurush Yoga is forming. The planet Mars placed here will make the native dedicated and hard-working.

In this way, one can understand the kind of impact Ruchak Panch Mahapurush Yoga has on one’s life. AstroSage Super Summer Sale gives you a golden chance to know more about other Yogas, Doshas and planetary changes in your kundli and find out reliable answers to your questions. Tune in now!

We hope that you will appreciate this blog of ours. Thank you so much for connecting with us. Stay safe and healthy!!!