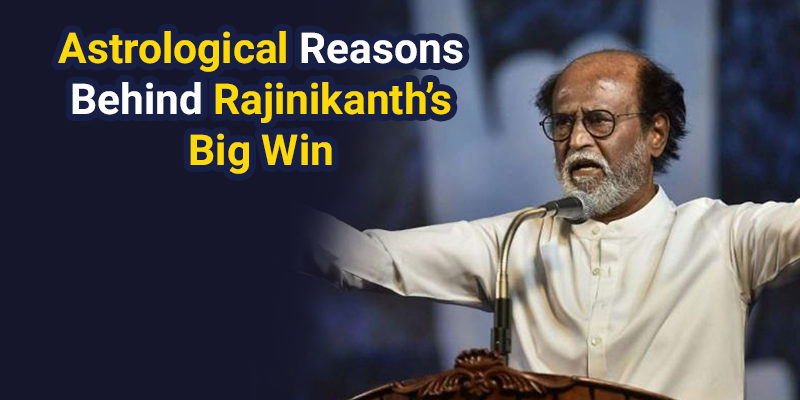 Superstar Rajinikanth is all set to receive the Dadasaheb Phalke Award this year. This news has brought a wave of happiness and excitement among the people residing in Chennai as well as other parts of India. With such a major fan following, Thalaiva Rajinikanth has not only wooed his fans with cinematic works but philanthropic works and initiatives as well. On this note, our esteemed astrologer Acharya Raman Ji has carried out an astrological analysis based on his kundli and revealed the position of planets and nakshatras that led to this major achievement.

Astrological Reasons Behind This Felicitation

What were the astrological reasons which made Rajinikanth get this award? Let us find out.

If we see his horoscope, we will see that presently he is running the mahadasha of Mercury and the Antara is of Ketu, for his ascendant Mercury is ruling the most beneficial houses 2-11. Ketu is placed in the first bhava in the KP horoscope and it is in the star of the Sun and in the sub of Rahu. Rahu is in the 7th bhava and in the star of Jupiter. Ketu is in the sign of Mercury and conjuncts with Saturn. Rahu is in the Jupiter sign and Jupiter aspects the lagna.

His 5th cusp sub lord is Jupiter ruler of the 5th house placed in the 6th house and in the star and sub of Rahu and in the sub-sub of Moon in the 5th. No wonder he is such a famous personality.

Ketu is transiting in the Mars sign and is also aspected by Mars. Mars is conjoined with Rahu. The elevation is seen from the 10th house and the transiting planets of his horoscope are positive for this reward as they are strongly connected with the 10th house.

Future Prospects For The Superstar Rajinikanth

Ketu Antara will be over in June. He is also going to join politics as per the latest news articles. His Venus Antara is going to start from June till April 2024. Venus is in the 4th house in the star of Ketu and in the sub of the Moon. He is going to rise in politics too not only from June but the time is ripe now itself.

He is a well known humanitarian and a simple human being who does not likes to show off, he has a following like madness, he is going to succeed in politics too just like he has done in the movie industry and will do many good deeds in the time to come.

Wish him lots of love and luck.

Talk to Acharya Raman on call and know everything in the context of finance, career, love and married life.

Thank you for connecting with AstroSage