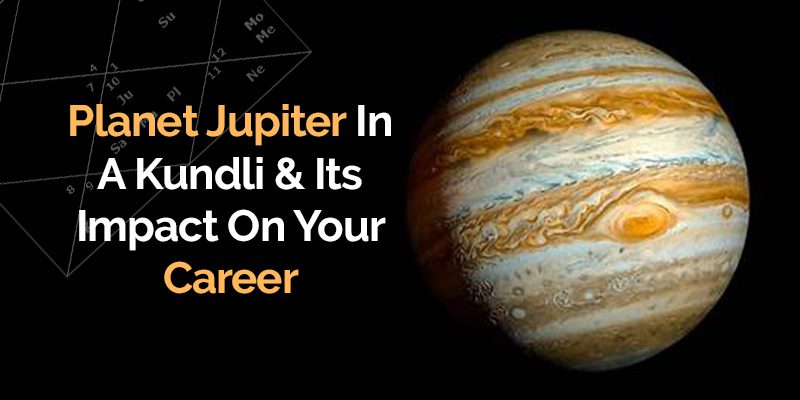 Amongst all planets, Jupiter is known to be the heaviest and massive. The presence of the planet Jupiter in various houses of a native’s kundli can incur both favourable as well as unfavourable outcomes. Being the benefactor of progress, this planet is considered to be highly influential for any native. In such a state, read this article to know how its presence in different houses of a kundli impacts your career and professional life. You can also seek the help of CogniAstro Career Counselling Report before making any career-related decision.

On the basis of astrology, the complexion of Jupiter is said to be yellow, but the eyes and hair are somewhat brown in color. It is considered to be the most powerful and extremely auspicious among all the planets. It embodies a gentle approach and is said to be the provider of wealth and knowledge for human beings. Entitled as the “God” of the Devtas, it is a binomial planet symbolizing justice and religion, known as a Great Pundit with a great build, wheatish complexion, big belly and clever mind, possesses Sattvic characteristics with a philanthropic sense and represents the Air element.

Jupiter takes about thirteen months to move around the Zodiac Belt, i.e. transit through the zodiac signs. Apart from this, it rules over the Sagittarius and Pisces zodiac sign. Also, Jupiter remains exalted in Cancer and debilitated in Capricorn. According to mythological scriptures and Vedic Astrology, Sun, Mars and Moon are considered friendly to Jupiter, while Mercury and Venus are said to be inimical. However, Saturn and Jupiter share a neutral relationship.

Planet Jupiter In The First House

With Jupiter in the first house of one’s kundli, he/she is expected to rise and become rich. Such a native achieves great progress in business through his/her own efforts and attains benefits through government networks. He/She earns his/her livelihood by carrying our social work with the help of his/her intelligence.

Planet Jupiter In The Second House

If Jupiter is in the second house of the kundli, then the native becomes a poet. He/She attains the power to govern a state. Such a native gets engaged in business related to  gold jewelry and manages business based abroad or has foreign connections. He/She gains success in the advocacy and legal sector as a judge. Additionally, it also makes you a skilled administrative officer.

Planet Jupiter In The Third House

Any native who has Jupiter in the third house of his/her kundli creates his/her own destiny with hard work and dedication. With this, carrying out their own work will incur major benefits and progress. The best occupation for the native who has Jupiter in his/her third house can be Teaching. Such natives attain respect and honor from the government and can also work in the government sector as well. You can also benefit through your intellectual writings.

Planet Jupiter In The Fourth House

A native carries out tasks associated with writing, immigration services, healing, tourism, foreign lands etc. if the planet Jupiter is placed in the fourth house of his/her kundli. Jupiter in the fourth house incurs favourable results. Such a native gains wealth and riches, and attains prosperity and good income by getting associated with the government sector. If in politics, such a native attains a high position.

Planet Jupiter In The Fifth House

Jupiter in the fifth house makes the native a good, fluent speaker (media) and a skilled lecturer. Such natives can become excellent writers or authors later in life. Often such people work in the Media sector and enjoy materialistic comforts in life through the income earned. They carry out social work effectively with others.

Planet Jupiter In The Sixth House

If the planet Jupiter is in the sixth house of one’s horoscope, then such a person is often debt-ridden. Such natives achieve success by joining hands with the maternal side of the family and planning a new business strategy. Also, one advances in the field of advocacy and becomes a good lawyer. Such natives should pursue legal work.

Planet Jupiter In The Seventh House

With Jupiter in the seventh house of the kundli, a native becomes intellectually superior. Such a person is fortunate, meek and patient and actively participates in religious and spiritual activities. Such a native can join the Information Department in the government sector after marriage or expands his/her own business. Also, he/she remains active socially.

Planet Jupiter In The Eighth House

If a native has Jupiter in the eighth house of the kundli, then that native becomes more attracted towards secret activities and tasks. He/She shows interest in befriending such people as well. Such activities can include theft, robbery, secret jobs etc. Also, such a person can develop an interest in gaining Tantric knowledge and succeed as well.

Planet Jupiter In The Ninth House

One attains a higher position at his/her workplace if the planet Jupiter is in the ninth house of his/her kundli. Such a person can be very affectionate towards his/her siblings and is widely loved by its subjects. The ninth house of a kundli gets particularly influenced by Jupiter, hence such a native is most likely to become famous. The native becomes an honest person and dedicated officer.

Planet Jupiter In The Tenth House

If Jupiter is in the tenth house of one’s kundli, such a native becomes the owner of the land or building. He/She carries out work related to the land, is highly skilled in painting and enjoys fruitful results. Such people find solace in serving the poor and joining an NGO, which can at times become the main source of their livelihood.

Planet Jupiter In The Eleventh House

With Guru or Jupiter in the eleventh house of the kundli, the native becomes rich, takes over his/her father’s business, plans strategies for initiating new ventures and carries out religious works. Such a person prefers working with a wise and knowledgeable person.

Are Riches A Part Of Your Kundli? Know With Raj Yoga Report

Planet Jupiter In The Twelfth House

With Jupiter in the twelfth house (house of expenditure), inauspicious results are likely to be obtained. Due to the influence of Jupiter on this house, the native gets humiliated in the society. He/She is lazy and can earn his/her livelihood as a low-level worker. In case Jupiter is judiciously placed, such a native attains success in the field of editing, is frugal, and has a philanthropist side to him/her along with being wicked and extremely greedy.

Thus, based on the above discussion, it can be said that the planet Guru or Jupiter majorly influences your lifestyle. This is a generalised prediction. For detailed predictions, Desh-Kaal-Patra is also analysed and evaluated.

You can also read: