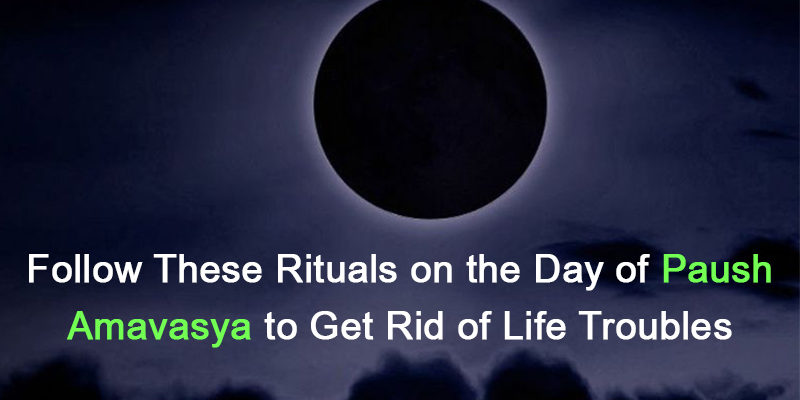 As per the Hindu Panchang, the last date of Paush month in Krishna Paksha is known as Pausha Amavasya. Amavasya Tithi holds high significance in Hinduism because many religious works are carried out on this very day. The tradition of performing Shradh or Tarpan has been followed on this very day. Not only this, many people observe fast and perform worship to get rid of Pitra Dosha and Kaal Sarpa Dosha. Venerating Lord Sun holds high significance during Paush month.

Paush month is considered to be the best for religious and spiritual thinking. Along with the fast, some religious rituals are also carried out on the day of Amavasya of Paush month. So, let us know about all that.

2.  On this day, pour water in a copper vessel and add red flowers, red sandalwood (Chandan) and offer it to Lord Sun.

4.  Those who are having Pitra Dosha and childless Yoga in their horoscope, are suggested to observe the fast of Paush Amavasya and perform Tarpan of their forefathers.

5.  The tradition of worshipping Peepal tree and revolving around Tulsi plant has been followed on the day of Amavasya.

6.  It is also believed that the fast gives peace to the souls of forefathers. Also, one is blessed with the fulfillment of rare wishes and gets rid of Doshas in horoscope.

The significance of worshipping on all Amavasya Tithis is well known in Hinduism and Paush Amavasya is considered to be highly fruitful amongst all of them. It is believed that this auspicious month is considered to be the best for religious and spiritual thinking. This fast not only pacifies the soul of forefathers but also pleases Brahma, Indra, Surya, Agni, Vayu, Rishi etc.

How to Get Rid of Pitra Dosha on this Amavasya?

This Amavasya is going to fall on January 13, Wednesday. In this regard, after taking a bath in Ganga, offering water in the names of ancestors gives peace to their souls. As per this belief, on the day of Mauni Amavasya, there is a great importance of doing Pind Daan at holy places.

Perform these Things on the Day of Paush Amavasya

Get solutions for all your problems related to finances: Finance Report

Usually, the day of Paush Amavasya is considered to be sacred in Shastras but you will be surprised to know that this day also helps in getting rid of several kinds of Doshas. Whosoever person has Kaal Sarpa Dosha in horoscope, he/she can get rid of the same by performing some the following rituals.

Things to be Avoided on Amavasya

The night of Amavasya observes absolute darkness in the sky. In this pretext, inauspicious activities, negative vibes, ghosts, witchcraft etc. remain highly active. Therefore, a person is advised not to pass by an isolated place. Wake up early in the morning and take a bath on the day of Amavasya and offer water to the Sun. Sleeping for a long time is considered to be inauspicious. Do not disrespect anyone on this very day. Also, avoid non vegetarian food and consumption of alcohol on the same day.