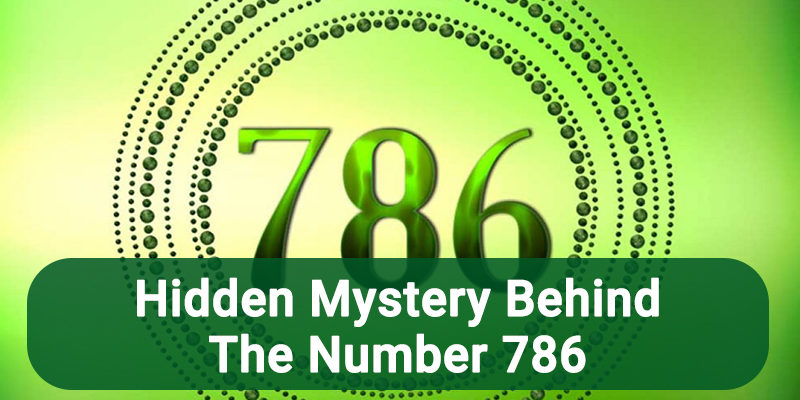 What comes to your mind when you look at the number 786? Mathematics? Money? Luck, Good Fortune? Islamic Number? Or just mere numbers?

786 is probably the most important mystical number around the globe. Irrespective of which religion you belong to, most of the people consider this number to be ‘Holy’ or ‘Lucky’. Till today we have a perception that the number belongs to the Muslim communities alone, But did you know that number 786 is related to Hindusim and Christianity as well. Let’s throw some light on the significance of this number for various religions.

The number 786 in Islam is used to signify the name ‘ALLAH’ ‘The ever Merciful, The ever Compassionate. The origin of 786 is believed to be a shorter or numeric form of the Arabic letter of the opening phrase of the Quran “BISMILLAH AR-RAHMAN AR-RAHEEM” which adds up to the numerical value 786. The Arabic letters are arranged in two ways, first is the most common method that is the alphabetical order viz-a-viz Alif, ba, ta, the. Alif always comes as the first letter.

The other method for calculation in Islam is called Abjad where arithmetic values are assigned to each letter starting from 1 to 1K. The Abjad method gained immense popularity within Indian and Pakistani Muslims as, adding together the numerical value of the letters“BISMILLAHIR-RAHMANIR-RAHEEM ‘‘further breaking them down we will arrive at the total of 786. Therefore, this number is used by some Muslims in India and Pakistan to substitute ‘Bismillah’ aka ‘Allah’. The method is followed in order to avoid writing holy names on any ordinary paper. This practice started much later and not at the time of the Prophet, therefore some devotees and orthodox Muslims do not practice and condemn it by saying that some numerical value cannot equate the holy name of ‘Allah’.

Hinduism has a prolonged connection with the number 786. According to numerology, you will also find that the total of 786 comes as 7+8+6 = 21 which is represented as a holy number and if we further add 2+1=3. As we all know number 3 is believed to be the most common and auspicious number amongst all religions. It is also said that number 3 brings good luck and fortune in all aspects. In fact, in Sanatan Dharma it is always believed that there are three Lokas, Swarg Lok, Prithvi Lok and Patal Lok and it is said that Swarg Lok (Heaven) is related to number 7, Prithvi Lok (Earth) is related to number 8 and Patal Lok (Hell) is related to number 6 which when combined becomes 786.

The word ‘OM’ refers to the Atma (soul, self within) and Brahmand (the universe). The syllable is often used at the beginning and the end of chapters in the Vedas, the Upanishads and other Hindi texts. Now if we see Urdu is written from right to left and Sanskrit is written left to right so when we write 786 in Devanagari and we carefully observe we will see a mirror image of Om which when combined can be interpreted as Om or 786.

The words in the Hebrew Bible have a Gematria, a Jewish form of numerology, in which the letters of the Hebrew alphabet are substitute with corresponding numbers. With this calculation 786 = ישועת Yeshuat = Salvation and 786 = תושעי Tosh’aai = To Save. All biblical Hebrew words with the gematria of 786 amounts to 50 words. The most frequent words by far are forms of the word denoting salvation (being saved from the power of evil) and save. The number 786 is the name of Salvation in Hebrew- the name of JESUS who is the ultimate protector and disposition of Salvation from evil. The total of 786 adds up to a 21 which is considered auspicious in the Bible. As it is mentioned in the Bible that in the womb of a mother it takes 21 days to form a pineal gland, which is the same point where third eye chakra is indicated,  where human consciousness lies.

We, therefore, can conclude that no matter what religion one belongs to,  the number can be considered as holy and lucky for one and all.

Symbol of Good Fortune and Health

Certain numbers are said to radiate positive energy when used in an appropriate manner, 786 is believed to be one of them as this number is related to luck and prosperity, Hence it is widely used to put on houses, vehicles, people especially Muslims use this number on wedding cards, people buy lottery tickets with this number. Even the currency notes having 7-8-6 numbers are considered as a prized possession which is either treasured for luck and prosperity or sold at a premium price.

The obsession of Bollywood with this number is very well known to us as it has been used over and over again. Remember Amitabh Bachaan wearing ‘Billa No 786’ in the movie Coolie. Shahrukh Khan’s famous ‘Kaidi no 786’ in the movie Veer Zaara. Khiladi 786 in which actor Akshay Kumar apparently has 786 on the destiny line of his palm. The list does not end here and goes on as there are many more movie directors who have minted money by the application of this spiritual number.

What happens when you come across the number 786?

Sometimes it happens with people that they see a particular number multiple times in the past week or months. Initially, on seeing such numbers repeatedly we tend to ignore it but with repeated visuals, we start to wonder whether our destiny is trying to send some kind of a signal to us. So, if you see 786 your angels want you to assure that the divine realm is ready to shower some love, affection, guidance and protection to you. Additionally, angel number 786 draws your attention to the many blessings that have been sent your way and that you are more blessed than an average person.

Isn’t it great! So next time you come across the number 786 remember that you have been blessed by the divine power.

To Connect With Kriti Bhargava For Astrology Guidance On Call Anytime, CLICK NOW

If you see Angel number 786 it means you are showered with the blessing, protection and guidance of the gods.

There is a very interesting connection between OM and 786 as the magical number when written in Sanskrit becomes the reflection of Om.

Q3. What religion is the OM Symbol?

The currency with serial number 786 is collected by many people all over the world as it is considered as the symbol of luck and prosperity, it also bought and sold online.

Most of the people all over the world consider this number lucky and use it in their life as a lucky charm in the form of currency, house number, or vehicle number.