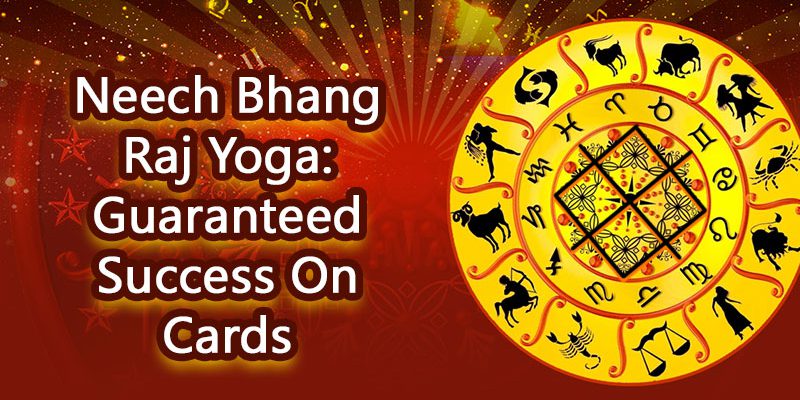 Neech Bhang Raj Yoga, as per Vedic Astrology, is a strong Raj Yoga which, if present in a native’s kundli, helps a person fight against adverse conditions and come out as a winner and showers him/her with incomparable wealth like a King.

In the present times, the Neech Bhang Raj Yoga is said to be quite an influential yoga, whose impact is clearly visible. It is often the case that the presence of any planet in a debilitated sign in a native’s kundli is regarded as an inflicting planet. However, instead of jumping to conclusions, one must evaluate the whole kundli and check if that planet present is churning out feeble outcomes as a result of being in a debilitated state or creating a Raj Yoga. It is possible in that situation when the impact of that planet transforms into a state of Neech Bhang Raj Yoga.

What is Neech Bhang Raj Yoga?

According to Vedic Astrology, the Neech Bhang Raj Yoga is a strong and influential Raj Yoga that makes a person capable and well-dependent. With this, the natives surpass all kinds of challenges in life through his/her actions and heads towards the path of success in life. As the name itself suggests, a planet in a debilitated state in a kundli is the first mandatory condition for Neech Bhang Raj Yoga to form.

Each planet remains in a constant state of change, therefore before going ahead, we need to understand when a planet remains in a debilitated state. According to astrology, each planet has its own phases, where it remains in the exalted sign, Mool Trikona sign, in its own sign, in its friendly sign, neutral sign, inimical sign and debilitated sign. For every planet, these signs vary. As per Vedic Astrology, any planet becomes stronger when placed in the exalted sign, slightly less powerful when in the Mooltrikona sign, less impactful in its own sign, and thus in the same order becomes weaker in the debilitated sign. With this, its tendency to offer auspicious results instead of auspicious increases.

An exalted zodiac sign means that the planet is located at a higher point from where it casts a strong impact on human life. On the other hand, a debilitated sign means the point from human life is least impacted by that planet. In this way, if the planet becomes highly exalted in a specific sign, then on the other hand, it will be highly debilitated in the seventh sign from its exaltation point.

To understand these planetary states, you can study the following table:

Thus, according to the above table, planets and their exaltation and debilitation signs can be easily understood. For example, if the Sun is in an exalted state in Aries, it will be considered debilitated in the seventh sign, i.e. Libra. For Neech Bhang Raj Yoga to be formed, any planet in a kundli is required to be in its debilitated sign.

If a planet is located in its debilitated sign in the horoscope, it is considered to give out inauspicious results. But if the debilitation status of that planet gets cancelled, i.e. Neech Bhang Raj Yoga is formed, then that planet proposes favourable outcomes. This is itself one of the features of Neech Bhang Raj Yoga. Under what circumstances this can happen, we can find out based on the information and rules given above.

The formation of Raj Yoga in one’s horoscope is considered an important astrological occurrence. The more the number of Raj Yoga in one’s kundli in a strong state, the standard of living of that native elevates, and he/she gains fame, great success, prosperity, wealth and much more. Talking about the results obtained from Neech Bhang Raj Yoga, anyone who is born with this yoga enjoys affluence and various kinds of pleasures after an initial phase full of obstacles and struggles. You live a king-like life, and enjoy a constant flow of wealth. If the planets creating Neech Bhang Raj Yoga undergo Mahadasha or Antardasha in the birth chart of a native at the right time, then he/she experiences no such delays in enjoying opulence and achieves all the successes in life.

You can understand that in the present time, the Neech Bhang Raj Yoga offers more fruitful results than the normal Raj Yogas, but natives with this Yoga do not lead a normal life. This means that they are not blessed with luxuries but have to work harder in order to succeed in life. Since Neech Bhang Raj Yoga means the cancellation of debilitated planets in one’s kundli, this means that even though obstacles will dominate the initial stages of such a native, he/she will emerge victorious amidst those struggles and recognize life values.

In fact, it can be understood that the natives who have Neech Bhang Raj Yoga in their birth charts make a name for themselves on their own. Such a person leaves his/her own indelible mark, and their ability to never fall back and great deeds make them an inspiring individual. Whether the time is favourable or unfavourable for them, success is guaranteed. Such a person enjoys great respect in his/her family and society. He/She successfully defeats his opponents, possesses a great power to face challenges, enjoys all kinds of pleasures and is most likely to enjoy fame.

To help you understand better, we are providing you with some examples of kundlis that possess the Neech Bhang Raj Yoga. understand how it is formed. 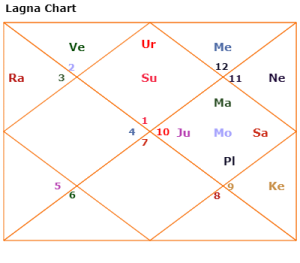 Take a look at another kundli to get a better understanding about Neech Bhang Raj Yoga: 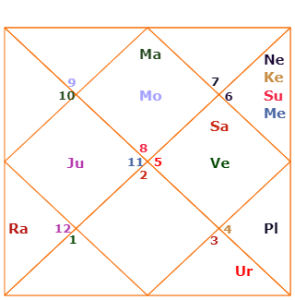 In Kundli-2 above, you will see that the kundli is of Scorpio Ascendant where the planet Moon is in its debilitated sign Scorpio. However, it is astonishing to see that the ruling planet of that sign Mars is placed in the Kendra from the Moon, i.e. the first house. Hence, the Neech Bhang Raj Yoga is formed. This is the horoscope of the current Prime Minister of our country, Shri Narendra Modi. You all are well-aware of the initial struggles faced by Modiji in the beginning of his life and how apart from being the Prime Minister of the country, he is counted as one of the global leaders of all time. Neech Bhang Raj Yoga is behind all these wonders.

Let’s go ahead on the same lines and take a look at another kundli: 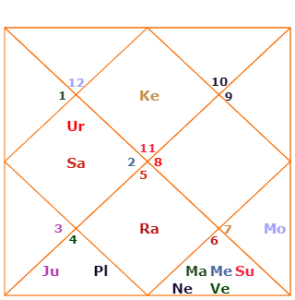 The above horoscope is of Aquarius Ascendant, in which the planet Venus is posited in the debilitated sign Virgo in the eighth house. But the planet Mercury is also present in the same house in its exalted sign Virgo. Therefore, two planets are posited in an exalted and debilitated state respectively in the same sign, which is leading to the formation of Neech Bhang Raj Yoga. You will be surprised to know that this is the horoscope of Amitabh Bachchan, the greatest actor and legend of our Indian Film Industry. Even his life was not a cakewalk, and he had to suffer a lot to reach where he is now and work harder than others in order to prove his worth.

When will your luck shine? Raj Yoga Report reveals it all!

We hope that you will appreciate this blog of ours. Thank you so much for connecting with us. Stay safe and stay healthy!!!