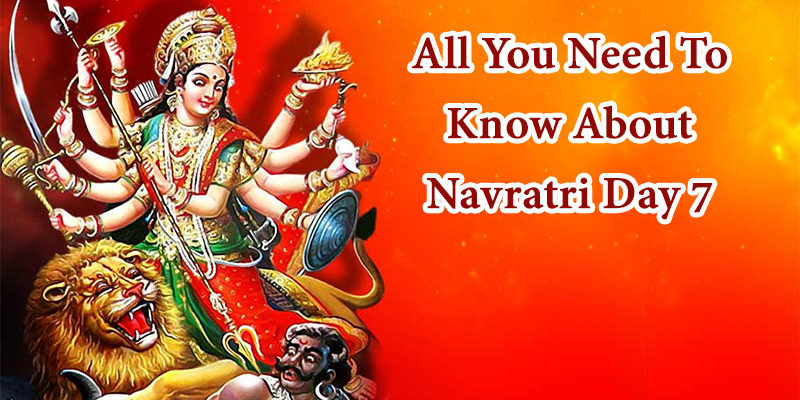 The Navratri festival continues, and today is the seventh day, also known as Saptami. This day is dedicated to the worship of Goddess Kaalratri, one of the fiercest forms of Goddess Durga. Kaal means time, Ratri means night. As per our ancient Scriptures, Goddess Parvati gave her golden Avtar to kill the Asuras shumbha- Nishumbha, and from that day, she was known as Goddess Kaalratri.

She is described as the one with four arms, of which the top right hand is in Varada mudra, and the bottom hand is in Abhaya Mudra, while the upper hand on the left side has an iron fork and the lower hand has a Khadag. The vehicle or Vahana of the goddess is a donkey.

Goddess Kaalratri is also known as Goddess Kali, who is another form of Shakti. Other names that are used for her include Raudri and Dhumona. She is also known to bless her worshippers with knowledge and wealth.

Kaalratri  puja is done on Saptami, and for this, a photo of the goddess is kept near the Kalash, and Mantras or the Saptashati are recited. Flowers such as Jasmine, Chrysanthemum and Hibiscus are used for puja. The goddess is offered Gur ( jaggery) and water as Bhog. Sweets and fruits are also kept along with it. Lord Shiva and Brahma are also worshipped during the puja. Finally, the aarti is done, and the prasad is distributed. During Navratri, which is a nine-day celebration, different forms of the goddess are worshipped.

Saptami : Importance of the Day

The seventh Tithi of the Navratri festival is celebrated as Maha Saptami. This day of Saptami holds excellent importance as devotees worship God as Durga to seek her divine blessings. During all nine days of Navratri, devotees worship the power and incarnation of Goddess Durga across India.

What are the rituals of Saptami?

Kalaratri puja is performed on Saptami Tithi to appease the seventh avatar of Goddess Durga. According to Hindu mythology, people offer jaggery to Goddess Durga on Saptami, and it is believed that she protects her true devotees from evil spirits and power.

On Saptami or the seventh Tithi, Goddess Kaalratri is worshipped and blessed her true devotees with protection from the evil spirits and powers. She served jaggery as prasad on the day.

It is said that God has the ownership of Pingala Nadi, and She has the power to give blessings in the form of siddhis to her devotees. She also has the ability to look into the future, and by worshipping her, all the negative energy swades away, and as a blessing, Kaalratri also blesses her devotees with salvation.

Her favourite flower is the chrysanthemum, one should offer 108 chrysanthemum flower garlands, by doing this Maalaratri gets immense pleasure and happiness.

What to Eat and Wear on Saptami Tithi

Day of Saptami is dedicated to Maa Kaalratri, a special day for tantriks:

The seventh avatar of Maa Durga, i.e. Maa kalratri will be worshiped in Mool Nakshatra. The incarnation of Maa kalratri is very fearful. Ghosts, demons all tremble from the goddess. It is said that worshiping Maa Kalratri will remove all the obstacles of the devotees. Devotees will have no fear of fire and water, if the devotees follow all the rules and rituals and worship Maa Kalratri. Their wishes are automatically fulfilled. Tantriks do special puja on this day. The Tantra done on this day is proven to be fruitful for them. Along with Maa kalratri, they worship Shiva and Brahma as well. In many places, liquor is also offered to Goddess Kalratri.

Rituals for the Night

Nisha puja is performed on Saptami Tithi night. Devotees following the Tantrik/esoteric path also offer alcohol and Siddhi to the Goddess. However, it is advised that this puja is best done under the guidance of an Aghori Tantrik. Devotees usually perform the shringar puja on Saptami night. They offer sindoor, kajal, comb, hair oil, shampoo, nail paint, lipstick and two sets of all products typically used in makeup. One set of the products is later donated to temples, while devotees use the other set as a form of prasad.

Navratri 2021: Remedies to do on Saptami Tithi

Every person wants to have wealth, happiness, prosperity, splendour, and a desired life partner in his/her life. He also makes many efforts to get these things, but it is said that a person brings nothing before time and if luck is not on his side. But doing Remedies on Saptami Tithi will bless you with the fulfilment of your wishes by the blessings of Goddess Kaal Ratri. Doing some Totkas on this day may fulfil all your desires. Cloves are one of the best tools to perform remedies with . Diwali or at the time of Surya or Chandra Grahan and gives favourable results too.