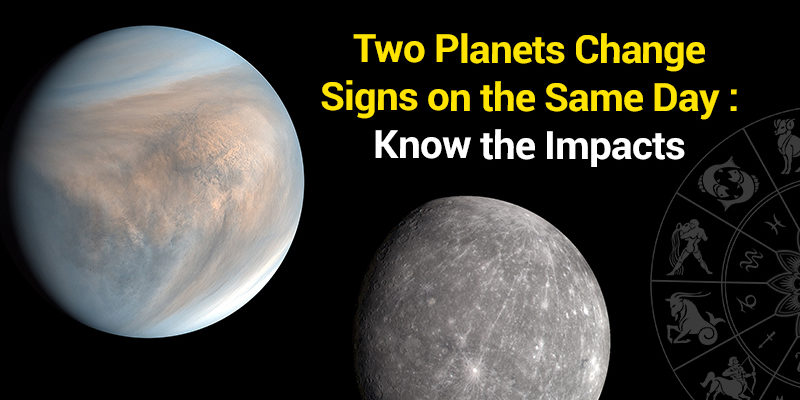 In the realm of Vedic astrology, the transit and retrograde movements of planets hold a special significance. If we talk about this in layman’s terms, then the transit in general refers to the procedure when planets change their zodiacs and move from one sign into another.

But it should also be kept in mind that the movements of planets sometimes take place in a retrograde motion and other times in a direct motion. The term retrograde refers to the reverse motion a planet seems to undertake during its course of action and ‘direct’ as the word implies refers to the direct motion of the planets.

How can we miss out that the transit and the retrograde motion of planets have been given special importance in the world of astrology. On this note, we would like our readers to know that during the month of October, and to be precise on Saturday, October 02, two planets are going to change their zodiac signs. Out of these, Venus will transit in Scorpio and other is Mercury transiting in Virgo in retrograde motion.

Talk To World’s Best & Learned Astrologers On Call & Know Everything About these planetary movements!

Naturally, these major changes in movements of two crucial planets in a span of one single day will definitely affect the country, the world and the lives of the general public.

Hence, keep reading this blog of ours till the very end to find out what will be the effect of these two important planets on the country, world and you. Also, collect some significant trivia related to the transit of Venus and retrograde Mercury

If we talk about the planet Venus, then according to Vedic astrology, it is given the status of an auspicious planet. The planet Venus is considered to be the significator of art, love, beauty, married life, vehicles, material pleasures, etc. A person in whose horoscope Venus resides in an auspicious position becomes worthy of possessing the worldly pleasures. On the other hand, people who have Venus situated in an inauspicious position in their horoscope or Kundli, face many kinds of problems in their  married life, their worldly pleasures start decreasing and also marks a degradation in their financial condition.

250+ Pages Personalised AstroSage Brihat Horoscope For All Possible Solutions To Your Problems!

Things to Keep in Mind About Venus

If we talk about the mythological beliefs associated with the planet Venus, then it is known as ‘Daitya-Guru’ or the mentor of demons in the realm of Hindu mythology. .

As per mythology, the most prevalent name of Venus is Shukracharya, who was also a solid devotee  of Lord Shiva.

Shukra is the son of Maharishi Bhrigu.

Apart from this, all Fridays in the week are dedicated to the planet Venus. In such a situation, one can appease the planet Venus by observing fasts and carrying out the necessary remedies.

Hidden in the big horoscope, all the secrets of your life, know the full account of the movement of the planets

Moving on, let us talk about this transit whose total duration will be for 23 days. That is, the planet Venus stays in one zodiac sign for about 23 days and then changes its zodiac sign. The transit of Venus offers various results to all the 12 houses, but according to astrology, when Venus transits in the first, second, third, fourth, fifth, eighth, ninth, eleventh and twelfth houses, auspicious results are obtained. On the contrary, its transit in the sixth, seventh and tenth houses can bring about negative changes in the lives of people.

Each and every one of us wants to have possession of all kinds of material pleasures in life. But, Venus has the power to provide one with such kinds of pleasures and benefits. Thus, when it is in it’s auspicious state in horoscope, luck can shine bright upon people. But, on the other hand, it’s difficult to exercise one with such luxuries when Venus remains in an afflicted state.

But there is no need to worry as astrology has a solution for all of this. Some such remedies have been suggested by experts which can be put to use so as to change the planet Venus’ status in horoscopes and also so that one can appease it greatly.

Is Luck Favourable or Unfavourable? Raj Yoga Report Reveals It All!

Mercury will transit in Virgo in a retrograde motion on 2nd October 2021 at 3:23 am.

If we talk about the planet Mercury, then according to Vedic astrology, it is considered to be the benefactor of intelligence, communication and one’s skin. It is generally hailed to be an auspicious planet but when it gets conjuncted with any malefic planet then it starts yielding negative results. Under such circumstances, the rhetorical abilities of a person gets heavily impacted. Thus, it is very important to keep Mercury in an auspicious state because it helps one to become a great orator and the person’s logical ability also escalates. As we have mentioned already, a negative Mercury can bring speech related problems to a person’s life.

Things to Keep in Mind About Mercury

If we talk about the transit of Mercury then it moves from one zodiac sign to another approximately after a period of 14 days when it is in a direct motion. A retrograde Mercury means that it will seem to appear in a reverse motion rather than moving straight or direct. The transit of Mercury also provides various effects in all the 12 houses but when it remains posited in the 2nd, 4th, 6th, 8th, 10th and 11th houses from your Moon sign, iit generally offers auspicious results. Apart from this its position in all the other houses can be the source of negativity and bad fortune.

In the realm of Vedic astrology the planet Mercury is significantly considered to be the benefactor of intelligence, speech consciousness, business, statistics and skin. In such a situation a person who has a debilitated mercury in their respective horoscope can face failures in all the above mentioned areas. However there is no need to worry astrology has a way out of this and you can prescribe to the necessary remedies associated with Mercury so as to remain at the receiving end of its blessings and lead a peaceful and happy life.

Impact on Zodiac Signs : Luck for these & Bad Fortunes for these

These movements will be favorable for the folks of Scorpio, Sagittarius and Aquarius.

But, Aries, Taurus and Pisces folks will have to stay careful.