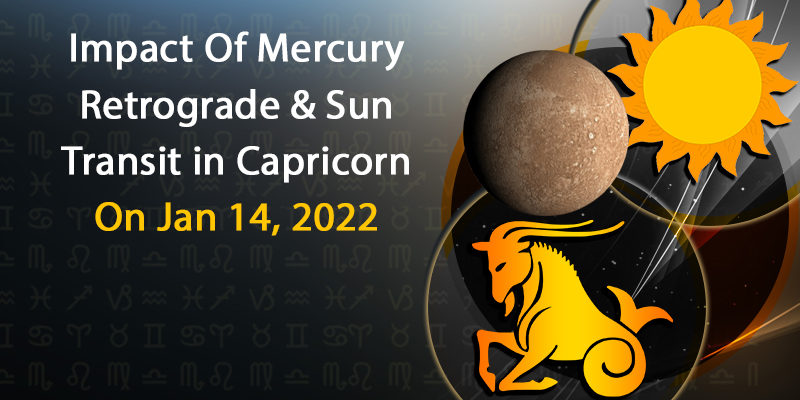 In the realm of Vedic astrology, the transit and retrograde movements of planets hold a special significance. If we explain in simple language, then transit refers to the movement of the planet from one zodiac sign to another one.

How can we miss out on such important and vital factors? On this note, we would like our readers to know that on January 14, 2022, i.e. Friday, two planets are going to change their zodiac signs. Out of these, the Sun will transit in Capricorn while Mercury will enter Capricorn in a retrograde motion.

Naturally, these major changes of two crucial planets in a span of one single day will definitely affect the country, the world and people bearing different zodiac signs. In this regard, suggestions are made to read this blog till the very end and learn some significant facts related to Sun transit and Mercury retrograde.

On 14th January 2022,  the Sun will transit in Capricorn at 14:13. In the world of Vedic astrology, the Sun has been given the status of king of all planets. It is the significator of government services, relationship with father, etc. If Sun resides in an auspicious position in a person’s horoscope then he earns huge wealth, commands respect in society, etc. Along with this, they remain highly enthusiastic to achieve their goals. On the other hand, the weak position of the Sun inflicts problems like loss of job, ill health, etc.

Things to Keep in Mind About the Sun

So far mythological beliefs are concerned, Surya is a Kshatriya planet with more principles. Sun is considered to be a god along with Vishnu, Shiva, Shakti and Lord Ganesha and there are many temples dedicated to this God as well. It is to be noted that only the Saura section of the society worships the Sun as the supreme deity. Sun is invoked by many Hindus and the Gayatri Mantra which is uttered daily by most Hindus is addressed to this God.

Apart from this, all Sundays in the week are dedicated to the planet Sun. In such a situation, one can appease the planet Sun by observing fasts and carrying out the necessary remedies.

In this blog, we are focussing on all the secrets of your life on the basis of planetary movement and retrograde motion.

250+ Pages Personalised AstroSage Brihat Horoscope: Get A Detailed Astro-Analysis Of Your Life

Moving forward, let us talk about this transit whose total duration will be for 30 days. It implies that the planet Sun stays in one zodiac sign for about 30 days and then changes its zodiac sign. The transit of the Sun offers various results to all the 12 zodiac signs. According to Astrology, auspicious results are obtained when the Sun transits in the third, sixth, tenth, and eleventh house while the results are opposite when the Sun transit in the first, second, fourth, seventh, eighth, and tenth house.

Everyone has ambition in their life and the Sun plays a pivotal role in fulfilling them. If the Sun is positioned in an exalted state in a horoscope then all good things will be possible for the person and if the Sun is in a debilitated state, then the position of the person may be dwindling.

But there is no need to worry as astrology has solutions for all these things. Some such remedies have been suggested by experts which can be put to use so as to strengthen the Sun in Kundli and appease the deity.

Mercury is considered to be the benefactor of intelligence, communication, business, statistics. It is generally considered to be an auspicious planet but when it conjuncts with any malefic planet, it starts yielding negative results. Under such circumstances, the unique abilities of a person get dampened. A negative Mercury may inflict problems related to speech, nervous system, etc.

Things to Keep in Mind About Mercury

If we talk about the transit of Mercury, then it moves from one zodiac sign to another approximately after a period of 14 days when it is in direct motion. A retrograde Mercury means that it will seem to appear in a reverse motion rather than moving straight or direct. The transit of Mercury has a different impact for different zodiac signs but when it remains posited in the 2nd, 4th, 6th, 8th, 10th, and 11th house from your Moon sign, it offers auspicious results. Apart from this, its position in all the other houses can be the source of negativity and bad fortune.

Lucky & Unlucky For Which Signs?

These movements will be favourable for the natives of Scorpio, Leo, and Pisces. On the other hand, there are chances that problems may crop up for zodiac signs such as Taurus, Gemini, Cancer, Libra, Capricorn and Aquarius but the natives will overcome them happily.