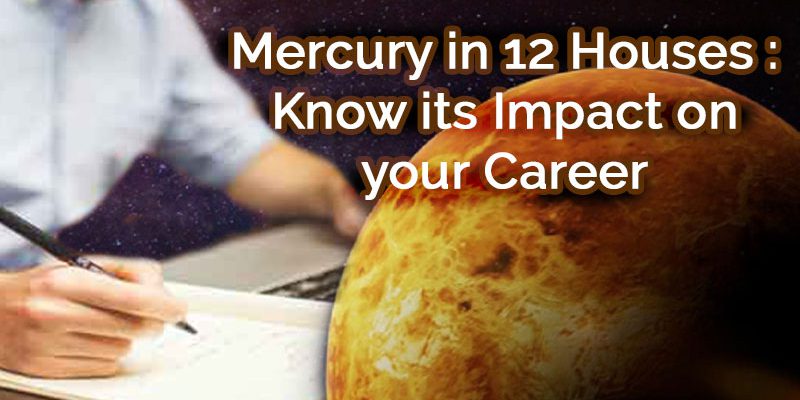 The planet Mercury in astrology is hailed as the significator of knowledge and wisdom. According to the calculations put forth by astrology, this particular planet rules over the zodiac signs Gemini and Virgo. It’s position in a particular person’s Kundli is also considered to be quite significant. If we take into account one’s career, then Mercury also plays an important role in giving it a particular shape. The AstroSage Special CogniAstro Report for Professionals can also be availed to get a clearer picture of one’s career.

If the planet is positively placed in the Kundli, then the person can acquire positive results with tasks associated with it. On the contrary, its negative placement invites some mental tensions to the lives of natives. Mercury also happens to be one such planet which does not maintain friendly relations with the Sun. When a planet is at a particular fractional distance with the Sun, it is considered to be in a combust mode(Ast). If Mercury is with the Sun at 14 degrees or less, then it is considered to be in combust mode(Ast). But the planet Mercury remains free from the negative influences of the sun(and its Ast Dosha) when it is placed with the Sun and the final results hardly vary. Mercury represents the third and sixth house as per the Kaal Purush Kundli.

Let us now move on to find out how the planet generates results while getting placed in all the twelve houses, with special regards to one’s career.

When Mercury remains placed in the first house of one’s Kundli, then such a native usually turns out to be a Mathematician. He or she also happens to be a resident of the foreign land and usually gets involved in trade Ventures which have some foreign connections. Natives with Mercury in their first house of Kundli usually get success when it comes to business with foreign associations. Along with this, the reasoning and logical abilities of such people are also quite noteworthy. If you wish to know more about how will you perform in any of your suggested fields, then you can get a copy of our CogniAstro report for Professionals.

A native who has Mercury posited in the second house happens to be someone who makes a living through writing and publishing work, has excellent writing skills, is usually a good lawyer, obedient to his/her father, a resident of a foreign country, beautiful, has a very soft body, speaks the truth, is interested in traveling, has a sweet tooth, is more of a spendthrift and resides in foreign countries.

When Mercury remains seated in the third house of a person’s Kundli, then such a person turns out to be a successful business person, stays away from his or her native place and earns money, is quite courageous in nature, an expert in Oceanography, has a happy and fulfilling family, possesses all the positive qualities and also the one who completes the assigned projects very efficiently.

When the planet Mercury remains seated in the fourth house of a person’s Kundli, then the native supposedly becomes very intelligent, possesses a tremendous memory power, can also try to be a politician, is very fortunate, has a bulky body structure, is very cunningly intelligent and can also make a living by spying for a politician.

Also, married natives who are on the lookout for a perfect career for their children can use our CogniAstro Report for 10th and 12th Standard respectively.

If the planet Mercury resides in the fifth house of a native’s birth chart, then such a person can do wonders with the help of his/her intellect and also make some earnings through it. He /she usually gets inclined towards religious matters, has a pure soul, is an established member of the society, has sharp wisdom and great technical knowledge.

If the planet Mercury is situated in the sixth house of a person’s Kundli, then such a person spends time in writing and printing work and also makes an unconditional contributions to a social cause. More specifically, such a person’s works are related to water.

Mercury in Seventh House
If Mercury is situated in the seventh house of one’s Kundli, then such a person becomes very proficient in the business field. The person can also team up with qualified women and conquer many territories in the world of business and become able to lead a happy and successful life.

If the planet Mercury is situated in the eighth house of the Kundli or birth chart, then such a person becomes a judge, a lawyer, earns his livelihood through his business and also takes interest in religious works.

Mercury remains posited in the  ninth house of a Kundli and if this happens, then the native earns money through his/her business, offering service to some dignitaries of the society, takes interest in astrology, music and is also of religious nature.

If the planet Mercury occupies the tenth house in one’s Kundli, then such a native becomes obligated towards his/her parents and mentors, earns money through multiple sources and gets engaged in business ventures which deal with four wheelers.

Mercury in Eleventh House
If the planet Mercury is situated in the eleventh house of a person’s Kundli, then such a person earns fame easily, possesses knowledge about the scriptures, is a nurturer of the clan, takes interest in singing arts and earning a livelihood from these areas.

Mercury in Twelfth  House
If the planet of Mercury is situated in the twelfth house of a person’s birth chart/Kundli, then such a person uses up the monetary resources of others, is devoid of addiction, has a religious tendency, is a scholar and also a philanthropist. He lives his life by giving support to others.

So, this is how the planet Mercury and its position in twelve houses can affect your professional life. The predictions given above are of generic nature. If you wish to know customized and personalized results, then your birth date, time and place of birth would be necessary to come into conclusions.