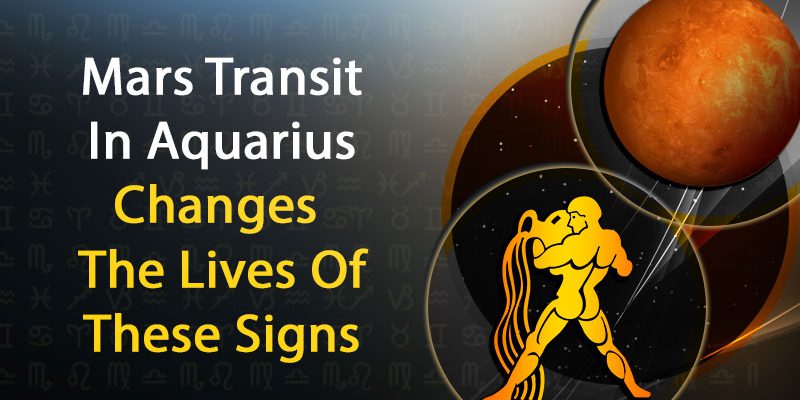 Mars, known as the fiery planet, will get into a transitory motion and enter the Air sign Aquarius on Monday, May 04, 2020, at 07:59 PM. In Vedic astrology, the planetary movements and changes made by Mars is considered highly effective since it transforms one’s life drastically. But the question is, what kind of change will this transit bring for your zodiac sign amid Corona Era?

Being the significator of the Fire element, Mars enters Aquarius, that represents the Air element. In such a situation, the level of hot air and winds will increase, which will automatically impact the environment. With the world fighting a major pandemic, the transit of Mars in the Aquarius zodiac sign will definitely affect all the natives of twelve zodiac signs in one way or the other. A wave of happiness will be witnessed in the lives of some, whereas for others, their lives will be overshadowed by the clouds of crisis. So let us know in detail the impact of this transit of Mars on your zodiac sign during the time of Corona Outbreak.

Mars, the Lord of Aries, will enter the eleventh house of the natives. The planet is also the Lord of your eighth house. This…….Read More

The Mars Transit in Aquarius will cause the red planet to get posited in the tenth house of Taurus natives. This…….Read More

The red planet is the Lord of your sixth and eleventh houses. As a consequence of this planetary movement, you may face…….Read More

Cancer natives will host the transit of Mars through the eighth house. The red planet is the Lord of your fifth house…….Read More

Mars is a Yogakaraka planet for Leo natives because it is the Lord of your fourth house (Kendra/Central Bhav) and ninth house (Trikon Bhav)…….Read More

The Lord of your third and eighth houses, Mars, is not a favourable planet for Virgo natives. During its transit…….Read More

Libra natives will host the transit of Mars through their fifth house. The red planet is the Lord of your second and seventh…….Read More

The red planet is also the Lord of your sixth house, and during this planetary movement, will get posited in your fourth house, which is not a favourable position…….Read More

Mars is the Lord of the fifth and twelfth houses of Sagittarius. Moreover, the red planet is also friends with the…….Read More

The red planet has Lordship over the fourth house of comforts and the eleventh house of income for Capricorn natives. During…….Read More

The Mars transit in Aquarius will cause the planet to be posited in your ascendant, due to which, this celestial movement…….Read More

Mars has Lordship over the second and ninth houses of Pisces natives, and during this transit, it will get…….Read More