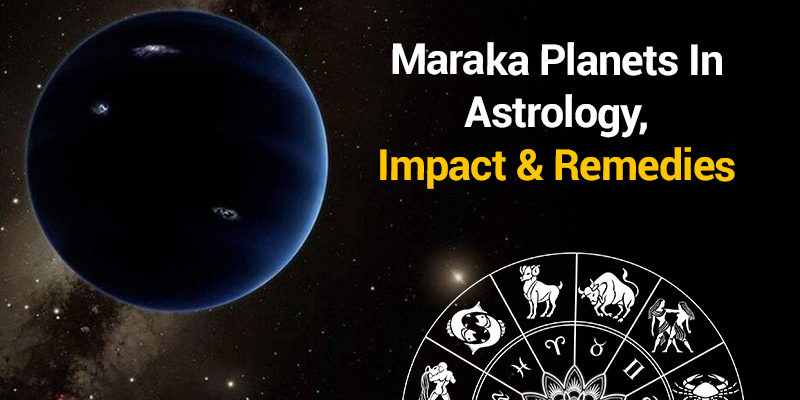 Maraka planets are considered of high importance in Vedic Astrology because it differs from one Kundli to another, i.e. from one Lagna or Ascendent to another. Due to their effects, a native can attain death or death-like sufferings. However, such an unfateful outcome only takes place when the Mahadasha, Antardasha, or Pratyantardasha of these planets is activated. However, it is also not necessary for them to be always adverse or deliver painful results since death is a one-time experience in life.

If the Dasha of a Marak planet occurs more than once in your life, then it is not necessary for it to only bring troubles in your life, but can also bless you with many good results. Analyzing the Marak planets, the effect of different Marak planets for each ascendant i.e. from Aries to Pisces ascendant differs accordingly. There are Navagrahas in astrology, but for the ascendant of each zodiac, different planets play the responsibility of Marak and Karak. In fact, Marak planet refers to such planets which are capable of giving rise to a lot of problems in our lives and whose effect can affect our life negatively. Today, through this article, we will try to know about Marak planets, what is the impact of Marak planets and what kind of remedies can be performed to balance the effects of Marak planets.

The Marak planet is not a special planet, but there are some special planets among the nine planets present in our Kundli, which play a special role for a particular ascendant. In any type of horoscope, the planets play the role of Karaka or Benefactor and provide favorable results in life. On the other hand, some planets are considered neutral, which are capable of giving results based on specific circumstances. Along with these, some planets are termed Marak, which possess the potential to cause troubles in life. When the Dasha of these Marak planets activates in our life, we achieve the fruits as related. Now, how bad that result is depends on the situation, and something can be said about it only after the overall analysis of the horoscope.

Maraka Planets In A Kundli

Mainly the lords of the seventh house and second house are called Marak planets and when their Dasha, Mahadasha, Antardasha, Pratyantaradasha activate, a native has to face various types of obstacles in life. Although it is not favorable to consider the ruling lords of these two houses malefic, the lord of the sixth house of the Kundli is also considered to incur inauspicious results because it is the house of diseases, illnesses, and debt. Some experienced astrologers also consider the house of expenditure, that is, the lord of the twelfth house as a Maraka because it is the house of loss from the ascendant house. Let us now know which planets are considered Marak for different ascendants:

The lord of your ascendant is the Sun and the planet Mercury rules the second house of the Kundli, that is, Virgo zodiac sign. But Mercury is neutral to the Sun, so he does not become a Marak, but being the lord of the seventh and the sixth house, Shani becomes a strong Marak.

Apart from the above, there are some other rules based on which the effect of the Marak planets is determined. If the above-mentioned Marak planets become the dominant Rajayoga karaka planets in the horoscope, then they leave their Marak impact. If a Marak planet is undergoing its Antardasha during its Mahadasha, then it is very painful. Shani Dev is also called Kaal, so under special circumstances, when Shani is related to Marak planets, then Shani Dev himself becomes a Marak by absorbing the effects of those planets, but for this, it is necessary for Shani Dev to be an inauspicious planet for that horoscope.

In Vedic Astrology, the effect of Marak planet is observed during the Mahadasha Antardasha or Pratyantar Dasha of that particular planet. Dasha of Marak planet is capable of causing death or death-like suffering, but in some special circumstances, it also gives favorable results. Generally, when there is an ongoing Dasha of a Marak planet, problems and troubles increase in the life of a person. They face challenges and hindrances in their tasks, which lead to failures and problems. Mental stress increases and mental and physical troubles start bothering them.

One also has to face defamation. There is also an increased chance of any kind of accident or injury taking place. The dasha of Marak planet makes a native face some kind of long-term illness or troublesome situation. If you are undergoing the Dasha of Marak planet, then it is possible for you to face unreasonable distress, fear, and panic in your married life as well. There is a lack of confidence in you and you have to face problems in almost many areas of life.

Personalised Shani Report Reveals The Impact Of Shani On Your Life

However, the dasha of Marak planets is not always painful. First of all, it should be evaluated whether the person’s age is considered young, middle-aged or old, or extremely old. For example, if a native is youthful and undergoing the Dasha of Maraka Planet at a very young age, then the chances of his/her death increase, but if that person is middle-aged, but has the Dasha of Marak planet has activated since his/her younger days, then the person does not die but has to face death-like sufferings, physical problems, and obstacles at work.

If the Marak planet in the Kundli is in a favorable condition i.e. posited in its own or exalted sign, then it is also possible that when the Dasha of Marak planet occurs, some physical problems may arise, but favorable results in many areas of life can also occur, thereby leading to success. According to astrology, Sun and Moon do not attain the Dosha being the Ashtamesh or the eighth house lord. This means that if either of these planets are the ruling lord of the eighth house, then they do not cause death but being the eighth house lord, there can be troubles in life.

Now if the Sun, being the lord of the eighth house, is in its exalted sign in the Kendra, then with the Mahadasha of the Sun being activated, fear, nervousness, mental stress and physical pain can dominate the life of that native due to the effect of the eighth house. But because the Sun is in its exalted state, the native will see a rise in his/her respect and witness strong financial conditions. Thus, the effect of the Marak planet can be seen in different forms and different situations in life.

We know that Marak planets are the major cause of suffering in one’s life, and seeking the blessings of God is the main way to get rid of suffering. That is why it is said that a person should always perform good deeds so that he does not have to undergo painful times and should always be ready in devotion to God so that God can eliminate his/her sufferings.

In Vedic Astrology, when the Dasha and Mahadasha of Marak planet is activated and the native is facing several types of problems, then performing some special measures can solve the problem to some extent. However, let us assume that whatever you are getting in life is the result of your actions, so you will have to suffer accordingly, but by seeing the grace of the One, you become capable of handling such difficult times and challenges. Following remedies can be performed in case the Dasha of Marak planet is activated:

In this way, the malefic effects related to the Marak planet can be reduced to some extent by performing the above measures, because whatever results we attain due to the influence of the planets in this life directly proportional to our past actions. So always keep in mind that no one should be hurt by any of your actions. Do good deeds. In such a way, Marak planets do not create obstacles in your path, and one attains the grace and blessings of God.

We hope that you have liked this article on Marak Planets in Astrology. Thank you for staying connected with AstroSage!