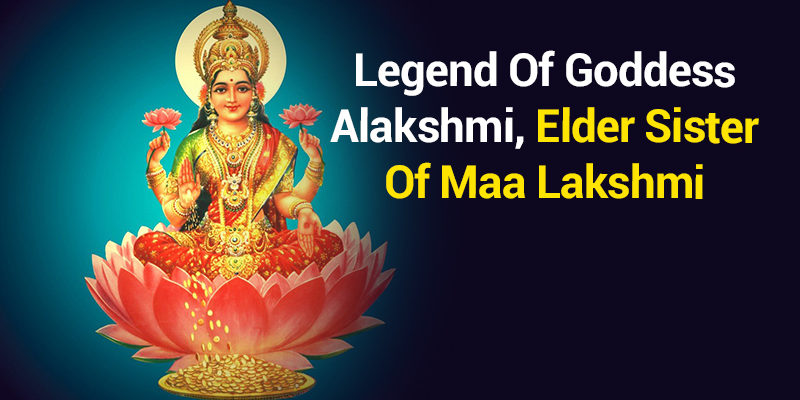 The description given in the Puranas shows that Goddess Alakshmi is of dark complexion, her hair is scattered, her eyes are red and she always wears black clothes. Let us now tell you how Goddess Alakshmi was born.

How did Goddess Alakshmi originate?

According to the story mentioned in the Shiva Purana, at the time of the churning of the ocean, the poison named Halahal was first produced, which was consumed by Lord Shiva. After that, the nectar originated, which was distributed to the deities by Lord Shri Hari Vishnu in the form of Mohini. Alakshmi Ji was born from the drop of the poison Halahal. For this reason, Alakshmi is considered to be the elder sister of Maa Lakshmi.

Where does Goddess Alakshmi reside?

It is believed that when Shri Hari Vishnu Ji got married to Mata Lakshmi, then Alakshmi ji always used to reach Vaikunth Dham. whenever Lord Vishnu would be alone, Maa Alakshmi would sit with him with dirty feet and scattered hair. Seeing this, Goddess Lakshmi got very angry one day and cursed her elder sister saying, “you will always live in those houses where there will be no cleanliness and with your arrival, poverty will enter the house.”

After the anger of the Maa Lakshmi quelled down, Lord Vishnu got Goddess Alakshmi married to a Maharishi named Udyalak. Rishi Udyalak took Alakshmi with him to the ashram where Yagya, incense, lamp, mantra, meditation etc. were taking place. Due to the curse of Maa Lakshmi, Devi Alakshmi got angry seeing the ashram and told the sage that this place was not suitable for her.

Hearing this, Udyalak Rishi asked her where she wanted to reside. On which Goddess Alakshmi said that she loves that place where aarti, kirtan, incense, lamp are not followed, where there is always trouble in the house, where Brahmins are not respected, where dishonest money is kept, where there is filth everywhere in the house, no virtuous work is done in the evening and where demons like malice, jealousy, premature death reside.

Hearing all this from the mouth of Alakshmi ji, the sage was saddened and he took her to the forest and abandoned her under a peepal tree. After being abandoned by her husband, Goddess Alakshmi sat down and mourned. Hearing the lamentation of Goddess Alakshmi, Vishnu ji told her that she can live in all the places she loves, but any place where the river of devotion flows, houses are clean, rules and virtuous works are performed, where Maa Annapurna is respected, where Brahmins and animals are respected and where sacrifices are performed, where there is the abode of Satsang and love, the departure of Goddess Alakshmi will be prohibited.

It is believed that Goddess Alakshmi started residing on the Peepal tree due to her husband’s abandonment under the Peepal tree. This is also one of the reasons why planting the Peepal tree is considered inauspicious even after being revered in Sanatan Dharma. It is said that Mata Lakshmi resides on Peepal during one part of the day and Mata Alakshmi resides at night. This is the reason that if a Peepal tree sprouts in the house, instead of breaking it or burning it, it should be planted at another place according to the law. During this, raw milk is offered on it, and then it is removed along with the root and planted at some other place.

There is also a story related to Goddess Alakshmi that since she was born with liquor from the ocean, she was handed over to the Asuras by the order of Lord Vishnu. It is possible that Goddess Alakshmi can reside in such a house where there are conflicts and arguments even after venerating Maa Lakshmi.

How are Maa Lakshmi and Maa Alakshmi different from each other?