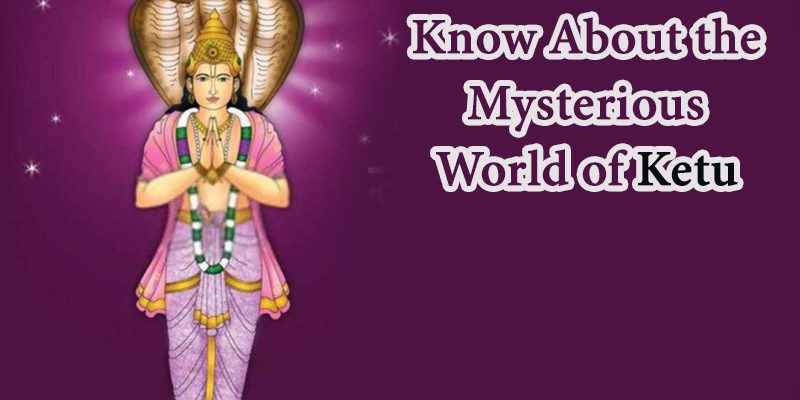 Ketu is also known by the names of Shikhi and Dhwaj in Vedic Astrology. This is why a flag (Dhwaj) is considered to be the shadow planet’s symbol. If you have any questions concerning the planet Ketu or wish to know its influence on your career, business, health, education, or family life according to your kundli, then click here to talk to our expert Acharya Mragaank.

People often think that Ketu is an inauspicious planet, but that is not the complete truth. The shadow planet doesn’t always offer negative results to the natives. Instead, when posited in the third or eleventh house of one’s kundali, it helps the person progress, and move forward in life. When in conjunction with the Sun or the Moon in a birth chart, Ketu forms the Grahan Dosha. Its effects on various aspects of your life, like business, marriage, family, etc. is rather extensive. Does your kundali have Grahan dosha? Get the answers to all your questions with Brihat Kundali. Moreover, understand the influence of Ketu and other planets, and get detailed information through precise kundali analysis, breakdown of planetary yogas and doshas, remedies, and more.

Ketu, when present in one’s kundali in a specific manner, can even offer Moksha to the native. Simultaneously, it can also create a Kalsarpa Yoga when positioned in a particular place. Its influence in the celestial globe is believed to be in the Vayavya Kone (angle), i.e., the north-west direction. When positively placed in a birth chart, the shadow planet can help a person reach heights of fame and honour. Such a person rises rapidly in their profession. If you are worried about your career, then you can easily find the solution in your personalized AstroSage CogniAstro Report.

Religious Importance Of Ketu And Its Impact On Life

The one whose aura is like that of the Palash flower (Bastard teak/flame of the forest), who is of terrifying nature and son of Rudra, is exceptionally fierce, and dominant among planets like Taraka, etc. I bow to that Ketu.

According to Hindu mythology, a demoness Sinhika had a son Swarbhanu, who was intelligent, powerful, and ambitious. He wanted a place amongst the Devas (Gods). When the Demons and the Gods mutually decided to do the Samudra Manthan (churning of the ocean), several gems and finally the nectar of immortality, Amrit emerged from it. Both groups wanted to become immortal by drinking Amrit. Thus, as soon as the nectar appeared, the Devas and Danavas started fighting over it, as both wanted to quickly drink the nectar and gain eternal life.

The Devas went to Lord Shree Hari Vishnu for help. So, He took the avatar of gorgeous Mohini and enchanted all the demons with her beauty. At this point, Lord Vishnu slyly gave the Amrit to the Devas, while the Danavas drank wine, thinking it was the nectar. However, Swarbhanu somehow understood the Lord’s scheme and secretly went to sit with the Gods, waiting to drink the nectar.

As soon as Lord Vishnu, in his Mohini avatar, offered the nectar to Swarbhanu, the Sun and Moon Gods recognized the demon. They made this evident to Lord Vishnu, who immediately cut off Swarbhanu’s head with his Sudarshan Chakra in anger. But by then, the Danava had sipped the nectar.

To know more about Ketu and ways to appease it, click here to check our exclusive web story!

Although the Chakra separated his head and body, they were both immortal. Thus, Swarbhanu was given a place amongst the navagraha. Now his head is known as Rahu, and body, Ketu. To take revenge from Sun and Moon, who were responsible for recognizing him, the demon’s head and body eclipse the luminary planets. This is the reason, as per Vedic Astrology, why the Solar Eclipse and Lunar Eclipse occur.

Ketu is always in retrograde motion. Although it is not visible, Astrology recognizes it as a shadow planet. Also known as the Dragon’s Tail, it does not have Lordship over any particular zodiac sign. However, Sagittarius and Gemini are the signs where it is considered to be in exalted and debilitated positions, respectively. Due to some differences in opinion, many also believe that the planet becomes exalted in Scorpio, and debilitated in Taurus.

If Ketu is posited in the Kendra Bhava (Central House) with the Lord of the Trine Houses (Trikon Bhava) or posited in the Trikon Bhava with the Lord of the Central House, then this becomes a powerful Raja Yoga Karak. Such positions help a person reach the heights of success quickly. The shadow planet makes one religious, and when positively placed, can help you become the head of a temple, holy place, or religious institution. Natives influenced by the Dragon’s Tail often put a flag on their vehicles.

A favourable and auspicious Ketu in one’s Kundali brings them fame and success. When positively placed, it offers one courage, spirituality, and gymnosophisty (solitude/quietude or Vairagya). On the flip side, negative influence of the shadow planet often leads to problems for the person. When inauspiciously placed, it weakens the native’s legs and alienates them from the love of their maternal grandfather and uncle. Moreover, it can create health issues pertaining to their spinal cord, knees, private parts, joint pain, kidney, leg, ear, etc.

The placement of planet Ketu causes a person to indulge in social service, connect with the field of spirituality and religion, help others, and work in tandem with religious institutions. Poisonous creatures, brown or black coloured animals and birds, etc. fall under the domain of the Drgaon’s Tail.

Ketu is of Jaimini gotra, its colour is that of smoke, and he wears smokey-colored clothes. His face is deformed and he rides an eagle. Both his hands hold a Vara Mudra and a Gada. His Adhi Lord is Chitragupta, while Brahma is his Pratyadhi Lord. His main mantra is: “ॐ ह्रीं ऐं केतवे नमः।/oṃ hrīṃ aiṃ ketave namaḥ.”

According to various proven scriptures, one should wear the Lehsunia (Cats Eye) gemstone to appease Ketu. It removes all maleficence of the shadow planet from one’s kundali. As an alternative to Cats Eye, Firoza or Turquoise can be worn instead. If due to some reason, one cannot wear the gemstone of Ketu, then they can instead carry the Ketu Yantra with them. It should be worn on a Saturday, on an iron amulet.

Wearing the Ketu Yantra in this manner helps remove all negative impacts of the shadow planet, Ketu.

How To Observe Fasts For Ketu

Taking A Medicinal Bath For Ketu

The science of Astrology holds a certain significance for herbal baths, which can assuage all problems created by Ketu. As per this, if one wishes to appease the adverse effects of the shadow planet, they should chant the following mantra while bathing with these herbs:

Red Sandalwood, Lodhra, Gajamad, Musk (Kasturi), Nut Grass (Motha), Alkanet (Ratanjot), Sheep Urine, Pomegranate, and Heart-leaved Moonseed (Giloy/Guduchi). If all the above ingredients are not available, then get those obtainable in the maximum quantity that you can.

Whenever you observe some remedies pertaining to the planet Ketu, you should chant the following mantra throughout it:

The one with smoke-like aura, the two-handed one, the holder of the Gada, posited on the pedestal of donkey, the fierce-faced one, whose body parts are adorned with a crown and armlets, and the mild-mannered Ketu – may he always bestow me with boons.

In some instances, Ketu is considered to be similar to Mars, i.e., in particular positions, the shadow planet offers results similar to that of the red planet. Just like Ketu, the effects of Rahu, Mars, and Saturn also influence your life significantly. The Shani Report created with the help of your birth details, helps answer all your questions concerning Saturn precisely. Moreover, it also tells you how this planet has the powers of affecting your life in this dangerous phase of Coronavirus.

In certain circumstances, Ketu can become highly inauspicious, and thus cause physical and other problems. If:

Then, in these situations, the shadow planet Ketu can become quite problematic for the native. If Ketu is afflicted in your birth chart, then you can face problems like:

How Will Planet Ketu Influence Your Life? Ask A Question From Our Astrologers

The Beej mantras and other such Ketu mantras can help one easily receive the blessings of the shadow planet. These are:

The Brahmanda Purana also mentions a Ketu Sloka which is a prayer to be rid of all pains:

The one endowed with the great Shira, i.e., Nadi, the one with the massive mouth, big teeth, all powerful, the one who is body-less and has hair going upwards, the one in the form of Shikhi, Ketu may you take away my pains.

In addition to the mantras mentioned above, the following remedies are also highly effective: