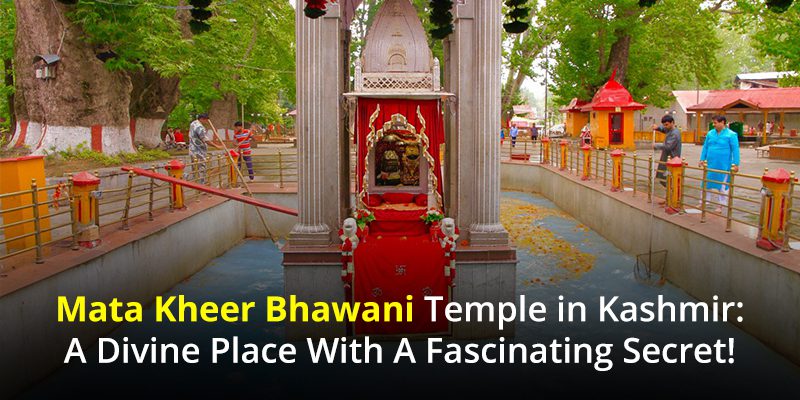 The famous Kheer Bhawani Fair of Kashmir was to be held on Saturday, May 30 this year but has been cancelled due to ongoing nationwide pandemic, and major regions of Kashmir are in the Red Zone due to Coronavirus spread. This fair is usually held every year on the Ashtami Tithi of Shukla Paksha in the month of Jyeshtha in the Kheer Bhawani Temple located in Tul Mul village of Ganderbal district of North Kashmir.

For Immediate Problem Solving and Queries, Ask a Question Now!

Kashmiri Pandits maintain special faith towards Mata Kheer Bhawani. It is believed that there is a water reservoir inside the temple which indicates the occurrence of upcoming disasters in advance. Even with the clouds of terror hovering over Kashmir, thousands of Kashmiri Pandits settled in the country and around the world visit this place to attend the fair every year. For this, adequate arrangements are made by the government for the convenience of the passengers and every possible assistance is provided to them. But unfortunately, this year, they won;t be able to witness the grand celebrations.

Due to people’s faith, not only Kashmiri Pandits but people from other states also participate in this fair. On this note, let’s know some interesting facts about this place and fair as well. We hope that after reading the details mentioned in this article about the miraculous Ksheer Bhawani Temple and the Mela, there will be a slight decrease in your disappointment.

Who is Mata Kheer Bhawani?

Located in the Kashmir Valley 24 kms from Srinagar, the Kheer Bhawani Temple is dedicated to the Hindu Goddess Kheer Bhawani or Maharagnya Bhagwati. Mata Kheer Bhawani was also known as Shama. According to legends, Mata Ragnya first resided in Sri Lanka, but moved from Sri Lanka to Kashmir during the reign of Ravana. It is said that due to her Vaishnavite tendencies, Mata Ragnya disliked the wrong ways and deeds carried out by the Demons. When Ravana crossed the line, Lord Shri Ram emerged and became the destroyer of sins, ultimately ending the Evil by killing Ravana.

After Ravana’s death, Shri Ram asked Lord Hanuman to drop the Goddess at her desired place. Mata Kheer Bhawani expressed her desire to visit Satisar (land of Kashmir). Then, following the orders of Goddess Ragnya, Hanumanji brought her to Srinagar with 360 serpents. The main temple of Mata Kheer Bhawani is established in Tul Mul area of Ganderbal district in Kashmir, which was founded by Maharaja Pratap Singh. There is also a water reservoir in this temple, which is considered to be miraculous.

Thousands of Diyas & Kheer For The Goddess

The atmosphere at the Kheer Bhawani Temple remains devotional during the Kheer Bhawani Mela or Fair. Aarti is held in the temple two times a day, i.e. in the morning and evening, where thousands of diyas are lit together. Lighting so many Diyas together catches the eye of every local and traveller and remains a center of attraction among the people. With the first rays of the Sun, a big line of devotees can be seen outside the temple. During the puja, various types of Bhog or Offerings are made for the Goddess after adorning her with beautiful ornaments and clothes.

The offerings include Dry Fruits, Khand, Milk, and Sweetened Rice Pudding or Kheer. Special flower decorations are done in the temples. Dozens of stalls are installed on the streets by the locals, and Bhajan-Kirtan is also performed by devotees at Kheer Bhawani temple. Due to the cancellation of this fair, the locals are quite disheartened, since their won’t be any major source of income in this difficult time.

To Attain Success In Your Career & Education: Order Your CogniAstro Report Now

Every year, before the puja is conducted on the Ashtami of Jyeshtha Shukla Paksha, the Purohits or priests pour milk and kheer in this kund or reservoir. The water color of the reservoir changes by adding Kheer. People come from far and wide to visit this temple and take a glimpse of this reservoir.

A Symbol of Hindu-Muslim Unity

The Kheer Bhawani Mela or Fair of Kashmir is considered a symbol of Hindu-Muslim union. It is said that the local Muslims also take part in this fair, look after the Kashmiri Pandit devotees visiting there and arrange for the worshipping materials. Stepping up an extra notch, these locals take full care of their convenience. The materials used in the temple are sold by the locals there. From former Chief Minister Omar Abdullah to Mehbooba Mufti, big names have visited the Kheer Bhawani Temple and offered their prayers. However, due to the unfavourable political environment in Kashmir, the administration has arranged for strong security arrangements here.

Buses are also arranged by the state administration. Administrative officials take good care of travelling, security and other facilities for the pilgrims. Since Article 370 has been revoked in Kashmir, the atmosphere has worsened significantly in Kashmir. In such a situation, the government will have to make special arrangements to protect the devotees from organizing this fair this time. Adding to it, in times of Corona, this Mela has been cancelled by the government, which has introduced restrictions among the community as well.