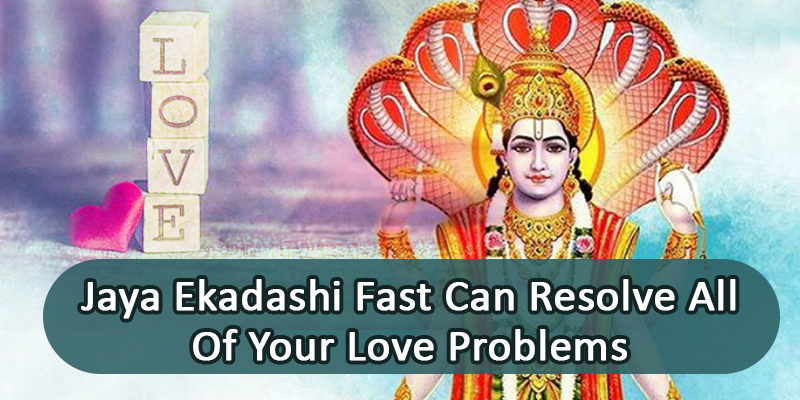 As per Hindu religious beliefs, Magha month is considered to be highly auspicious and fruitful. Ekadashi of Shukla Paksha in Magha month is known as Jaya Ekadashi. It is believed that whosoever observes this fast, gets rid of pain, poverty and troubles.

In addition to this, this fast helps a person get relieved from the fear of becoming a ghost or vampire.

Let’s know when Jaya Ekadashi Vrat is going to fall and its Shubh Muhurat in 2021.

When will Jaya Ekadashi be Celebrated?

The above mentioned Muhurat is applicable for New Delhi only. Click here to know the Jaya Ekadashi 2021 Muhurat of your city.

This fast is considered to be highly significant. There is a belief that this fast helps a person get relieved from the fear of becoming a ghost or vampire. Bhagwan Narayana should be worshipped with due rituals on this very day and one should remain only on fruits. It is said that this fast gives fruits equal to that of Agnistoma Yagya. Also, this fast is helpful in getting rid of sins and there is peace, prosperity and happiness at home.

As per prevailing belief about Jaya Ekadashi Vrat, whosoever has been facing ups and downs in love relationships, should observe it. It is believed that one gets rid of all the challenges in love relationships by the blessings of Lord Vishnu on this very day. In addition to this, if the relations between wife and husband are strained or have reached the point of divorce, then the situation can change by the observance of this fast.

Career As Per Your Desire: Order CogniAstro Professional Report Now!

Once, Lord Shri Krishna narrated the legend of Jaya Ekadashi Vrat to Yudhisthira stating that a festival was going on at Nandanvan and all deities, sages and divine men were a part of it. Gandharvas were singing and female members were dancing to their tune in this festival. Among them, there was a Gandharva named Malyavan and a girl named Pushyavati. During the festival, she got attracted to Malyavan and tried to attract him by her dance. On seeing this, Malyavan was so much attracted that he lost his senses.

Both of them got emotional and expressed their feelings to each other. During this, Devraj Indra felt bad and took it as his insult. He got angry at Pushyavati and Malyavan and cursed them to be deprived of heaven and go to live on the earth and become vampires.

Both of them got vampires because of the curse and started living on a tree at Himalaya Parvat bearing troubles. They had to face several challenges by being vampires. During this, the Ekadashi of Shukla Paksha fell in Magha month while they were going through the curse. They remained only on fruits and had to stay awake due the cold and so, they died.

However, they died during Jaya Ekadashi Vrat and therefore, they got relieved from the state of vampires and went to heaven. Devraj Indra got astonished to see both of them together and asked how they turned normal human beings. Then, Malyavan replied that the influence of Jaya Ekadashi Vrat has helped them in getting rid of being vampires. Devraj Indra god pleased on hearing this and said that they were the devotees of Jagadishwar and therefore, they could stay in heaven with peace.

Things to be Done & Not

Reciting the Path of Vishnu Sahastranam and Vishnu Shatnam Stotra is considered to be highly auspicious. On this day, everybody should abide by virtuous life. Besides this, those who can’t observe this fast, are advised to venerate Lord Vishnu and Maa Lakshmi. Also, Satvik Bhojan should be taken and one should not speak ill of anyone and avoid intimacy. Things such as garlic, onion, brinjal, meat, liquor, betel nut etc. should be avoided on this very day.