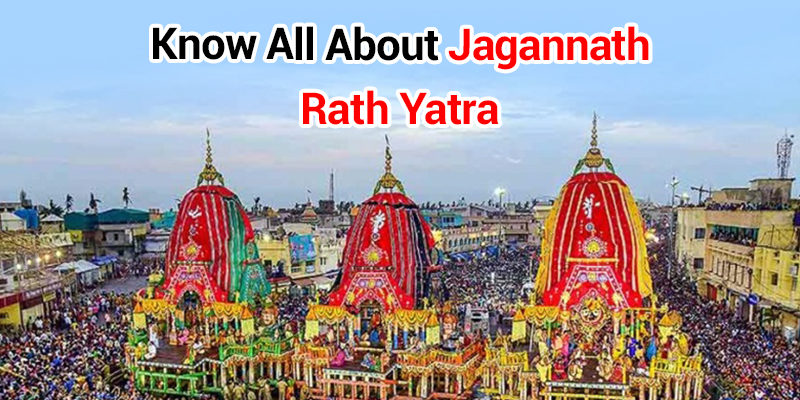 This year, the most famous Puri Jagannath Rath Yatra is going to be held on July 12. As per the Padma Purana, the Dwitiya Tithi of Ashadha month during Shukla Paksha is considered to be auspicious for carrying out all religious activities. For the last few days, the subject which was under the cloud whether Jagannath Rath Yatra will be carried out or not, but belief has won over and the Supreme court has upheld the decision in the favour with some restrictions. Keeping in mind the fury of the Corona Pandemic, the court has urged the people to follow the guidelines and not to break the rules. With this decision, the wave of happiness has started flowing among people. Let’s know shed on some of the interesting facts of Jagannath Rath Yatra which you may not be aware of.

According to Hindu Panchang, this yatra usually begins on the Dwitiya Tithi during Shukla Paksha in the month of Ashadh and ends on the Dashami tithi. It is believed that the Lord himself witnesses the sorrows and happiness of humans and eliminates every obstacle. You can also click here if you wish to get a detailed astrological solution to any of your life problems from our expert astrologers.

Earlier, the Supreme court banned the Rath Yatra and thus, people got disappointed. But keeping in view the faith of devotees, the Supreme Court said that it would not meddle with the decision of the Odisha government allowing the Yatra to be held only in Puri Jagannath Temple. Due to the danger of Delta Plus Variant and the possibility of a third wave, the Supreme Court has dismissed all the petitions challenging the state government decision. The petitioners wanted that the Yatra should also be carried out in other districts of the state such as Kendrapara, Bargarh, etc.

Pradeep K Jena, the special relief commissioner of Odisha, said that those who have Covid 19 negative reports and have been fully vaccinated are only allowed to participate in the rituals by following the guidelines of the court. Even this year also, all the devotees are not allowed.

For your information, this is the second time when many flip-flops have taken place in the program of Rath Yatra. Besides this, as per the reports, this Yatra was also banned during the era of Mughals from the period of 1733 to 1735 and this happened somewhere before 284 years ago. At that time, Taqi Khan invaded the Jagannath temple due to which the idols of the gods were shifted to another place. The 10 day-Yatra known for its historical importance and religious significance is not only famous in India but across the world. This is one of the biggest festivals to be held in Puri. Lakhs of devotees across the world flock to Puri to celebrate this massive festival. It is also believed that those who take part in pulling the Rath are blessed with salvation.

Note: The Muhurta mentioned above is applicable for New Delhi. Learn auspicious Muhurat for your city.

The “Heaven” Of The Mortal  World: Jagannath Puri

The four pilgrimage sites or Char Dham (Badrinath, Dwarka, Jagannath Puri and Rameswaram) hold special significance in Hinduism. Jagannath Puri is considered one of these sacred Char Dham sites. According to the Puranas, Jagannath Puri has been entitled as the “Heaven” or “Baikuntha” of this mortal world called Earth. The temple located here is more than 800 years old.

Lord Krishna is enthroned as Jagannath in this temple. His elder brother Balarama and sister Goddess Subhadra are also worshipped here. Just like Holi, Diwali, Dussehra etc, Puri’s Rath Yatra is also celebrated as one of the biggest festive occasions. Apart from Puri, the Rath Yatra is also organized in different cities of India. Jagannath Yatra is an important event in Hinduism, as its description can be found in Skanda Purana, Narada Purana, Padma Purana and Brahma Purana etc.

250+ Pages Personalised AstroSage Brihat Horoscope For All Possible Solutions To Your Problems!

Lord Jagannath is considered to be an incarnation of Shri Krishna. We get information about his glory in numerous religious texts and Puranas. The Jagannath Rath Yatra consists of a chariot with the idols of Lord Krishna, his elder brother Balarama and sister Subhadra being carried out for locals to witness and seek blessings. It is believed that whoever participates in this Rath Yatra and pulls the chariot attains Moksha or Salvation, and witnessing this Yatra enables a native to get rid of the physical and materialistic attachment of birth and death. Lakhs of devotees attend the Rath Yatra.

For organizing the Puri Rath Yatra, three different wooden chariots are formed for Shri Krishna, Balarama and Goddess Subhadra. Lord Balrama’s chariot leads the Yatra, followed by Devi Subhadra’s and then Lord Jagannath’s. Chariots are identified by their colour and height, and no iron nail or any other metal is used in their construction. The selection of materials for chariots begins from the day of Basant Panchami, and construction starts from Akshaya Tritiya. Lord Jagannath’s chariot consists of sixteen wheels, which are red and yellow in color. Balaram’s chariot has fourteen red and green-coloured wheels whereas Subhadra’s chariot has twelve wheels which are black and blue in colour.

The Rath Yatra commences from Jagannath Temple on the Dwitiya or second date of Shukla Paksha during the Ashadh month. Devotees pull these chariots with great pomp and show, Dhols and conch shell sounds. The Rath Yatra passes through Puri Nagar to the Gundicha Temple, where Lord Jagannath, Balarama and Goddess Subhadra rest for seven days. Gundicha Temple, also known as ‘Gundicha Bari’, is considered to be the home of the Lord’s maternal aunt. After nine days, Lord Jagannath returns to the Jagannath temple with his siblings.

The “Maha Prasad” Of Jagannath Temple

Jagannath Temple is the only temple in the entire country where the Prasad is popularly called ‘Mahaprasad’. Mahaprasad is said to be a supreme offering or Prasad, which is distributed equally to everyone without any discrimination. It is said that the Jagannath Temple’s kitchen is the largest kitchen in the world. The cooking process at this temple is said to be an extraordinary sight. For this, seven types of utensils are placed on each other, and everything is cooked on woodfire only. In this process, the item in the top-most utensil gets cooked first, followed by others. The Mahaprasad prepared in this temple never falls short, but with the temple closing, the Mahaprasad ends as well.

Why is Rath Yatra Conducted?

You must have got detailed information about Rath, temples, offerings or Prasad, Yatra etc. But the biggest question arises and that is why this Rath Yatra is conducted. Several facts about the Rath Yatra of Lord Jagannath are popular around the globe. It is said that one day, Lord Jagannath’s sister Subhadra expressed her desire to see the city and requested him for a visit to Dwarka. Accepting his sister’s request, Lord Jagannath asked for a chariot and took his sister for a tour of the city. Since then, Jagannath Rath Yatra is carried out here every year.