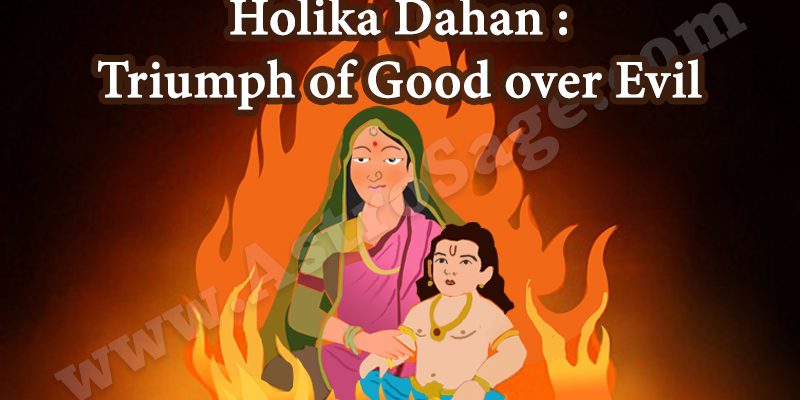 9th of March, 2020 will be celebrated as Holika Dahan all over the country. The importance of this festival increases because it is very closely associated with the festival of colours, Holi.

The Secret to your Success for the Upcoming 12 Months : Flat 60% Off on AstroSage Year Book

Now, the festival Holi needs no special introduction and it occupies a special position in the list of all primary Hindu festivals and events.

All the necessary information about the auspicious time of Holika Dahan is given in the table given below.

Note : To know the Appropriate Muhurat for your city, Click Here!!

Victory of Truth over Evil

If you are contemplating organizing the Holika Dahan Puja, then you will be needing several special things in particular. They are :- cakes made from cow dung, cow dung, Ganges water(Gangajal)or clear water, some flower garlands, yarn, five kinds of grains, Roli-mouli, Akshat, turmeric, batashe(sweets), rang-gulal(colours), fruit-sweets while conducting the Puja.

Corona Virus Highlights : An Astrological Take on the Pandemic

This story dates back to the ancient period when a King named Hiranyakashyapu happened to be a powerful ruler of his time. An equivalent amount of ratio could be seen in his arrogance and barbarous nature. Hiranyakashyapu wanted his subjects to worship him and not any other God. Consequently, he seeked the status of “God” from his kingdom. However, his son Prahlad was an avid worshipper of Lord Vishnu because of which Hiranyakashyapu used to despise his own son.

Many times, he tried to persuade Prahlad to let go of his faith in Lord Vishnu. But, he did not give it up easily. Witnessing the firm devotion of Prahlad, Hiranyakashyap started to inflict various pains upon Prahlad. After numerous failed attempts, he decided to murder Prahlad. Holika, his sister came forward to help him.

They hatched a diabolic plan together. Holika had acquired a boon, because of which she was known as ‘the unburnt’. No fire on earth could reduce her into ashes. Lord Vishnu discovered what’s going on in their minds and saved Prahlad from the fire. Miraculously, it was Holika who was burnt in the fire and not Prahlad. Ever since then, the tradition of celebrating holika Dahan came into existence.

Why is Holika Dahan Celebrated?

Holika Dahan is a festival commemorated to celebrate the prevalence of good over evil. The pious fire is worshipped on this day as grains are offered to it. The same grains are also used to organize a Hawan and there is also a tradition of bringing back the left behind ashes to home. It is kept in the sacred altar.

The Secret to your Success for the Upcoming 12 Months : Flat 60% Off on AstroSage Year Book

Holashtak begins eight days before the festival of colours is celebrated. During these eight days, it is considered inauspicious to commemorate any kind of holy activity. Apart from this, if there are any tasks associated with anyone’s birth and death, then a Shanti Puja should be organized prior to it.

Holashtak this year has begun from the third of March onwards.

We hope that you will appreciate this blog of ours on Holika Dahan. Wish you all the best for the upcoming festival of colours!