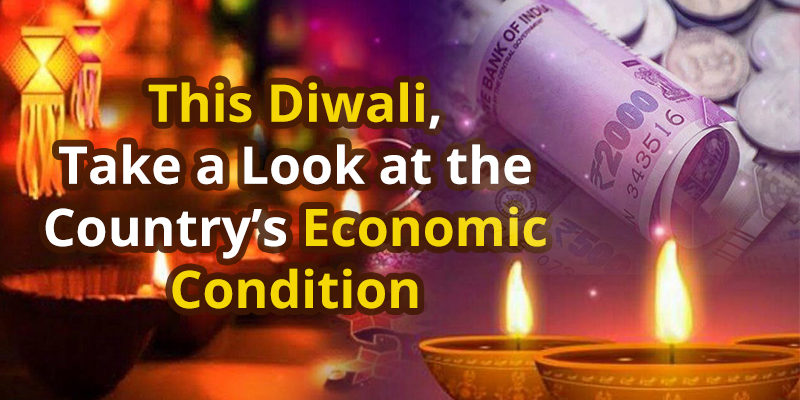 Diwali, the festival of lights is celebrated not only in India but all over the world, and everyone eagerly looks forward to celebrating this day with great joy and fervour. This is the reason that people from all walks of life are seen lighting candles, distributing sweets and finding various other ways to share happiness and joy. In fact, the festival of Diwali signifies the victory of light over darkness and removes the darkness inside us and helps us set foot on the path of light.

In the truest sense, Diwali is a reflection of our respective economic conditions as we celebrate Diwali according to our financial abilities. Not only this, if we talk about astrology, Medini astrology is not individual specific but an indicator of the coming events according to the position of planets for different states, countries and the whole world. Just as the new year begins from Chaitra Shukla Pratipada, similarly the economic situation of the country and the world is monitored over the coming one year period with the help of predictions based on the position of the planets on Kartik Amavasya i.e. Diwali. Various advances are made to see what kind of results the financial year will bring.

This year, the grand festival of Diwali will be celebrated on Saturday, 14 November 2020. This time, after a long gap, the festival of Deepawali will be celebrated in Sarvartha Siddhi Yoga, which is considered quite auspicious for inducing success in all kinds of tasks and shopping activities carried out on this day. Amavasya is celebrated when both the Sun and Moon are at a particular fraction.On the occasion of Diwali this year, due to the Sun and the Moon being conjuncted at equal fractions in Libra zodiac, Kartik Amavasya will take place and that is when the joy of people will know no bounds.

Diwali 2020 and Saturday : What is the Special Connection?

As already mentioned, Diwali this year will be celebrated on Saturday. It is important to note that when Amavasya Tithi remains effective in the evening, that is the time when Diwali is celebrated because Mata Lakshmi enters everyone’s house after evening. On Saturday night in the evening, mustard oil lamps are lit under the Peepal tree seeking the blessings of Goddess Mahalakshmi and this time Diwali will be celebrated on Saturday and oil lamps will be lit on that day. Obviously, this coming Saturday will be a special Saturday and the blessings of Mata Mahalakshmi will definitely be showered upon you. Lighting oil lamps on this day will not only remove darkness from your life, but will also improve your health.

If we take a look at the planetary positions of this day, then the following details come into the light.

The horoscope given above for the day of Diwali and it tells about the economic situation to be prevalent in the country in the upcoming year/time. On the basis of this, the social and economic condition of the country can also be analyzed.

This year, Diwali is falling on Saturday. Common narratives always state Shani Dev as a cruel planet and some people consider it somewhat inauspicious that Diwali is falling on Saturday. But, it is also interesting to note that this time Shani Dev is sitting in it’s own zodiac, Capricorn and hence it will provide success in providing stability in life. In the zodiac sign representing religion, Sagittarius, the ruling lord of religion and knowledge, Jupiter will remain seated. This will also turn out to be quite auspicious.

A Sneak Peek of the Upcoming Year

On the day of Diwali this year, Shanidev will help you to get out of the current financial situation by remaining seated in it’s own zodiac sign. Although Saturn is considered to be the slowest moving planet and for this very reason, countrymen will have to be patient for some time because it may take some time to recover from the economic situation, but recovery is definitely on the cards. According to the scriptures, because of Kartik Amavasya falling on Saturday, it is harmful for food items. It basically suggests that there may be loss of agriculture related works. Also in the upcoming times agricultural commodities will see a boom.

The presence of Ketu in zodiac sign Scorpio, the eighth zodiac sign of Kaal Purush in the twelfth house of the horoscope, is indicating a proxy war, further suggesting that a situation of conflict and war can get created between countries in the upcoming times. Of Course it may take time for the war to come into effect, but tensions will get manifested. This is the reason that most of the countries can spend most of their money in military activities which may increase the economic crisis but from June-July onwards, situations will alter and the economic challenges will gradually end.

Ascendant Lord Jupiter is in a strong position in the lagna and also aspecting the fifth, seventh and ninth house which will cause a wave of righteousness in the country and some important judgements can be directed by the court to strengthen law and order within the country. The same Jupiter is also pointing towards some economic reforms.

Because of the grace of Shani Dev or Lord Saturn, the prices of items related to gas and oil will continue to rise. Along with this, the benefactor of business is the planet Mercury, which is in the zodiac sign of its friend Venus, along with the Sun and Moon. These are also significator of communication, due to which a new revolution can be seen in the means of communication and some new announcements can be made by the government to get the communication sector out of the crisis. However, due to the aspection of Mars and Saturn on the planet Mercury, there may be more emphasis on selling in the stock market. In the case of metals, the bullion market may see a boom soon after some recession.

Mangal Dev or the planet Mars present in the fourth house is indicating that the real estate sector is likely to boom. The inclination of people will also increase further in this area and this may increase the prices of property.

Venus is present in the tenth house and this is indicating some amount of positivity. Hence, it can be stated that this Diwali will bring good information for women and this year women will remain on the dominant front  and some can be given certain special status or any special facility by the government but on the contrary, the aspection of Mars on Venus may increase the rate of atrocities against women at the same time.

If we look at the horoscope for the day of Kartik Amavasya as well as the horoscope of independent India, then we will see that Saturn’s sub period(Antar Dasha) in the major period (Maha Dasha) of the Moon will be effective till the mid of July 2021, due to which the economy will remain in low spirits and gradually some reforms will be visible, but since July, when Mercury’s sub period (Antar Dasha) begins, the banking sector will see a boom and due to some policies of the government, there may be some changes in the tax system. From this time onwards, the economic system of the country will start lifting upwards rapidly and we can expect that the second half of the year 2021 to bring a golden time for our country financially.

Also, you can click here to have a word with Astro Guru Mragaank Sharma and find all the ways to overcome your problems.